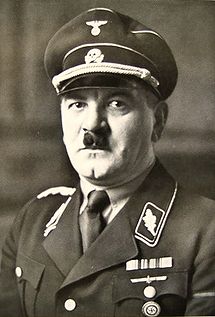 Julius Schreck was an early Nazi Party member and also the first commander of the Schutzstaffel
Schutzstaffel
The Schutzstaffel |Sig runes]]) was a major paramilitary organization under Adolf Hitler and the Nazi Party. Built upon the Nazi ideology, the SS under Heinrich Himmler's command was responsible for many of the crimes against humanity during World War II...
(SS).

Schreck joined the Nazi Party in 1920, at about the same time as Adolf Hitler
Adolf Hitler
Adolf Hitler was an Austrian-born German politician and the leader of the National Socialist German Workers Party , commonly referred to as the Nazi Party). He was Chancellor of Germany from 1933 to 1945, and head of state from 1934 to 1945...
, and the two developed a deep friendship in the early days of Nazi history. Schreck had also served in World War I
World War I
World War I , which was predominantly called the World War or the Great War from its occurrence until 1939, and the First World War or World War I thereafter, was a major war centred in Europe that began on 28 July 1914 and lasted until 11 November 1918...
and was a member of the Freikorps
Freikorps
Freikorps are German volunteer military or paramilitary units. The term was originally applied to voluntary armies formed in German lands from the middle of the 18th century onwards. Between World War I and World War II the term was also used for the paramilitary organizations that arose during...
.

In 1921 Schreck was one of the founders of the Sturmabteilung
Sturmabteilung
The Sturmabteilung functioned as a paramilitary organization of the National Socialist German Workers' Party . It played a key role in Adolf Hitler's rise to power in the 1920s and 1930s...
(SA) and also helped form the Stabswache, which was an early company of SA troops assigned as bodyguards to Hitler. In 1923, Schreck participated in the Beer Hall Putsch
Beer Hall Putsch
The Beer Hall Putsch was a failed attempt at revolution that occurred between the evening of 8 November and the early afternoon of 9 November 1923, when Nazi Party leader Adolf Hitler, Generalquartiermeister Erich Ludendorff, and other heads of the Kampfbund unsuccessfully tried to seize power...
and was incarcerated at Landsberg Prison
Landsberg Prison
Landsberg Prison is a penal facility located in the town of Landsberg am Lech in the southwest of the German state of Bavaria, about west of Munich and south of Augsburg....
along with other top Nazi leaders.

When the Nazi Party was refounded in 1925, Schreck was asked by Emil Maurice
Emil Maurice
Emil Maurice was an early member of the Nazi Party and is regarded by historians as the founder of the SS. A watchmaker by trade, Maurice was a close associate of Adolf Hitler with a personal friendship dating back to at least 1919...
to help found a new bodyguard company for Hitler which would be known as the Stosstrupp Adolf Hitler. Later that year, the group of eight men was renamed as the Schutzstaffel and Schreck became SS Member number 5. He was also asked by Hitler to command the bodyguard company and, as such, became the first Reichsführer-SS
Reichsführer-SS
was a special SS rank that existed between the years of 1925 and 1945. Reichsführer-SS was a title from 1925 to 1933 and, after 1934, the highest rank of the German Schutzstaffel .-Definition:...
(although Schreck never referred to himself by this title).

In 1926, Schreck stood down as Reichführer-SS. He remained on the SS rolls as an SS-Führer
Führer
Führer , alternatively spelled Fuehrer in both English and German when the umlaut is not available, is a German title meaning leader or guide now most associated with Adolf Hitler, who modelled it on Benito Mussolini's title il Duce, as well as with Georg von Schönerer, whose followers also...
and worked as Hitler’s private chauffeur
Chauffeur
A chauffeur is a person employed to drive a passenger motor vehicle, especially a luxury vehicle such as a large sedan or limousine.Originally such drivers were always personal servants of the vehicle owner, but now in many cases specialist chauffeur service companies, or individual drivers provide...
. In 1930, after the SS had begun to expand under Heinrich Himmler
Heinrich Himmler
Heinrich Luitpold Himmler was Reichsführer of the SS, a military commander, and a leading member of the Nazi Party. As Chief of the German Police and the Minister of the Interior from 1943, Himmler oversaw all internal and external police and security forces, including the Gestapo...
, Schreck was appointed as an SS-Standartenführer
Standartenführer
Standartenführer was a Nazi Party paramilitary rank that was used in the so-called Nazi combat-organisations: SA, SS, NSKK and the NSFK...
but had little actual power.

In 1936, Julius Schreck developed meningitis and died on May 16th. He was honored in a Nazi state funeral with Adolf Hitler delivering his eulogy.
The source of this article is wikipedia, the free encyclopedia.  The text of this article is licensed under the GFDL.