Juist is 17 km long and 500 m to 1 km wide (this depends on the level of tide
Tide
Tides are the rise and fall of sea levels caused by the combined effects of the gravitational forces exerted by the moon and the sun and the rotation of the Earth....
, which sinks and falls about 2.5 m in 6 hours). There are two villages on the island: the main village Juist, and Loog. 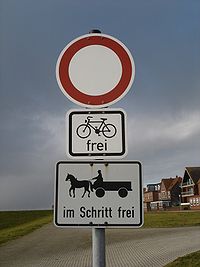 Juist can be reached from Norddeich
Norddeich (Norden)
Norddeich is a village in the borough of Norden in north Germany with 1,734 inhabitants. It lies in northwestern East Frisia on the North Sea coast....
train station and ferry port on the East Frisia
East Frisia
East Frisia or Eastern Friesland is a coastal region in the northwest of the German federal state of Lower Saxony....
n mainland by the ferries of Reederei Norden-Frisia Frisia II, Frisia VI, Frisia IX, Frisia X at high tide - that means usually only once a day.

A non-tide-dependent way to reach the island is offered by the Airline FLN, though the weather conditions are sometimes - especially in winter - so bad that the airline has to cancel all flights for a day.
Their 4-seat Cessna
Cessna
The Cessna Aircraft Company is an airplane manufacturing corporation headquartered in Wichita, Kansas, USA. Their main products are general aviation aircraft. Although they are the most well known for their small, piston-powered aircraft, they also produce business jets. The company is a subsidiary...
and their four 10-seat Britten-Norman Islander
Britten-Norman Islander
The Britten-Norman BN-2 Islander is a 1960s British light utility aircraft, regional airliner and cargo aircraft designed and originally manufactured by Britten-Norman of the United Kingdom. The Islander is one of the best-selling commercial aircraft types produced in Europe. Although designed in...
s serve Juist airport, which has the second highest number of movements in Lower Saxony after the capital airport Hannover.

The passage by ship takes - depending on the wind and the water level - about 90 minutes; a flight takes just 7 minutes.

Only the fire department, the German Red Cross and doctors have motor vehicles - the police have only 'office bikes'. The post office and the shipping company each have one electric car.
Some institutions like the shipping company and a branch of the Coastal defence authority have tractors, but need a special license, every time they want to navigate through the town. All other transports like garbage collection, building material, guest luggage, pizza service etc. are done by bike or horse-drawn carriage. 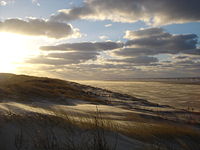 What you can see from the North Sea as 'skyline' are just two buildings: the water tower and an old hotel, which looks a bit like the German Reichstag
Reichstag (building)
The Reichstag building is a historical edifice in Berlin, Germany, constructed to house the Reichstag, parliament of the German Empire. It was opened in 1894 and housed the Reichstag until 1933, when it was severely damaged in a fire. During the Nazi era, the few meetings of members of the...
since its restoration.
The lighthouse at the port is not high enough to be seen from the North Sea - has no nautical importance, not even for the ferries to the island.
Its use is rather to make the port area look nicer.

A natural specialty is lake Hammersee, a fresh water lake in the western third of the island.
In the 17th and 18th century Juist was cut in two parts by several storm tide
Storm tide
A storm tide is a tide with a high flood period caused by a storm. Storm tides can be a severe danger to the coast and the people living along the coast. The water level can rise to more than 5 meters above the normal tide....
s (see St. Peter's Flood
St. Peter's Flood
St. Peter's Flood refers to two separate storm tides that struck the coasts of Netherlands and Northern Germany in 1651. During the first storm tide, on 22 February, the East Frisian island of Juist was split in two...
).
Around the year 1770 people started to close the 2 km wide burst at the southern side by a dune dike.
As recently as 1928 the northern side was repaired.
By that time, the water in the lake had turned from saltwater to freshwater.
Sinead Morrissey's poem 'Restoration' uses Juist as a metaphor for isolation.


Sweet water, where salt water is all around

Juist is - seen with the geologist's eye - nothing but sand.
Rain water which drips into the sand has a lower density than saltwater, which makes a kind of fresh water bubble float over the saltwater around and deep under the island.
That's why Juist island does not have a fresh water pipeline to the mainland - and it is also what made the Hammersee turn into a fresh water lake.

Bill is northern German dialect word for 'butt' and 'end'.
At the western end of Juist, there is a large sandbank, the "Billreef". It looks absolutely empty like a sand desert.
But with a spyglass, especially during bird migration time, one can see large flocks of birds that will rest on the island, up to 30,000 at one time.
The Dunlin
Dunlin
The Dunlin, Calidris alpina, is a small wader, sometimes separated with the other "stints" in Erolia. It is a circumpolar breeder in Arctic or subarctic regions. Birds that breed in northern Europe and Asia are long-distance migrants, wintering south to Africa, southeast Asia and the Middle East...
, Grey Plover
Grey Plover
The Grey Plover , known as the Black-bellied Plover in North America, is a medium-sized plover breeding in arctic regions. It is a long-distance migrant, with a nearly worldwide coastal distribution when not breeding....
and Knot
Red Knot
The Red Knot, Calidris canutus , is a medium sized shorebird which breeds in tundra and the Arctic Cordillera in the far north of Canada, Europe, and Russia. It is a large member of the Calidris sandpipers, second only to the Great Knot...
have a long way to go - for example from Tamyr peninsula in Siberia and to Africa.
Their break in the Wadden Sea is essential, because these birds need to eat a lot of food in the shortest time possible to move on quickly.
That's why Billreef is a natural reserve.

The beach and the dunes are eroded by the sea in the western part of Juist. The edge of the dunes moves about five meters to the south each winter.
Things like this happen on every East Frisian island - some islands moved so far that the town had to be rebuilt several times. Every island except Juist and Langeoog
Langeoog
Langeoog is one of the seven inhabited East Frisian Islands at the edge of the Lower Saxon Wadden Sea in the southern North Sea, located between Baltrum Island , and Spiekeroog . It is also a municipality in the district of Wittmund in Lower Saxony, Germany. The name Langeoog means Long Island in...
have big concrete groyne at their western end.

Tourism is the main source of income for Juist's economy. In almost all the buildings on the island are guestrooms. There are also several hotels and a youth hostel.

Because of its unpolluted air, the island is popular for those with respiratory complaints.{cn}}

On September 9, 2001 Juist citizen voted for their mayor directly for the first time. Karl-Josef Wederhake won the election. He was re-elected in September 2006.

There is an island partnership between Juist and Hiddensee
Hiddensee
Hiddensee is a carfree island in the Baltic Sea, located west of Rügen on the German coast.The island, located 54°33' north longitude 13°07' east, has about 1,300 inhabitants. It was a popular vacation destination for East German tourists during German Democratic Republic times and continues to...
in Baltic Sea
Baltic Sea
The Baltic Sea is a brackish mediterranean sea located in Northern Europe, from 53°N to 66°N latitude and from 20°E to 26°E longitude. It is bounded by the Scandinavian Peninsula, the mainland of Europe, and the Danish islands. It drains into the Kattegat by way of the Øresund, the Great Belt and...
.