After Fairey Aviation
Fairey Aviation
The Fairey Aviation Company Limited was a British aircraft manufacturer of the first half of the 20th century based in Hayes in Greater London and Heaton Chapel and RAF Ringway in Greater Manchester...
acquired the Britten-Norman company, their Islanders and Trislander aircraft were built in Romania, then shipped to Avions Fairey
Avions Fairey
Avions Fairey was the Belgian-based subsidiary of the British Fairey Aviation that built Fairey aircraft designs for the Belgian government.-History:...
for finishing and then flown to the UK for flight certification.
Britten-Norman was started in 1953 to convert and operate agricultural aircraft.

Hey guys!! I urgently need spares for a BN-2B 260HP. where would be the best place ? mainly airframe parts. Thanks Ira from Chile.

HELLO, Thinking of buying a BN 2 A manufactured in 1974 in Romania. Just wondering if parts for this aircraft are still available. Also if the hom...
More 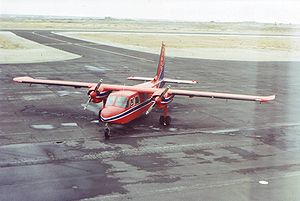 Britten-Norman was started in 1953 to convert and operate agricultural aircraft. It also produced hovercraft (Cushioncraft
Cushioncraft
Cushioncraft Ltd was a British engineering company, formed in 1960 as a division of Britten-Norman Ltd to develop/build hovercraft. Originally based at Bembridge Airport on the Isle of Wight, Cushioncraft later moved to the Duver Works at St...
, later sold to the British Hovercraft Corporation
British Hovercraft Corporation
British Hovercraft Corporation was the corporate entity created when the Saunders Roe division of Westland Aircraft and Vickers Supermarine combined March 1966 with the intention of creating viable commercial hovercraft - .None of the Vickers designs were 'taken forward', the...
). Design of the Islander started in 1963 and the first prototype BN-2 first flew on 13 June 1965, with the second prototype on 20 August 1966. Both of these aircraft had engines that were less powerful than the production versions. The Islander is a high-wing cantilever monoplane with a rectangular fuselage and two wing-mounted engines. The fuselage, which has a conventional tail unit and fixed tricycle landing gear, will usually accommodate one pilot and up to nine passengers.

The production Islander first flew on 24 April 1967 and was certified in August 1967. Production started at the Britten-Norman factory at Bembridge
Bembridge
Bembridge is an affluent village and civil parish located on the easternmost point of the Isle of Wight. It had a population of 3,848 according to the 2001 census of the United Kingdom, leading to claims by residents that Bembridge is the largest village in England, and occasional claims that it is...
, Isle of Wight but within a few years the company could not keep up with demand; a contract was placed with IRMA of Romania, initially to produce aircraft from a kit of parts but the Romanian factory soon became the main source for production Islanders. A military version of the Islander, marketed as the Defender
Britten-Norman Defender
|-External links:*...
and first flown in 1970, had underwing hardpoint
Hardpoint
A hardpoint, or weapon station, is any part of an airframe designed to carry an external load. This includes a point on the wing or fuselage of military aircraft where external ordnance, countermeasures, gun pods, targeting pods or drop tanks can be mounted.-Rail launchers:Large missiles and...
s and was fitted out as a light troop transport and support aircraft.

The second prototype was developed into a stretched Super Islander but the program was stopped and the aircraft was used as a basis of the three-engined version, the Trislander. The company had financial difficulties and by the end of 1970 went into receivership. In 1972 the company was bought by the Fairey Aviation
Fairey Aviation
The Fairey Aviation Company Limited was a British aircraft manufacturer of the first half of the 20th century based in Hayes in Greater London and Heaton Chapel and RAF Ringway in Greater Manchester...
Group and production of the Islander and Trislander was moved to their factory (Avions Fairey
Avions Fairey
Avions Fairey was the Belgian-based subsidiary of the British Fairey Aviation that built Fairey aircraft designs for the Belgian government.-History:...
) in Gosselies
Gosselies
Gosselies is a section of the Belgian town of Charleroi within the Walloon region in the Province of Hainaut. It was a commune of its own before the merger of the communes in 1977. Gosselies is the home for the headquarters of Caterpillar Belgium, and Solar Turbines Europe....
, Belgium
Belgium
Belgium , officially the Kingdom of Belgium, is a federal state in Western Europe. It is a founding member of the European Union and hosts the EU's headquarters, and those of several other major international organisations such as NATO.Belgium is also a member of, or affiliated to, many...
although the aircraft were flown to Bembridge for final customer preparation. The new company developed the Turbo Islander with Lycoming LTP101 turboprops but the engines were too powerful for the aircraft and the design evolved into the Turbine Islander (BN-2T) with Allison 250 turboprops. Fairey then suffered financial problems and called in the receiver and the Fairey Britten-Norman company was sold to Pilatus
Pilatus Aircraft
Pilatus Aircraft Ltd. is an aircraft manufacturer located in Stans, Switzerland. The company employs more than 1,100 people.-History:The company was established in 1939, but it was not until 1944 that a Pilatus-built aircraft, the SB-2 Pelican, first took to the air...
of Switzerland.

An improved version, the BN-2A Islander, first flew in 1969. It incorporated aerodynamic and flight equipment improvements as well as changes to the baggage arrangements.

In 1977 a standard BN-2 was re-engined with Dowty ducted fans. It was later reverted back to standard engines and sold.

In 1978 a further improved version, the BN-2B Islander II was introduced. Improvements included increased carrying capacity and propeller modifications to reduce noise levels. Options included a long-nosed version for increased baggage capacity, raked wingtip auxiliary fuel tanks and twin Allison 250-B17C turboprop
Turboprop
A turboprop engine is a type of turbine engine which drives an aircraft propeller using a reduction gear.The gas turbine is designed specifically for this application, with almost all of its output being used to drive the propeller...
engines. When the latter are installed the aircraft is designated the BN-2T Turbine Islander.

The Defender 4000 is a military conversion of the Islander, capitalizing on its rugged structure for use in Third World countries. Purchases from police and military customers centres around use in surveillance and counter-terrorism operations. The Maritime Defender is another military version of the Islander, intended for search and rescue, coastal patrol and fishery protection.

Companies in addition to Britten-Norman have manufactured the Islander.

IRMA
IRMA
IRMA may refer to:* Institute of Rural Management, Anand, a management school for rural development in the state of Gujarat, India* International Recording Media Association*International Rectal Microbicide Advocates...
from Romania
Romania
Romania is a country located at the crossroads of Central and Southeastern Europe, on the Lower Danube, within and outside the Carpathian arch, bordering on the Black Sea...
has been building the aircraft since 1969, as have SONACA
SONACA
SONACA is a Belgian company which in 1979 received its name after its parent company Fairey fell into financial heavy in 1977 and the Belgian government felt compelled to take over its Belgian subsidiary Avions Fairey at Gosselies. This was done partly to calm social unrest but also to keep the...
(Avions Fairey
Avions Fairey
Avions Fairey was the Belgian-based subsidiary of the British Fairey Aviation that built Fairey aircraft designs for the Belgian government.-History:...
), in Gosselies, Belgium.

A BN-2A-2 with increased wingspan and fitted with extra wingtip fuel tanks.

A BN-2A-6 with increased wingspan and fuel capacity.

A BN-2A-2 with increased takeoff weight and minor improvements.

A BN-2A-3 with increased takeoff weight.

A BN-2A-8 with increased takeoff weight.

A BN-2A-9 with increased takeoff weight.

A BN-2A-20 fitted with floats. Twin floats were attached to the undercarriage legs and incorporated retractable landing gear.

A BN-2A-20 with improved soundproofing and increased landing weight and other minor modifications.

A BN-2A-21 with Model B improvements.

A BN-2A-26 with Model B improvements.

A BN-2A-27 with Model B improvements.

Twin-engined communications, reconnaissance aircraft for the British Army
British Army
The British Army is the land warfare branch of Her Majesty's Armed Forces in the United Kingdom. It came into being with the unification of the Kingdom of England and Scotland into the Kingdom of Great Britain in 1707. The new British Army incorporated Regiments that had already existed in England...
; seven built. Used for aerial reconnaissance and photography
Aerial photography
Aerial photography is the taking of photographs of the ground from an elevated position. The term usually refers to images in which the camera is not supported by a ground-based structure. Cameras may be hand held or mounted, and photographs may be taken by a photographer, triggered remotely or...
in Northern Ireland
Northern Ireland
Northern Ireland is one of the four countries of the United Kingdom. Situated in the north-east of the island of Ireland, it shares a border with the Republic of Ireland to the south and west...
during Operation Banner
Operation Banner
Operation Banner was the operational name for the British Armed Forces' operation in Northern Ireland from August 1969 to July 2007. It was initially deployed at the request of the Unionist government of Northern Ireland to support the Royal Ulster Constabulary . After the 1998 Belfast Agreement,...
. They were part of No. 1 Flight, Army Air Corps and were based at Aldergrove
RAF Aldergrove
RAF Aldergrove was a Royal Air Force station situated northwest of Belfast. It adjoined Belfast International Airport, sometimes referred to simply as Aldergrove which is the name of the surrounding area...
.