Encyclopedia
Judith is an opera in five acts, composed by Alexander Serov
Alexander Serov
Alexander Nikolayevich Serov – was a Russian composer and music critic. He and his wife Valentina were the parents of painter Valentin Serov...
during 1861-1863. Derived from renditions of the story of Judith from the Old Testament Apocrypha
Apocrypha
The term apocrypha is used with various meanings, including "hidden", "esoteric", "spurious", "of questionable authenticity", ancient Chinese "revealed texts and objects" and "Christian texts that are not canonical"....
, the Russian
Russian language
Russian is a Slavic language used primarily in Russia, Belarus, Uzbekistan, Kazakhstan, Tajikistan and Kyrgyzstan. It is an unofficial but widely spoken language in Ukraine, Moldova, Latvia, Turkmenistan and Estonia and, to a lesser extent, the other countries that were once constituent republics...
libretto, though credited to the composer, has a complicated history (see below). The premiere took place in 1863 in Saint Petersburg
Saint Petersburg
Saint Petersburg is a city and a federal subject of Russia located on the Neva River at the head of the Gulf of Finland on the Baltic Sea...
. This stage debut, supplemented with his next opera Rogneda
Rogneda (opera)
Rogneda is an opera in five acts, composed by Alexander Serov during 1863–1865. The scenario, by the composer, was based on the novel Askold's Grave by Mikhail Zagoskin and the poem Rogneda by Kondraty Ryleyev...
, made Serov the most important Russian opera composer of the 1860s.

Despite completely lacking in "Russian" subject matter as well as being not the first opera based on the story of Judith, Serov's setting has great significance for the history of Russian music. Besides its success with the public (enhanced by Fyodor Chaliapin's portrayal of Holofernes beginning in 1898), Serov's Judith influenced later Russian composers, including:


The Eastern element in Judith is most obvious in Acts III and IV; its influence (presaged by Glinka
Mikhail Glinka
Mikhail Ivanovich Glinka , was the first Russian composer to gain wide recognition within his own country, and is often regarded as the father of Russian classical music...
in Ruslan and Lyudmila) can be detected by comparing the Indian Song from Act IV with the "Song of the Indian Guest" from Rimsky-Korsakov's
Nikolai Rimsky-Korsakov
Nikolai Andreyevich Rimsky-Korsakov was a Russian composer, and a member of the group of composers known as The Five.The Five, also known as The Mighty Handful or The Mighty Coterie, refers to a circle of composers who met in Saint Petersburg, Russia, in the years 1856–1870: Mily Balakirev , César...
Sadko
Sadko (opera)
Sadko is an opera in seven scenes by Nikolai Rimsky-Korsakov. The libretto was written by the composer, with assistance from Vladimir Belsky, Vladimir Stasov, and others. Rimsky-Korsakov was first inspired by the bylina of Sadko in 1867, when he completed a tone poem on the subject, his Op. 5...
. 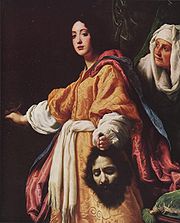 At midday in a square in Bethulia, which is still under siege by Holofernes and his Assyrian troops, the people suffer from despair and thirst. The elders Ozias and Charmi report that all the roads are now cut off, and the last source of water has dried up. The high priest Eliachim, however, hopes for a miracle, but the people want to surrender the city to end their suffering. The elders ask them to wait five more days and nights; after that time, if God does not deliver them, the city will let the enemy in. Jewish warriors then come through the gates holding Achior. He tried to persuade Holofernes to stop the siege and follow the God of the Jews; as punishment, Holofernes had him bound and left near the city to share in the Jews' destruction by the Assyrians. Everyone then prays to God for deliverance.

Judith, alone in her room, decides that, instead of waiting five days, something must be done now. She devises a plan to use the beauty God gave her get to trick Holofernes and save her people. To her summons the elders arrive. She expresses her pro-active intentions and asks for permission to go the enemy camp with her slave Avra. They grant permission and leave. When Avra then tries to talk her out of going to the camp, Judith remains steadfast.

In Holofernes' camp, odalisques perform songs and dances. Holofernes sends them away, intent on his plan to make a full attack on Bethulia the next day. Judith is let into the camp and presented to Holofernes, who is enchanted by her beauty (as are all the Assyrians). When he inquires as to her purpose, she pretends that she will show him a secret way to enter and take Bethulia and Jerusalem as long as he allows her to move freely. Holofernes believes her ruse, even to the point of asking her to be queen. The camp then celebrates the power of Babylon.

Dances and songs once more resound in the camp. Amidst praise of comely Judith, Asfaneses makes an unfortunate remark about her coldness, and is immediately stabbed to death by Holofernes. Just then Judith comes out and is horrified by the grisly act, but remains resolved in her plan. He informs her that the city will be attacked the next day. In a drunken stupor Holofernes falls to the ground unconscious at Judith's feet. After he is placed on his bed, she remains with him as everyone else leaves. Within the tent she takes his sword and decapitates him. After asking Avra to put the head into a sack, the two of them leave quickly.

In Bethulia the people, awaiting the dawn of the sixth day, are ready to open the gates to the Assyrians, despite pleadings from the high priest. Suddenly Judith is heard outside the gates, and she shows them the head of Holofernes. The sounds of the fleeing Assyrian troops are confirmed by Ozias' report. All sing praise to God for answering their prayers.