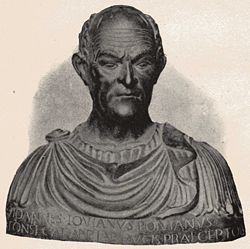 Iovianus Pontanus (1426 – September 17, 1503) was an Italian
Italy
Italy , officially the Italian Republic languages]] under the European Charter for Regional or Minority Languages. In each of these, Italy's official name is as follows:;;;;;;;;), is a unitary parliamentary republic in South-Central Europe. To the north it borders France, Switzerland, Austria and...
humanist
Renaissance humanism
Renaissance humanism was an activity of cultural and educational reform engaged by scholars, writers, and civic leaders who are today known as Renaissance humanists. It developed during the fourteenth and the beginning of the fifteenth centuries, and was a response to the challenge of Mediæval...
and poet
Poet
A poet is a person who writes poetry. A poet's work can be literal, meaning that his work is derived from a specific event, or metaphorical, meaning that his work can take on many meanings and forms. Poets have existed since antiquity, in nearly all languages, and have produced works that vary...
.

Pontanus was born at Cerreto
Cerreto di Spoleto
Cerreto di Spoleto is an Italian village and comune of the province of Perugia in Umbria. It is a dispersed, rural community with 1,158 inhabitants spread over 8 frazioni...
in the Duchy of Spoleto
Duchy of Spoleto
The independent Duchy of Spoleto was a Lombard territory founded about 570 in central Italy by the Lombard dux Faroald.- Lombards :The Lombards, a Germanic people, had invaded Italy in 568 and conquered much of it, establishing a Kingdom divided between several dukes dependent on the King, who had...
, where his father was murdered in one of the frequent civil brawls which then disturbed the peace of Italian towns.

His mother escaped with the boy to Perugia
Perugia
Perugia is the capital city of the region of Umbria in central Italy, near the River Tiber, and the capital of the province of Perugia. The city is located about north of Rome. It covers a high hilltop and part of the valleys around the area....
, and it was here that Pontano received his first instruction in languages and literature. Failing to recover his patrimony, he abandoned Umbria
Umbria
Umbria is a region of modern central Italy. It is one of the smallest Italian regions and the only peninsular region that is landlocked.Its capital is Perugia.Assisi and Norcia are historical towns associated with St. Francis of Assisi, and St...
, and at the age of twenty-two established himself at Naples
Naples
Naples is a city in Southern Italy, situated on the country's west coast by the Gulf of Naples. Lying between two notable volcanic regions, Mount Vesuvius and the Phlegraean Fields, it is the capital of the region of Campania and of the province of Naples...
, which continued to be his chief place of residence during a long and prosperous career. He here began a close friendship with the distinguished scholar, Antonio Beccadelli
Antonio Beccadelli
Antonio Beccadelli , called Il Panormita , was an Italian poet, canon lawyer, scholar, diplomat, and chronicler. He generally wrote in Latin...
, through whose influence he gained admission to the royal chancery of Alphonso the Magnanimous
Alfonso V of Aragon
Alfonso the Magnanimous KG was the King of Aragon , Valencia , Majorca, Sardinia and Corsica , and Sicily and Count of Barcelona from 1416 and King of Naples from 1442 until his death...
. Alphonso discerned the singular gifts of the young scholar, and made him tutor to his sons, notably Alfonso
Alfonso II of Naples
Alfonso II of Naples , also called Alfonso II d'Aragon, was King of Naples from 25 January 1494 to 22 February 1495 with the title King of Naples and Jerusalem...
, who would reign for a single year but whose energies in the decade 1485-95 brought the Renaissance to Naples in many fields, from poetry to villas, from portrait sculpture to fortifications. Pontano's connection with the Aragonese dynasty as political adviser, military secretary and chancellor was henceforth a close one; he passed from tutor to cultural advisor to Alfonso. The most doubtful passage in his diplomatic career is when he welcomed Charles VIII of France
Charles VIII of France
Charles VIII, called the Affable, , was King of France from 1483 to his death in 1498. Charles was a member of the House of Valois...
upon the entry of that king into Naples in 1495, thus showing that he was too ready to abandon the princes upon whose generosity his fortunes had been raised.

Pontano illustrates in a marked manner the position of power to which men of letters and learning had arrived in Italy. He entered Naples as a penniless scholar. He was almost immediately made the companion and trusted friend of its sovereign, loaded with honours, lodged in a fine house, enrolled among the nobles of the realm, enriched, and placed at the very height of social importance. Following the example of Pomponio Leto in Rome
Rome
Rome is the capital of Italy and the country's largest and most populated city and comune, with over 2.7 million residents in . The city is located in the central-western portion of the Italian Peninsula, on the Tiber River within the Lazio region of Italy.Rome's history spans two and a half...
and of Cosimo de' Medici
Cosimo de' Medici
Còsimo di Giovanni degli Mèdici was the first of the Medici political dynasty, de facto rulers of Florence during much of the Italian Renaissance; also known as "Cosimo 'the Elder'" and "Cosimo Pater Patriae" .-Biography:Born in Florence, Cosimo inherited both his wealth and his expertise in...
at Florence
Florence
Florence is the capital city of the Italian region of Tuscany and of the province of Florence. It is the most populous city in Tuscany, with approximately 370,000 inhabitants, expanding to over 1.5 million in the metropolitan area....
, Pontano founded an academy for the meetings of learned and distinguished men. This became the centre of fashion as well as of erudition in the southern capital, and subsisted long after its founder's death.

In 1461 he married his first wife, Adriana Sassone, who bore him one son and three daughters before her death in 1491. Nothing distinguished Pontano more than the strength of his domestic feeling. He was passionately attached to his wife and children; and, while his friend Beccadelli signed the licentious verses of Hermaphroditus
Hermaphroditus
In Greek mythology, Hermaphroditus or Hermaphroditos was the child of Aphrodite and Hermes. He was a minor deity of bisexuality and effeminacy. According to Ovid, born a remarkably handsome boy, he was transformed into an androgynous being by union with the water nymph Salmacis...
, his own Muse
Muse
The Muses in Greek mythology, poetry, and literature, are the goddesses who inspire the creation of literature and the arts. They were considered the source of the knowledge, related orally for centuries in the ancient culture, that was contained in poetic lyrics and myths...
celebrated in liberal but loyal strains the pleasures of conjugal affection, the charm of infancy and the sorrows of a husband and a father in the loss of those he loved. Not long after the death of his first wife Pontano took in second marriage a beautiful girl of Ferrara
Ferrara
Ferrara is a city and comune in Emilia-Romagna, northern Italy, capital city of the Province of Ferrara. It is situated 50 km north-northeast of Bologna, on the Po di Volano, a branch channel of the main stream of the Po River, located 5 km north...
, who is only known to us under the name of Stella.

Although he was at least sixty-five years of age at this period, his poetic faculty displayed itself with more than usual warmth and lustre in the glowing series of elegies, styled Eridanus, which he poured forth to commemorate the rapture of this union. Stella's one child, Luciio, survived his birth but fifty days; nor did his mother long remain to comfort the scholar's old age. Pontano had already lost his only son by the first marriage; therefore his declining years were solitary. He died in 1503 at Naples, where a remarkable group of terracotta figures, life-sized and painted, still adorns his tomb in the church of Monte Oliveto. He is there represented together with his patron Alfonso and his friend Jacopo Sannazaro
Jacopo Sannazaro
Jacopo Sannazaro was an Italian poet, humanist and epigrammist from Naples.He wrote easily in Latin, in Italian and in Neapolitan, but is best remembered for his humanist classic Arcadia, a masterwork that illustrated the possibilities of poetical prose in Italian, and instituted the theme of...
in adoration before the dead Christ.

As a diplomat and state official Pontano played a part of some importance in the affairs of southern Italy and in the Barons' War, the wars with the Papacy, and the expulsion and restoration of the Aragonese dynasty. But his chief claim is as a scholar. His writings divide themselves into dissertations upon such topics as the "Liberality of Princes", "Ferocity" or "Magnificence", in which he argued that architecture and great monuments were the mark of a great ruler, composed in the rhetoric
Rhetoric
Rhetoric is the art of discourse, an art that aims to improve the facility of speakers or writers who attempt to inform, persuade, or motivate particular audiences in specific situations. As a subject of formal study and a productive civic practice, rhetoric has played a central role in the Western...
al style of the day, and his poems.

He was distinguished for energy of Latin style, for vigorous intellectual powers, and for the faculty, rare among his contemporaries, of expressing the facts of modern life, the actualities of personal emotion, in language sufficiently classical yet always characteristic of the man. His prose treatises are more useful to students of manners than the similar lucubrations of Poggio Bracciolini. Yet it was principally as a Latin poet that he exhibited his full strength. An ambitious didactic composition in hexameter
Hexameter
Hexameter is a metrical line of verse consisting of six feet. It was the standard epic metre in classical Greek and Latin literature, such as in the Iliad and Aeneid. Its use in other genres of composition include Horace's satires, and Ovid's Metamorphoses. According to Greek mythology, hexameter...
s, entitled Urania, embodying the astronomical science of the age, and adorning this high theme with brilliant mythological episodes, won the admiration of Italy. It still remains a monument of fertile invention, exuberant facility and energetic handling of material. Not less excellent is the didactic poem on orange trees, De hortis Hesperidum. His most original compositions in verse, however, are elegiac
Elegy
In literature, an elegy is a mournful, melancholic or plaintive poem, especially a funeral song or a lament for the dead.-History:The Greek term elegeia originally referred to any verse written in elegiac couplets and covering a wide range of subject matter, including epitaphs for tombs...
and hendecasyllabic pieces on personal topics — the De conjugali amore, Eridanus, Tumuli, Naeniae, Baiae, in which he uttered his vehemently passionate emotions with a warmth of colouring, an evident sincerity, and a truth of painting from reality which excuse their erotic freedom.

Pontano's prose and poems were printed by Aldus Manutius
Aldus Manutius
Aldus Pius Manutius , the Latinised name of Aldo Manuzio —sometimes called Aldus Manutius, the Elder to distinguish him from his grandson, Aldus Manutius, the Younger—was an Italian humanist who became a printer and publisher when he founded the Aldine Press at Venice.His publishing legacy includes...
at Venice. Pontano's Latin translation of Claudius Ptolemy's astrological work, the Tetrabiblos
Tetrabiblos
The Tetrabiblos , also known under the Latin title Quadripartitum , is a text on the philosophy and practice of astrology, written in the second century AD by the Alexandrian scholar Claudius Ptolemy ....
(or Quadripartitum) was first printed in 1535 as part of Joachim Camerarius
Joachim Camerarius
Joachim Camerarius , the Elder was a German classical scholar.-Life:He was born at Bamberg, Bavaria...
first portfolio edition that also included the Greek text.