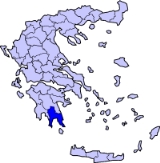 Overview
Laconia also known as Lacedaemonia, is one of the regional units of Greece. It is part of the region of Peloponnese. It is situated in the southeastern part of the Peloponnese
Peloponnese
The Peloponnese, Peloponnesos or Peloponnesus , is a large peninsula , located in a region of southern Greece, forming the part of the country south of the Gulf of Corinth...
peninsula. Its administrative capital is Sparti
Sparti (municipality)
Sparti is a municipality of Laconia, Greece. It lies at the site of ancient Sparta. The population in 2001 was 38,079, of whom 15,828 lived in the town itself.-History:...
(Sparta). The word "laconic
Laconic phrase
A laconic phrase is a very concise or terse statement, named after Laconia , a polis of ancient Greece surrounding the city of Sparta proper. In common usage, Sparta referred both to Lacedaemon and Sparta...
" is derived from the name of the region by analogy - to speak in a concise way, as the Spartans were reputed by the Athenians
Athens
Athens , is the capital and largest city of Greece. Athens dominates the Attica region and is one of the world's oldest cities, as its recorded history spans around 3,400 years. Classical Athens was a powerful city-state...
to do.
Laconia borders on Messenia
Messenia
Messenia is a regional unit in the southwestern part of the Peloponnese region, one of 13 regions into which Greece has been divided by the Kallikratis plan, implemented 1 January 2011...
to the west, and Arcadia
Arcadia
Arcadia is one of the regional units of Greece. It is part of the administrative region of Peloponnese. It is situated in the central and eastern part of the Peloponnese peninsula. It takes its name from the mythological character Arcas. In Greek mythology, it was the home of the god Pan...
to the north.

How can I get to Mt Taygetos on Ayios Ilias to see the shadow on the plain of Sparta? Sosana
More
x