Encyclopedia
The Morea was the name of the Peloponnese
Peloponnese
The Peloponnese, Peloponnesos or Peloponnesus , is a large peninsula , located in a region of southern Greece, forming the part of the country south of the Gulf of Corinth...
peninsula in southern Greece
Greece
Greece , officially the Hellenic Republic , and historically Hellas or the Republic of Greece in English, is a country in southeastern Europe....
during the Middle Ages
Middle Ages
The Middle Ages is a periodization of European history from the 5th century to the 15th century. The Middle Ages follows the fall of the Western Roman Empire in 476 and precedes the Early Modern Era. It is the middle period of a three-period division of Western history: Classic, Medieval and Modern...
and the early modern period. It also referred to a Byzantine province in the region, known as the Despotate of Morea
Despotate of Morea
The Despotate of the Morea or Despotate of Mystras was a province of the Byzantine Empire which existed between the mid-14th and mid-15th centuries. Its territory varied in size during its 100 years of existence but eventually grew to take in almost all the southern Greek peninsula, the...
.


Origins of the name

There is some uncertainty over the origin of the medieval name "Morea", which is first recorded only in the 10th century in the Byzantine
Byzantine Empire
The Byzantine Empire was the Eastern Roman Empire during the periods of Late Antiquity and the Middle Ages, centred on the capital of Constantinople. Known simply as the Roman Empire or Romania to its inhabitants and neighbours, the Empire was the direct continuation of the Ancient Roman State...
chronicles.

Traditionally scholars thought the name originated from the word morea (μορέα), meaning morus or mulberry, a tree which, though known in the region from the ancient times, gained value after the 6th century, when silkworms were smuggled from China to Byzantium. Then the mulberry began to be planted so copiously in the Peloponnesus that the plain around Thebes
Thebes, Greece
Thebes is a city in Greece, situated to the north of the Cithaeron range, which divides Boeotia from Attica, and on the southern edge of the Boeotian plain. It played an important role in Greek myth, as the site of the stories of Cadmus, Oedipus, Dionysus and others...
came to be known as Morokampos and Thebes gained renown for its silk. No silk is now made at Thebes and mulberry trees are not prominent, but the Theban plain retains its name Morokampos from the mulberry trees which once gave the town its prosperity.

The British Byzantinist Steven Runciman
Steven Runciman
The Hon. Sir James Cochran Stevenson Runciman CH — known as Steven Runciman — was a British historian known for his work on the Middle Ages...
suggested that the name comes "from the likeness of its shape to that of a mulberry leaf."

Jakob Philipp Fallmerayer
Jakob Philipp Fallmerayer
Jakob Philipp Fallmerayer was a Tyrolean traveller, journalist, politician and historian, best known for his controversial theories concerning the racial origins of the Greeks, and for his travel writings.-Education:Fallmerayer was born, the seventh of ten children, in Weiler Pairdorf, a village...
's alternate proposal that the name comes from the Slavic word
Slavic languages
The Slavic languages , a group of closely related languages of the Slavic peoples and a subgroup of Indo-European languages, have speakers in most of Eastern Europe, in much of the Balkans, in parts of Central Europe, and in the northern part of Asia.-Branches:Scholars traditionally divide Slavic...
more, meaning "sea"as for a long periods the region was inhabited by slavs and thracians. 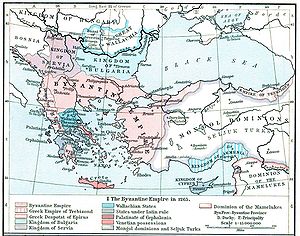 After the conquest of Constantinople by the forces of the Fourth Crusade
Fourth Crusade
The Fourth Crusade was originally intended to conquer Muslim-controlled Jerusalem by means of an invasion through Egypt. Instead, in April 1204, the Crusaders of Western Europe invaded and conquered the Christian city of Constantinople, capital of the Eastern Roman Empire...
(1204), two groups of Franks
Franks
The Franks were a confederation of Germanic tribes first attested in the third century AD as living north and east of the Lower Rhine River. From the third to fifth centuries some Franks raided Roman territory while other Franks joined the Roman troops in Gaul. Only the Salian Franks formed a...
undertook the occupation of the Morea. They created the Principality of Achaea
Principality of Achaea
The Principality of Achaea or of the Morea was one of the three vassal states of the Latin Empire which replaced the Byzantine Empire after the capture of Constantinople during the Fourth Crusade. It became a vassal of the Kingdom of Thessalonica, along with the Duchy of Athens, until Thessalonica...
, a largely Greek-inhabited statelet ruled by a Latin (Western) autocrat. In referring to the Peloponnese, they followed local practice and used the name "Morea".

The most important prince in the Morea was Guillaume II de Villehardouin (1246–1278), who fortified Mistra (Mystras) near the site of Sparta
Sparta
Sparta or Lacedaemon, was a prominent city-state in ancient Greece, situated on the banks of the River Eurotas in Laconia, in south-eastern Peloponnese. It emerged as a political entity around the 10th century BC, when the invading Dorians subjugated the local, non-Dorian population. From c...
in 1249. After losing the Battle of Pelagonia
Battle of Pelagonia
The Battle of Pelagonia took place in September of 1259, between the Empire of Nicaea and the Despotate of Epirus, Sicily and the Principality of Achaea...
(1259) against the Byzantine Emperor Michael VIII Palaeologus, Guillaume was forced to ransom himself by giving up most of the eastern part of Morea and his newly built strongholds. An initial Byzantine drive to reconquer the entire peninsula failed in the battles of Prinitza
Battle of Prinitza
The Battle of Prinitza was fought in 1263 between the forces of the Byzantine Empire, marching to capture Andravida, the capital of the Latin Principality of Achaea, and a small Achaean force...
and Makryplagi
Battle of Makryplagi
The Battle of Makryplagi or Makry Plagi was fought between the forces of the Byzantine Empire, and the Latin Principality of Achaea. The Byzantines had been weakened and demoralized by the defection of their numerous Turkish mercenaries to the Achaeans...
, and the Byzantines and Franks settled to an uneasy coexistence.

In the mid-14th century, the later Byzantine Emperor John VI Kantakouzenos
John VI Kantakouzenos
John VI Kantakouzenos or Cantacuzenus was the Byzantine emperor from 1347 to 1354.-Early life:Born in Constantinople, John Kantakouzenos was the son of a Michael Kantakouzenos, governor of the Morea. Through his mother Theodora Palaiologina Angelina, he was a descendant of the reigning house of...
reorganized Morea into the Despotate of the Morea. Sons of the emperor with the rank of despotes
Despotes
Despot , was a senior Byzantine court title that was bestowed on the sons or sons-in-law of reigning emperors, and initially denoted the heir-apparent...
were usually sent to rule the province as an appanage
Appanage
An apanage or appanage or is the grant of an estate, titles, offices, or other things of value to the younger male children of a sovereign, who would otherwise have no inheritance under the system of primogeniture...
. By 1430, the Byzantines eventually recovered the remainder of the Frankish part of the Morea, but in 1460 the peninsula was overrun and conquered by the Ottoman Empire
Ottoman Empire
The Ottoman EmpireIt was usually referred to as the "Ottoman Empire", the "Turkish Empire", the "Ottoman Caliphate" or more commonly "Turkey" by its contemporaries...
.

The peninsula was captured for the Republic of Venice
Republic of Venice
The Republic of Venice or Venetian Republic was a state originating from the city of Venice in Northeastern Italy. It existed for over a millennium, from the late 7th century until 1797. It was formally known as the Most Serene Republic of Venice and is often referred to as La Serenissima, in...
by Francesco Morosini
Francesco Morosini
Francesco Morosini was the Doge of Venice from 1688 to 1694, at the height of the Great Turkish War...
during the Morean War
Morean War
The Morean War is the better known name for the Sixth Ottoman–Venetian War. The war was fought between 1684–1699, as part of the wider conflict known as the "Great Turkish War", between the Republic of Venice and the Ottoman Empire...
of 1684–99. Venetian rule proved unpopular, and the Ottomans recaptured the Morea in a lightning campaign in 1714. Under renewed Ottoman rule, centered at Tripolitsa
Tripoli, Greece
Tripoli is a city of about 25,000 inhabitants in the central part of the Peloponnese, in Greece. It is the capital of the prefecture of Arcadia and the centre of the municipality of Tripolis, pop...
, the region enjoyed relative prosperity. The latter 18th century was marked by renewed dissatisfaction. Armed bands of the klephts emerged, undeterred by the brutal repression of the Orlov Revolt
Orlov Revolt
The Orlov Revolt was a precursor to the Greek War of Independence , which saw a Greek uprising in the Peloponnese at the instigation of Count Orlov, commander of the Russian Naval Forces of the Russo-Turkish War...
. They waged guerrilla war against the Turks, aided both by the decay of Ottoman power and the re-emergence of Greek national consciousness. Ultimately, the Morea and its inhabitants provided the cradle and backbone of the Greek Revolution.


Chronicle of the Morea

The anonymous 14th century Chronicle of the Morea relates events of the Franks
Franks
The Franks were a confederation of Germanic tribes first attested in the third century AD as living north and east of the Lower Rhine River. From the third to fifth centuries some Franks raided Roman territory while other Franks joined the Roman troops in Gaul. Only the Salian Franks formed a...
' establishment of feudalism
Feudalism
Feudalism was a set of legal and military customs in medieval Europe that flourished between the 9th and 15th centuries, which, broadly defined, was a system for ordering society around relationships derived from the holding of land in exchange for service or labour.Although derived from the...
in mainland Greece following the Fourth Crusade. Despite its unreliability about historical events, the Chronicle is famous for its lively portrayal of life in the feudal community. The language in Greek versions is notable as it reflects the rapid transition from Medieval to Modern Greek. The original language of the Chronicle is disputed, but recent scholarship prefers the Greek version in MS Havniensis 57 (14th–15th century, in Copenhagen
Copenhagen
Copenhagen is the capital and largest city of Denmark, with an urban population of 1,199,224 and a metropolitan population of 1,930,260 . With the completion of the transnational Øresund Bridge in 2000, Copenhagen has become the centre of the increasingly integrating Øresund Region...
). Other manuscripts include the Ms Parisinus graecus 2898 (15th–16th century, at the Bibliothèque nationale de France
Bibliothèque nationale de France
The is the National Library of France, located in Paris. It is intended to be the repository of all that is published in France. The current president of the library is Bruno Racine.-History:...
, Paris
Paris
Paris is the capital and largest city in France, situated on the river Seine, in northern France, at the heart of the Île-de-France region...
). The difference of about one century in the texts shows a considerable number of linguistic differences due to the rapid evolution of the Greek language.