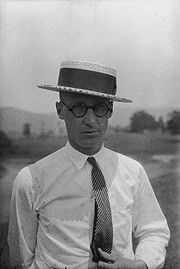 John Thomas Scopes was a biology teacher
Teacher
A teacher or schoolteacher is a person who provides education for pupils and students . The role of teacher is often formal and ongoing, carried out at a school or other place of formal education. In many countries, a person who wishes to become a teacher must first obtain specified professional...
in Dayton, Tennessee
Dayton, Tennessee
Dayton is a city in Rhea County, Tennessee, United States. The population was 6,180 at the 2000 census. The Dayton, TN, Urban Cluster, which includes developed areas adjacent to the city and extends south to Graysville, Tennessee, had 9,050 people in 2000...
, who was charged on May 5, 1925 for violating Tennessee
Tennessee
Tennessee is a U.S. state located in the Southeastern United States. It has a population of 6,346,105, making it the nation's 17th-largest state by population, and covers , making it the 36th-largest by total land area...
's Butler Act
Butler Act
The Butler Act was a 1925 Tennessee law prohibiting public school teachers from denying the Biblical account of man’s origin. It was enacted as Tennessee Code Annotated Title 49 Section 1922...
, which prohibited the teaching of evolution
Evolution
Evolution is any change across successive generations in the heritable characteristics of biological populations. Evolutionary processes give rise to diversity at every level of biological organisation, including species, individual organisms and molecules such as DNA and proteins.Life on Earth...
in Tennessee schools. He was tried in a case known as the Scopes Trial
Scopes Trial
The Scopes Trial—formally known as The State of Tennessee v. John Thomas Scopes and informally known as the Scopes Monkey Trial—was a landmark American legal case in 1925 in which high school science teacher, John Scopes, was accused of violating Tennessee's Butler Act which made it unlawful to...
.

Scopes was born and raised in Paducah, Kentucky
Paducah, Kentucky
Paducah is the largest city in Kentucky's Jackson Purchase Region and the county seat of McCracken County, Kentucky, United States. It is located at the confluence of the Tennessee River and the Ohio River, halfway between the metropolitan areas of St. Louis, Missouri, to the west and Nashville,...
before moving to Illinois as a teenager. He was a member of the class of 1919 in Salem, Illinois
Salem, Illinois
Salem is a city located in the U.S. state of Illinois. It is the county seat of Marion County. The population was 7,485 at the 2010 census.Salem is the birthplace of William Jennings Bryan and his brother vice presidential candidate Charles W. Bryan, the G. I. Bill of Rights, and Miracle Whip salad...
, which was also William Jennings Bryan
William Jennings Bryan
William Jennings Bryan was an American politician in the late-19th and early-20th centuries. He was a dominant force in the liberal wing of the Democratic Party, standing three times as its candidate for President of the United States...
's home town. After he had earned a law degree at the University of Kentucky
University of Kentucky
The University of Kentucky, also known as UK, is a public co-educational university and is one of the state's two land-grant universities, located in Lexington, Kentucky...
in 1924, Scopes moved to Dayton where he took a job as the Rhea County High School
High school
High school is a term used in parts of the English speaking world to describe institutions which provide all or part of secondary education. The term is often incorporated into the name of such institutions....
's football
American football
American football is a sport played between two teams of eleven with the objective of scoring points by advancing the ball into the opposing team's end zone. Known in the United States simply as football, it may also be referred to informally as gridiron football. The ball can be advanced by...
coach, and worked every wednesday and friday as a substitute teacher when regular members of staff were off work.

A band of businessmen in Dayton, Tennessee, led by engineer and geologist George Rappleyea
George Rappleyea
George Washington Rappleyea , a New Yorker, was a metallurgical engineer and the manager of the Cumberland Coal and Iron Company in Dayton, Tennessee. He held this position in the summer of 1925 when he became the chief architect of the Scopes Trial...
, saw this as an opportunity to get publicity for their town and approached Scopes. Rappleyea pointed out that while the Butler Act
Butler Act
The Butler Act was a 1925 Tennessee law prohibiting public school teachers from denying the Biblical account of man’s origin. It was enacted as Tennessee Code Annotated Title 49 Section 1922...
prohibited the teaching of human evolution, the state required teachers to use the assigned textbook, Hunter's Civic Biology
Civic Biology
A Civic Biology: Presented in Problems was a biology textbook written by George William Hunter, published in 1914. It is the book which the state of Tennessee required high school teachers to use in 1925 and is best known for its section about evolution that was ruled by a local court to be in...
(1914), which included a chapter on evolution. Rappleyea argued that teachers were essentially required to break the law. When asked about the test case, Scopes was initially reluctant to get involved, but after some discussion he told the group gathered in Robinson's Drugstore, "If you can prove that I've taught evolution and that I can qualify as a defendant, then I'll be willing to stand trial."

By the time the trial had begun, the defense
Defense (legal)
In civil proceedings and criminal prosecutions under the common law, a defendant may raise a defense in an attempt to avoid criminal or civil liability...
team included Clarence Darrow
Clarence Darrow
Clarence Seward Darrow was an American lawyer and leading member of the American Civil Liberties Union, best known for defending teenage thrill killers Leopold and Loeb in their trial for murdering 14-year-old Robert "Bobby" Franks and defending John T...
, Dudley Field Malone
Dudley Field Malone
Dudley Field Malone was an attorney, politician, liberal activist and actor.-Biography:The son of Tammany Democratic official William C...
, John Neal
John Randolph Neal, Jr.
John Randolph Neal, Jr. was an American attorney, law professor, politician, and activist, best known for his role as chief counsel during the 1925 Scopes Trial, and as an advocate for the establishment of the Tennessee Valley Authority in the 1920s and 1930s...
, Arthur Garfield Hays
Arthur Garfield Hays
Arthur Garfield Hays was a lawyer born in Rochester, New York. His father and mother, both of German descent, belonged to prospering families in the clothing manufacturing industry...
and Frank McElwee. The prosecution team, led by Tom Stewart
Tom Stewart
Arthur Thomas Stewart , more commonly known as Tom Stewart, was a Democratic United States Senator from Tennessee from 1939 to 1949.-Early life and education:...
, included brothers Herbert Hicks and Sue K. Hicks
Sue K. Hicks
Sue Kerr Hicks was an American jurist who practiced law and served as a circuit court judge in the state of Tennessee. He is best known for his role as a co-instigator and prosecutor in the 1925 trial of John T. Scopes, a Dayton, Tennessee teacher accused of teaching the Theory of Evolution in...
, Wallace Haggard, father and son pairings Ben and J. Gordon McKenzie and William Jennings Bryan
William Jennings Bryan
William Jennings Bryan was an American politician in the late-19th and early-20th centuries. He was a dominant force in the liberal wing of the Democratic Party, standing three times as its candidate for President of the United States...
and William Jennings Bryan Jr. Bryan had spoken at Scopes' high school commencement and remembered the defendant laughing while he was giving the address to the graduating class six years earlier.

The case ended on July 21, 1925, with a guilt
Guilt
Guilt is the state of being responsible for the commission of an offense. It is also a cognitive or an emotional experience that occurs when a person realizes or believes—accurately or not—that he or she has violated a moral standard, and bears significant responsibility for that...
y verdict
Verdict
In law, a verdict is the formal finding of fact made by a jury on matters or questions submitted to the jury by a judge. The term, from the Latin veredictum, literally means "to say the truth" and is derived from Middle English verdit, from Anglo-Norman: a compound of ver and dit In law, a verdict...
, and Scopes was fined $100. The case was appealed to the Tennessee Supreme Court
Tennessee Supreme Court
The Tennessee Supreme Court is the state supreme court of the state of Tennessee. Cornelia Clark is the current Chief Justice.Unlike other states, in which the state attorney general is directly elected or appointed by the governor or state legislature, the Tennessee Supreme Court appoints the...
. In a 3-1 decision written by Chief Justice Grafton Green
Grafton Green
Grafton Green was an American jurist who served on the Tennessee Supreme Court from 1910 to 1947, including more than 23 years as chief justice....
the Butler Act was held to be constitutional, but overturned Scopes' conviction on a technicality
Legal technicality
The term legal technicality is a casual or colloquial phrase referring to a technical aspect of law. The phrase is not a term of art in the law; it has no exact meaning, nor does it have a legal definition. It implies that that strict adherence to the letter of the law has prevented the spirit of...
: the judge had set the fine instead of the jury. The Butler Act remained until 1967 when it was repealed by the Tennessee legislature.

Scopes may have actually been innocent of the crime to which his name is inexorably linked. After the trial Scopes admitted to reporter William Kinsey Hutchinson
William Kinsey Hutchinson
William Kinsey "Bill" Hutchinson was an American reporter who became a friend of presidents, legislators, cabinet members, and other U.S. government diplomats and officials. Between 1913 and 1920 William worked as a reporter for a Reading, Pennsylvania newspaper. He moved to Washington, D.C...
"I didn't violate the law," (DeCamp p. 435) explaining that he had skipped the evolution lesson and his lawyers had coached his students to go on the stand; the Dayton businessmen had assumed he had violated the law. Hutchinson did not file his story until after the Scopes appeal was decided in 1927. Scopes also admitted the truth to the wife of the Universalist minister Charles Francis Potter.

After the trial, Scopes accepted a scholarship for graduate study in geology at the University of Chicago. He then did geological field work in Venezuela
Venezuela
Venezuela , officially called the Bolivarian Republic of Venezuela , is a tropical country on the northern coast of South America. It borders Colombia to the west, Guyana to the east, and Brazil to the south...
for Gulf Oil of South America. There he met and married his wife, Mildred, and was baptized in the Roman Catholic Church. In 1930, he returned to the University of Chicago for a third year of graduate study. After two years without professional employment, he took a position as a geologist with the United Gas Company, for which he studied oil reserves. He worked, first in Houston, Texas
Houston, Texas
Houston is the fourth-largest city in the United States, and the largest city in the state of Texas. According to the 2010 U.S. Census, the city had a population of 2.1 million people within an area of . Houston is the seat of Harris County and the economic center of , which is the ...
and then in Shreveport, Louisiana
Shreveport, Louisiana
Shreveport is the third largest city in Louisiana. It is the principal city of the fourth largest metropolitan area in the state of Louisiana and is the 109th-largest city in the United States....
, until he retired in 1963.