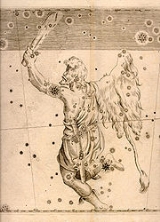 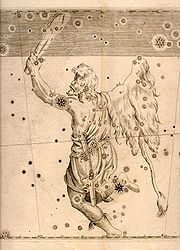 Johann Bayer was a German
Germany
Germany , officially the Federal Republic of Germany , is a federal parliamentary republic in Europe. The country consists of 16 states while the capital and largest city is Berlin. Germany covers an area of 357,021 km2 and has a largely temperate seasonal climate...
lawyer
Lawyer
A lawyer, according to Black's Law Dictionary, is "a person learned in the law; as an attorney, counsel or solicitor; a person who is practicing law." Law is the system of rules of conduct established by the sovereign government of a society to correct wrongs, maintain the stability of political...
and uranograph
Star cartography
Celestial cartography, uranography or star cartography, is the fringe of astronomy and branch of cartography concerned with mapping stars, galaxies, and other astronomical objects on the celestial sphere...
er (celestial cartographer). He was born in Rain, Bavaria
Bavaria
Bavaria, formally the Free State of Bavaria is a state of Germany, located in the southeast of Germany. With an area of , it is the largest state by area, forming almost 20% of the total land area of Germany...
, in 1572. He began his study of philosophy in Ingolstadt
Ingolstadt
Ingolstadt is a city in the Free State of Bavaria, in the Federal Republic of Germany. It is located along the banks of the Danube River, in the center of Bavaria. As at 31 March 2011, Ingolstadt had 125.407 residents...
in 1592, and moved later to Augsburg
Augsburg
Augsburg is a city in the south-west of Bavaria, Germany. It is a university town and home of the Regierungsbezirk Schwaben and the Bezirk Schwaben. Augsburg is an urban district and home to the institutions of the Landkreis Augsburg. It is, as of 2008, the third-largest city in Bavaria with a...
to begin work as a lawyer. He grew interested in astronomy during his time in Augsburg. He ultimately became legal advisor to the Augsburg city council in 1612 and died in 1625.

He is most famous for his star atlas Uranometria
Uranometria
Uranometria is the short title of a star atlas produced by Johann Bayer.It was published in Augsburg, Germany, in 1603 by Christophorus Mangus under the full title Uranometria : omnium asterismorum continens schemata, nova methodo delineata, aereis laminis expressa. This translates to...
, published in 1603, which was the first atlas to cover the entire celestial sphere
Celestial sphere
In astronomy and navigation, the celestial sphere is an imaginary sphere of arbitrarily large radius, concentric with the Earth and rotating upon the same axis. All objects in the sky can be thought of as projected upon the celestial sphere. Projected upward from Earth's equator and poles are the...
. It introduced a new system of star designation which has become known as the Bayer designation
Bayer designation
A Bayer designation is a stellar designation in which a specific star is identified by a Greek letter, followed by the genitive form of its parent constellation's Latin name...
. It introduced 12 new constellations to fill in the far south of the sky, which was unknown to ancient Greece and Rome.

The crater Bayer
Bayer (crater)
Bayer is a lunar impact crater located in the southwest section of the moon, to the east of the crater Schiller. The rim of Bayer is slightly worn by erosion, but remains well-defined. There is an inner terrace, but the outer wall is intruded upon by nearby impacts. The most significant of these is...
on the Moon
Moon
The Moon is Earth's only known natural satellite,There are a number of near-Earth asteroids including 3753 Cruithne that are co-orbital with Earth: their orbits bring them close to Earth for periods of time but then alter in the long term . These are quasi-satellites and not true moons. For more...
is named after him.