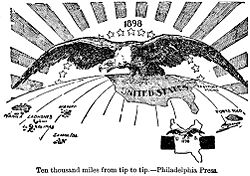 Jingoism is defined in the Oxford English Dictionary
Oxford English Dictionary
The Oxford English Dictionary , published by the Oxford University Press, is the self-styled premier dictionary of the English language. Two fully bound print editions of the OED have been published under its current name, in 1928 and 1989. The first edition was published in twelve volumes , and...
as extreme patriotism
Patriotism
Patriotism is a devotion to one's country, excluding differences caused by the dependencies of the term's meaning upon context, geography and philosophy...
in the form of aggressive foreign policy. In practice, it is a country's advocation of the use of threats or actual force against other countries in order to safeguard what it perceives as its national interests. Colloquially, it refers to excessive bias
Bias
Bias is an inclination to present or hold a partial perspective at the expense of alternatives. Bias can come in many forms.-In judgement and decision making:...
in judging one's own country as superior to others – an extreme type of nationalism
Nationalism
Nationalism is a political ideology that involves a strong identification of a group of individuals with a political entity defined in national terms, i.e. a nation. In the 'modernist' image of the nation, it is nationalism that creates national identity. There are various definitions for what...
.

The term originated in Britain
United Kingdom
The United Kingdom of Great Britain and Northern IrelandIn the United Kingdom and Dependencies, other languages have been officially recognised as legitimate autochthonous languages under the European Charter for Regional or Minority Languages...
, expressing a pugnacious attitude towards Russia
Russia
Russia or , officially known as both Russia and the Russian Federation , is a country in northern Eurasia. It is a federal semi-presidential republic, comprising 83 federal subjects...
in the 1870s. During the 19th century in the United States
United States
The United States of America is a federal constitutional republic comprising fifty states and a federal district...
, journalists called this attitude spread-eagleism. "Jingoism" did not enter the American vernacular
Vernacular
A vernacular is the native language or native dialect of a specific population, as opposed to a language of wider communication that is not native to the population, such as a national language or lingua franca.- Etymology :The term is not a recent one...
until near the end of the 19th century. This nationalistic belligerence was intensified by the sinking of the battleship
Battleship
A battleship is a large armored warship with a main battery consisting of heavy caliber guns. Battleships were larger, better armed and armored than cruisers and destroyers. As the largest armed ships in a fleet, battleships were used to attain command of the sea and represented the apex of a...
USS Maine
USS Maine (ACR-1)
USS Maine was the United States Navy's second commissioned pre-dreadnought battleship, although she was originally classified as an armored cruiser. She is best known for her catastrophic loss in Havana harbor. Maine had been sent to Havana, Cuba to protect U.S. interests during the Cuban revolt...
in Havana
Havana
Havana is the capital city, province, major port, and leading commercial centre of Cuba. The city proper has a population of 2.1 million inhabitants, and it spans a total of — making it the largest city in the Caribbean region, and the most populous...
harbour that led to the Spanish-American War
Spanish-American War
The Spanish–American War was a conflict in 1898 between Spain and the United States, effectively the result of American intervention in the ongoing Cuban War of Independence...
of 1898.

The chorus of a song by G. H. MacDermott
G. H. MacDermott
Gilbert Hastings MacDermott was one of the biggest stars of the Victorian English music hall. He performed under the name of The Great MacDermott, and was well known for his rousing rendition of a war song he was persuaded to buy from G. W. Hunt for one guinea...
(singer) and G. W. Hunt (songwriter) commonly sung in British pubs
Public house
A public house, informally known as a pub, is a drinking establishment fundamental to the culture of Britain, Ireland, Australia and New Zealand. There are approximately 53,500 public houses in the United Kingdom. This number has been declining every year, so that nearly half of the smaller...
and music hall
Music hall
Music Hall is a type of British theatrical entertainment which was popular between 1850 and 1960. The term can refer to:# A particular form of variety entertainment involving a mixture of popular song, comedy and speciality acts...
s around the time of the Russo-Turkish War gave birth to the term. The lyrics had the chorus:
The phrase "by Jingo
By Jingo
The expression "by Jingo" is apparently a minced oath that appeared rarely in print, but which may be traced as far back as to at least the 17th century in a transparent euphemism for "by Jesus"...
" was a long-established minced oath
Minced oath
A minced oath is an expression based on a profanity or a taboo term that has been altered to reduce the objectionable characteristics.Many languages have such expressions...
, used to avoid saying "by Jesus". Referring to the song, the specific term "jingoism" was coined as a political label by the prominent British radical George Holyoake
George Holyoake
George Jacob Holyoake , English secularist and co-operator, was born in Birmingham, England. He coined the term "secularism" in 1851 and the term "jingoism" in 1878.-Owenism:...
in a letter to the Daily News
News Chronicle
The News Chronicle was a British daily newspaper. It ceased publication on 17 October 1960, being absorbed into the Daily Mail. Its offices were in Bouverie Street, off Fleet Street, London, EC4Y 8DP, England.-Daily Chronicle:...
on 13 March 1878. The term eventually caught on in the United States.

Early uses of the term in the United States were connected to the foreign policy of Theodore Roosevelt
Theodore Roosevelt
Theodore "Teddy" Roosevelt was the 26th President of the United States . He is noted for his exuberant personality, range of interests and achievements, and his leadership of the Progressive Movement, as well as his "cowboy" persona and robust masculinity...
, who was frequently accused of jingoism. In an 8 October 1895 New York Times interview, he responded, "There is much talk about 'jingoism'. If by 'jingoism' they mean a policy in pursuance of which Americans will with resolution and common sense insist upon our rights being respected by foreign powers, then we are 'jingoes'."

The policy of appeasement
Appeasement
The term appeasement is commonly understood to refer to a diplomatic policy aimed at avoiding war by making concessions to another power. Historian Paul Kennedy defines it as "the policy of settling international quarrels by admitting and satisfying grievances through rational negotiation and...
towards Hitler led to satirical references to the loss of jingoistic attitudes in Britain. In the 28 March 1938 issue of Punch
Punch (magazine)
Punch, or the London Charivari was a British weekly magazine of humour and satire established in 1841 by Henry Mayhew and engraver Ebenezer Landells. Historically, it was most influential in the 1840s and 50s, when it helped to coin the term "cartoon" in its modern sense as a humorous illustration...
appeared a E. H. Shepard
E. H. Shepard
Ernest Howard Shepard was an English artist and book illustrator. He was known especially for his human-like animals in illustrations for The Wind in the Willows by Kenneth Grahame and Winnie-the-Pooh by A. A. Milne....
cartoon entitled The Old-Fashioned Customer. Set in a record shop, John Bull
John Bull
John Bull is a national personification of Britain in general and England in particular, especially in political cartoons and similar graphic works. He is usually depicted as a stout, middle-aged man, often wearing a Union Flag waistcoat.-Origin:...
asks the record seller (Prime Minister Neville Chamberlain
Neville Chamberlain
Arthur Neville Chamberlain FRS was a British Conservative politician who served as Prime Minister of the United Kingdom from May 1937 to May 1940. Chamberlain is best known for his appeasement foreign policy, and in particular for his signing of the Munich Agreement in 1938, conceding the...
): "I wonder if you've got a song I remember about not wanting to fight, but if we do . . . something, something, something . . . we've got the money too?". On the wall is a portrait of the Victorian Prime Minister Lord Salisbury
Robert Gascoyne-Cecil, 3rd Marquess of Salisbury
Robert Arthur Talbot Gascoyne-Cecil, 3rd Marquess of Salisbury, KG, GCVO, PC , styled Lord Robert Cecil before 1865 and Viscount Cranborne from June 1865 until April 1868, was a British Conservative statesman and thrice Prime Minister, serving for a total of over 13 years...
.