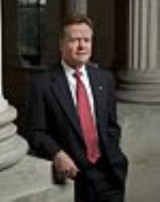 A 1968 graduate of the U.S. Naval Academy
United States Naval Academy
The United States Naval Academy is a four-year coeducational federal service academy located in Annapolis, Maryland, United States...
, Webb served as a Marine Corps
United States Marine Corps
The United States Marine Corps is a branch of the United States Armed Forces responsible for providing power projection from the sea, using the mobility of the United States Navy to deliver combined-arms task forces rapidly. It is one of seven uniformed services of the United States...
infantry
Infantry
Infantrymen are soldiers who are specifically trained for the role of fighting on foot to engage the enemy face to face and have historically borne the brunt of the casualties of combat in wars. As the oldest branch of combat arms, they are the backbone of armies...
officer until 1972, and is a highly decorated Vietnam War
Vietnam War
The Vietnam War was a Cold War-era military conflict that occurred in Vietnam, Laos, and Cambodia from 1 November 1955 to the fall of Saigon on 30 April 1975. This war followed the First Indochina War and was fought between North Vietnam, supported by its communist allies, and the government of...
combat veteran. During his four years with the Reagan administration
Reagan Administration
The United States presidency of Ronald Reagan, also known as the Reagan administration, was a Republican administration headed by Ronald Reagan from January 20, 1981, to January 20, 1989....
, Webb served as the first Assistant Secretary of Defense for Reserve Affairs, then as Secretary of the Navy.

Webb won the Democratic nomination for the 2006 Virginia Senate race by defeating Harris Miller
Harris Miller
Harris N. Miller is an American politician, businessman, and lobbyist. He is currently president of the Career Colleges Association, the umbrella government relations group for 1,400 for-profit vocational schools in the United States. He was formerly the president of the Information Technology...
in the primary
Primary election
A primary election is an election in which party members or voters select candidates for a subsequent election. Primary elections are one means by which a political party nominates candidates for the next general election....
, then won the general election by defeating the Republican
Republican Party (United States)
The Republican Party is one of the two major contemporary political parties in the United States, along with the Democratic Party. Founded by anti-slavery expansion activists in 1854, it is often called the GOP . The party's platform generally reflects American conservatism in the U.S...
incumbent George Allen
George Allen (U.S. politician)
George Felix Allen is a former United States Senator from the Commonwealth of Virginia, and the son of former NFL head coach George Allen. Allen served Virginia in the state legislature, as the 67th Governor, and in both bodies of the U.S. Congress, winning election to the Senate in 2000...
.

Friends are found on the battlefield, and unfortunately friends are also lost. And where do we find the measure of that sacrifice? How can we account for the value of that loss? Sometimes we can find an answer in our sense of country, at other times in our Corps. But clearly we can see it in the lives that were able to continue due to the acts of others who were not so fortunate.

Our country is in the middle of a profound crisis. This crisis has many causes, but much of it has been brought about by poor leadership decisions at every level of government. In addition, our electoral process is dominated by financial interests that are threatened by the very notion of reform.