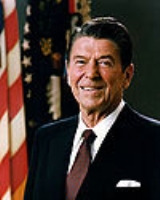 Domestically, the administration favored reducing government programs and introduced the largest across-the-board tax cuts in American history. The economic policies enacted in 1981, known as "Reaganomics
Reaganomics
Reaganomics refers to the economic policies promoted by the U.S. President Ronald Reagan during the 1980s, also known as supply-side economics and called trickle-down economics, particularly by critics...
," were an example of supply-side economics
Economics
Economics is the social science that analyzes the production, distribution, and consumption of goods and services. The term economics comes from the Ancient Greek from + , hence "rules of the house"...
.

Were any changes made in the administration of the National Traffic & Motor Vehicle Safety Act (passed 1966) during the Reagan administration? Speci...
More
x