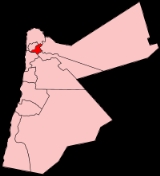 Encyclopedia
Jerash is one of the governorates of Jordan
Jordan
Jordan , officially the Hashemite Kingdom of Jordan , Al-Mamlaka al-Urduniyya al-Hashemiyya) is a kingdom on the East Bank of the River Jordan. The country borders Saudi Arabia to the east and south-east, Iraq to the north-east, Syria to the north and the West Bank and Israel to the west, sharing...
; it is located north of Amman
Amman
Amman is the capital of Jordan. It is the country's political, cultural and commercial centre and one of the oldest continuously inhabited cities in the world. The Greater Amman area has a population of 2,842,629 as of 2010. The population of Amman is expected to jump from 2.8 million to almost...
, Jordan's capital. It carrys the name of its capital and largest city, Jerash
Jerash
Jerash, the Gerasa of Antiquity, is the capital and largest city of Jerash Governorate , which is situated in the north of Jordan, north of the capital Amman towards Syria...
City.

Jerash is a hilly region with fertile lands, the province is bordered by Irbid Governorate
Irbid Governorate
Irbid or Irbed is one of the governorates of Jordan. It is located north of Amman, Jordan's capital. The capital of the governorate of Irbid is the city of Irbid...
to the north, Ajlun Governorate to the west, Mafraq Governorate
Mafraq Governorate
Mafraq is one of the governorates of Jordan, located to the north-east of Amman, capital of Jordan. It has a population of 254,219 with a percentage of 4.5% of Jordan's population...
and Zarqa Governorate
Zarqa Governorate
Zarqa Governorate is the third largest governorate in Jordan by population. The capital of Zarqa governorate is Zarqa City, which is the largest city in the governorate. It is located 25 km east of the Jordanian capital Amman...
to the east, and Balqa Governorate from the south. The Average yearly rainfall in Jerash governorate is in the range of 400–500 mm considered among the highest in the Country. The elevation range of the province is 300 to 1300 m above sea level with fresh water streams and the Zarqa River
Zarqa River
The Zarqa River is the second largest tributary of the lower Jordan River, after the Yarmouk River. It is the third largest river in the region by annual discharge, and its watershed encompasses the most densely populated areas east of the Jordan River...
flowing through it, surrounderd by fertile plains, hills and mountains with a mild mediterranean climate, flora
Flora
Flora is the plant life occurring in a particular region or time, generally the naturally occurring or indigenous—native plant life. The corresponding term for animals is fauna.-Etymology:...
and fauna
Fauna
Fauna or faunæ is all of the animal life of any particular region or time. The corresponding term for plants is flora.Zoologists and paleontologists use fauna to refer to a typical collection of animals found in a specific time or place, e.g. the "Sonoran Desert fauna" or the "Burgess shale fauna"...
.

In the first century of the Christian era this insignificant city (then Gerasa) experienced a fast ascent under Roman rule and the Pax Romana
Pax Romana
Pax Romana was the long period of relative peace and minimal expansion by military force experienced by the Roman Empire in the 1st and 2nd centuries AD. Since it was established by Caesar Augustus it is sometimes called Pax Augusta...
. It became part of the Decapolis
Decapolis
The Decapolis was a group of ten cities on the eastern frontier of the Roman Empire in Judea and Syria. The ten cities were not an official league or political unit, but they were grouped together because of their language, culture, location, and political status...
and grew increasingly competitive with the older Petra
Petra
Petra is a historical and archaeological city in the Jordanian governorate of Ma'an that is famous for its rock cut architecture and water conduits system. Established sometime around the 6th century BC as the capital city of the Nabataeans, it is a symbol of Jordan as well as its most visited...
as a commercial town. The inhabitants won ore in the nearby Ajlun mountains. Starting in the middle of the 1st century, this upswing led to active building and a rich abundance of architectural monuments, still impressive today. In the 2nd century, the Roman expansion wars in Asia led to further gains. Well-made roads were built to Pella
Pella, Jordan
Pella is a village and the site of ancient ruins in northwestern Jordan. It is half an hour by car from Irbid, in the north of the country....
, Philadelphia (now Amman), Dion and to the provincial capital Bos(t)ra. Emperor Hadrian
Hadrian
Hadrian , was Roman Emperor from 117 to 138. He is best known for building Hadrian's Wall, which marked the northern limit of Roman Britain. In Rome, he re-built the Pantheon and constructed the Temple of Venus and Roma. In addition to being emperor, Hadrian was a humanist and was philhellene in...
visited the city in the winter of 129
129
Year 129 was a common year starting on Friday of the Julian calendar. At the time, it was known as the Year of the Consulship of Celsus and Marcellus...
-130
130
Year 130 was a common year starting on Saturday of the Julian calendar. At the time, it was known as the Year of the Consulship of Catullinus and Aper...
. In the following centuries the political situation in this region changed fundamentally and the city's means declined. During this time also Christianity was on the ascendant and many churches were built. Gerasa had its own bishop—still today it is a Titularbistum—and bishop Placcus (or Plancus) participated in the Council of Chalcedon
Council of Chalcedon
The Council of Chalcedon was a church council held from 8 October to 1 November, 451 AD, at Chalcedon , on the Asian side of the Bosporus. The council marked a significant turning point in the Christological debates that led to the separation of the church of the Eastern Roman Empire in the 5th...
.
The mathematician Nicomachus of Gerasa came from this city.

Jerash is known for its ample olive groves and fruit
Fruit
In broad terms, a fruit is a structure of a plant that contains its seeds.The term has different meanings dependent on context. In non-technical usage, such as food preparation, fruit normally means the fleshy seed-associated structures of certain plants that are sweet and edible in the raw state,...
orchirds, almost one-forth of the total area of the province is covered with olive groves some dating back to the Roman
Ancient Rome
Ancient Rome was a thriving civilization that grew on the Italian Peninsula as early as the 8th century BC. Located along the Mediterranean Sea and centered on the city of Rome, it expanded to one of the largest empires in the ancient world....
times. Estimates put the number of olive trees in Jerash at 2 million trees. Jerash Governorate has a total annual production of 6500 tonns of olives and 1300 tons of olive oil.

The capital city of the province, Jerash, is at an equidistance from the three largest cities in Jordan, Amman
Amman
Amman is the capital of Jordan. It is the country's political, cultural and commercial centre and one of the oldest continuously inhabited cities in the world. The Greater Amman area has a population of 2,842,629 as of 2010. The population of Amman is expected to jump from 2.8 million to almost...
, Irbid
Irbid
Irbid , known in ancient times as Arabella or Arbela , is the capital and largest city of the Irbid Governorate. It also has the second largest metropolitan population in Jordan after Amman, with a population of around 660,000, and is located about 70 km north of Amman on the northern ridge of...
, and Zarqa
Zarqa
Az-Zarqāʔ is a city in Jordan located to the northeast of Amman. With a population of more than one million 1000,000. It is the country's second largest city after Amman. Zarqa is the capital of Zarqa Governorate . Its name means "the blue one".- Overview :Zarqa is Jordan's industrial centre, home...
(48 km from Amman, 40 km from Irbid, and 50 km from Zarqa), this proximity proved to be difficult for the city to attract investments, as ivestors will tend to invest in one of those cities. 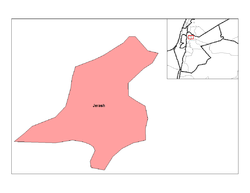 Aside from the city that gives the governorate its name, Jerash Governorate comprises 22 villages, El-Kitté, Souf, Al-Haddadé, Sakeb, Bellila, Kufranjé, El-Hseiniat, Deir Il-Liyat, Al-Mastaba, Nahlé, Il-Kfeir, Bani Irsheid, Raimoun, An-Nabi Houd, Burma, Al-Jazzazah, Jubbah, Mirse', Muqbila, Al-Msheirfeh, Qafqafa and 2 Palestinian
Palestinian people
The Palestinian people, also referred to as Palestinians or Palestinian Arabs , are an Arabic-speaking people with origins in Palestine. Despite various wars and exoduses, roughly one third of the world's Palestinian population continues to reside in the area encompassing the West Bank, the Gaza...
refugee camps, Souf camp and Jerash camp.
The source of this article is wikipedia, the free encyclopedia.  The text of this article is licensed under the GFDL.