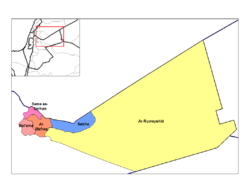 Mafraq is one of the governorates of Jordan
Jordan
Jordan , officially the Hashemite Kingdom of Jordan , Al-Mamlaka al-Urduniyya al-Hashemiyya) is a kingdom on the East Bank of the River Jordan. The country borders Saudi Arabia to the east and south-east, Iraq to the north-east, Syria to the north and the West Bank and Israel to the west, sharing...
, located to the north-east of Amman
Amman
Amman is the capital of Jordan. It is the country's political, cultural and commercial centre and one of the oldest continuously inhabited cities in the world. The Greater Amman area has a population of 2,842,629 as of 2010. The population of Amman is expected to jump from 2.8 million to almost...
, capital of Jordan. It has a population of 254,219 (2000) with a percentage of 4.5% of Jordan's population. Its capital is Mafraq
Mafraq
Mafraq is the capital city of Mafraq Governorate, Jordan, located 80 Km to the north from the Jordanian capital Amman in crossroad to Syria to the north and Iraq to the east. It has 58,954 inhabitants...
, which is known for its military bases.

Mafraq Governorate is divided into four departments according to article 10 of the 46th Administrative Divisions System of the Kingdom of Jordan by the Ministry of Interior which was ratified in the year 2000:

There is one natural gas production field at Al-Reeshah, it is run by the Jordanian National Petroleum Company. In 2008, British Petroleum
BP
BP p.l.c. is a global oil and gas company headquartered in London, United Kingdom. It is the third-largest energy company and fourth-largest company in the world measured by revenues and one of the six oil and gas "supermajors"...
purchased the rights to produce natural gas in the field, and is expected to increase its capacity from 21 cubic foot (0.594653787 m³) to 300 million cubic feet per day in the next five years. The natural gas produced at Al-Reeshah is used entirely for producing electricity at a nearby electricity generating station with a capacity of 120 Megawatts, covering 12% of the total needs of the kingdom for the year 2008.