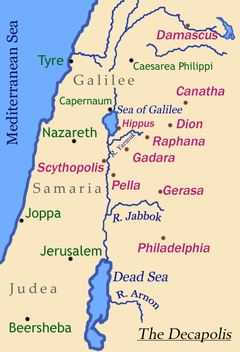 Pella is a village and the site of ancient ruins in northwestern Jordan
Jordan
Jordan , officially the Hashemite Kingdom of Jordan , Al-Mamlaka al-Urduniyya al-Hashemiyya) is a kingdom on the East Bank of the River Jordan. The country borders Saudi Arabia to the east and south-east, Iraq to the north-east, Syria to the north and the West Bank and Israel to the west, sharing...
. It is half an hour by car from Irbid
Irbid
Irbid , known in ancient times as Arabella or Arbela , is the capital and largest city of the Irbid Governorate. It also has the second largest metropolitan population in Jordan after Amman, with a population of around 660,000, and is located about 70 km north of Amman on the northern ridge of...
, in the north of the country.

Pella is located in the Jordan valley some 130 km north of Amman, and the site has been continuously occupied since Neolithic
Neolithic
The Neolithic Age, Era, or Period, or New Stone Age, was a period in the development of human technology, beginning about 9500 BC in some parts of the Middle East, and later in other parts of the world. It is traditionally considered as the last part of the Stone Age...
times. First mentioned in the 19th century BC
19th century BC
-Events:* Hittite empire in Hattusa, Anatolia.* 1900 BC: Proto-Greek invasions of Greece.* c. 1900 BC: Minoan Old Palace period starts in Crete.* c. 1900 BC: Fall of last Sumerian dynasty....
in Egyptian inscriptions, its name was Hellenised
Hellenization
Hellenization is a term used to describe the spread of ancient Greek culture, and, to a lesser extent, language. It is mainly used to describe the spread of Hellenistic civilization during the Hellenistic period following the campaigns of Alexander the Great of Macedon...
to Pella
Pella
Pella , an ancient Greek city located in Pella Prefecture of Macedonia in Greece, was the capital of the ancient kingdom of Macedonia.-Etymology:...
, perhaps to honour Alexander the Great's birthplace. The Roman city, of which some spectacular ruins remain, supplanted the Hellenistic city. During this period Pella was one of the cities making up the Decapolis
Decapolis
The Decapolis was a group of ten cities on the eastern frontier of the Roman Empire in Judea and Syria. The ten cities were not an official league or political unit, but they were grouped together because of their language, culture, location, and political status...
. The city was the site of one of Christianity's earliest churches. According to Eusebius of Caesarea
Eusebius of Caesarea
Eusebius of Caesarea also called Eusebius Pamphili, was a Roman historian, exegete and Christian polemicist. He became the Bishop of Caesarea in Palestine about the year 314. Together with Pamphilus, he was a scholar of the Biblical canon...
it was a refuge for Jerusalem Christians in the 1st century AD
Christianity in the 1st century
The earliest followers of Jesus composed an apocalyptic, Jewish sect, which historians refer to as Jewish Christianity. The Apostles and others following the Great Commission's decree to spread the teachings of Jesus to "all nations," had great success spreading the religion to gentiles. Peter,...
who were fleeing the Jewish–Roman wars.

The city proper was destroyed by the Golan earthquake of 749. A small village remains in the area. Only small portions of the ruins have been excavated.

The University of Sydney
University of Sydney
The University of Sydney is a public university located in Sydney, New South Wales. The main campus spreads across the suburbs of Camperdown and Darlington on the southwestern outskirts of the Sydney CBD. Founded in 1850, it is the oldest university in Australia and Oceania...
and the Jordanian Department of Antiquities have been conducting excavations at Pella since 1979. In recent years, led by Stephen Bourke, the focus has been on the site's Bronze Age
Bronze Age
The Bronze Age is a period characterized by the use of copper and its alloy bronze as the chief hard materials in the manufacture of some implements and weapons. Chronologically, it stands between the Stone Age and Iron Age...
and Iron Age
Iron Age
The Iron Age is the archaeological period generally occurring after the Bronze Age, marked by the prevalent use of iron. The early period of the age is characterized by the widespread use of iron or steel. The adoption of such material coincided with other changes in society, including differing...
temples and administrative buildings. A Canaanite
Canaan
Canaan is a historical region roughly corresponding to modern-day Israel, Palestine, Lebanon, and the western parts of Jordan...
temple was uncovered from 1994 to 2003. In May 2010 Stephen Bourke announced the discovery of a city wall and other structures, dating back to 3400BC, indicating that Pella was a formidable city-state at the same time the cities of Sumer
Sumer
Sumer was a civilization and historical region in southern Mesopotamia, modern Iraq during the Chalcolithic and Early Bronze Age....
were taking shape.

Just below the ancient site is a mosque which commemorates the death of one of the Companions of the Prophet Mohammed, who fell in battle here during the Battle of Fahl
Battle of Fahl
The Battle of Fahl or Battle of Pella was a Byzantine-Arab battle fought between the Rashidun army under Khalid ibn al-Walid Saifullah and the Roman Empire under Theodore the Sacellarius , in Fahl in January 635 AD...
in January 635 AD.
The source of this article is wikipedia, the free encyclopedia.  The text of this article is licensed under the GFDL.