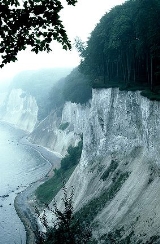 Encyclopedia
The Jasmund National Park is a nature reserve in the Jasmund
Jasmund
Jasmund is a peninsula of the island of Rügen in Mecklenburg-Vorpommern, Germany. It is connected to the Wittow peninsula and to the Muttland main section of Rügen by the narrow land bridges Schaabe and Schmale Heide, respectively. Sassnitz, Sagard and the Mukran international ferry terminal are on...
peninsula, in the northeast of Rügen
Rügen
Rügen is Germany's largest island. Located in the Baltic Sea, it is part of the Vorpommern-Rügen district of Mecklenburg-Vorpommern.- Geography :Rügen is located off the north-eastern coast of Germany in the Baltic Sea...
island in Mecklenburg-Vorpommern, Germany
Germany
Germany , officially the Federal Republic of Germany , is a federal parliamentary republic in Europe. The country consists of 16 states while the capital and largest city is Berlin. Germany covers an area of 357,021 km2 and has a largely temperate seasonal climate...
. It is famous for the largest chalk
Chalk
Chalk is a soft, white, porous sedimentary rock, a form of limestone composed of the mineral calcite. Calcite is calcium carbonate or CaCO3. It forms under reasonably deep marine conditions from the gradual accumulation of minute calcite plates shed from micro-organisms called coccolithophores....
cliff
Cliff
In geography and geology, a cliff is a significant vertical, or near vertical, rock exposure. Cliffs are formed as erosion landforms due to the processes of erosion and weathering that produce them. Cliffs are common on coasts, in mountainous areas, escarpments and along rivers. Cliffs are usually...
s of Germany, the so called Königsstuhl (German = "king's chair"). These cliffs are up to 161 m high above the Baltic Sea
Baltic Sea
The Baltic Sea is a brackish mediterranean sea located in Northern Europe, from 53°N to 66°N latitude and from 20°E to 26°E longitude. It is bounded by the Scandinavian Peninsula, the mainland of Europe, and the Danish islands. It drains into the Kattegat by way of the Øresund, the Great Belt and...
. The undisturbed beech forests behind the cliffs are also part of the national park.

The chalk cliffs face constant erosion
Erosion
Erosion is when materials are removed from the surface and changed into something else. It only works by hydraulic actions and transport of solids in the natural environment, and leads to the deposition of these materials elsewhere...
. With every storm, parts of the cliffs fall, including rocks and fossil
Fossil
Fossils are the preserved remains or traces of animals , plants, and other organisms from the remote past...
s of sponges, oyster
Oyster
The word oyster is used as a common name for a number of distinct groups of bivalve molluscs which live in marine or brackish habitats. The valves are highly calcified....
s and sea urchin
Sea urchin
Sea urchins or urchins are small, spiny, globular animals which, with their close kin, such as sand dollars, constitute the class Echinoidea of the echinoderm phylum. They inhabit all oceans. Their shell, or "test", is round and spiny, typically from across. Common colors include black and dull...
s.

The most majestic part of the cliffs is the 118-metre-high Königsstuhl (English: king's chair). One of the most scenic and best known of the chalk outcrops, the Wissower Klinken, collapsed into the Baltic Sea
Baltic Sea
The Baltic Sea is a brackish mediterranean sea located in Northern Europe, from 53°N to 66°N latitude and from 20°E to 26°E longitude. It is bounded by the Scandinavian Peninsula, the mainland of Europe, and the Danish islands. It drains into the Kattegat by way of the Øresund, the Great Belt and...
on February 24, 2005 in a landslide caused by spring-thaw weather conditions. The steep and sweeping vista was the subject of the well-known painting Chalk Cliffs on Rügen
Chalk Cliffs on Rügen
Chalk Cliffs on Rügen is an oil painting of circa 1818 by the German Romantic artist Caspar David Friedrich.-Development:In January 1818, Caspar David Friedrich married Christiane Caroline Bommer, who was about 20 years his junior. On their honeymoon in July and August 1818, they visited relatives...
by the 19th-century German Romantic
German Romanticism
For the general context, see Romanticism.In the philosophy, art, and culture of German-speaking countries, German Romanticism was the dominant movement of the late 18th and early 19th centuries. German Romanticism developed relatively late compared to its English counterpart, coinciding in its...
artist Caspar David Friedrich
Caspar David Friedrich
Caspar David Friedrich was a 19th-century German Romantic landscape painter, generally considered the most important German artist of his generation. He is best known for his mid-period allegorical landscapes which typically feature contemplative figures silhouetted against night skies, morning...
.

Because of the special geological characteristics of the Jasmund National Park, it is home to many rare plants and animals.

There are many swamp-like ponds in the forest behind the cliffs. In the woods of the Stubnitz there are numerous water-filled, undrained dells and hollows, most of which came into existence as ice-age dead ice holes. This is the place to see many plants, e.g. Black Alder
Black Alder
Alnus glutinosa is an alder native to most of Europe, including all of the British Isles and Fennoscandia and locally in southwest Asia....
, Malus sylvestris
Malus sylvestris
Malus sylvestris, the European wild apple, is a species of Malus , native to Europe from as far south as Spain, Italy and Greece to as far north as Scandinavia and Russia. Its scientific name means "forest apple", and the truly wild tree has thorns.In the past, M. sylvestris was thought to be an...
, Wild Service Tree
Wild Service Tree
Sorbus torminalis , sometimes known as the Chequer Tree or Checker Tree, is a species of Sorbus native to Europe from England and Wales east to Denmark and Poland, south to northwest Africa, and southeast to southwest Asia from Asia Minor to the Caucasus and Alborz mountains.It is a medium-sized...
, Taxus
Taxus
Taxus is a genus of yews, small coniferous trees or shrubs in the yew family Taxaceae. They are relatively slow-growing and can be very long-lived, and reach heights of 1-40 m, with trunk diameters of up to 4 m...
and types of orchids, for instance Cypripedium calceolus
Cypripedium calceolus
Cypripedium calceolus is a lady's-slipper orchid, and the type species of the genus Cypripedium.It is a widespread plant worldwide, found from Europe east through Asia to the Pacific Ocean. It is found in open woodland on moist calcareous soils. It is found in continental Europe growing in the...
.

Ornithologists
Ornithology
Ornithology is a branch of zoology that concerns the study of birds. Several aspects of ornithology differ from related disciplines, due partly to the high visibility and the aesthetic appeal of birds...
can find a variety of birds, for example the White-tailed Eagle
White-tailed Eagle
The White-tailed Eagle , also known as the Sea Eagle, Erne , or White-tailed Sea-eagle, is a large bird of prey in the family Accipitridae which includes other raptors such as hawks, kites, and harriers...
, Kingfisher, House Martin
House Martin
The Common House Martin , sometimes called the Northern House Martin or, particularly in Europe, just House Martin, is a migratory passerine bird of the swallow family which breeds in Europe, north Africa and temperate Asia; and winters in sub-Saharan Africa and tropical Asia...
and the Peregrine Falcon
Peregrine Falcon
The Peregrine Falcon , also known as the Peregrine, and historically as the Duck Hawk in North America, is a widespread bird of prey in the family Falconidae. A large, crow-sized falcon, it has a blue-gray back, barred white underparts, and a black head and "moustache"...
.