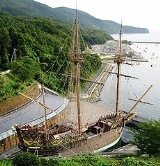 San Juan Bautista (“St. John the Baptist”) (originally called Date Maru, 伊達丸 in Japanese) was one of Japan's first Japanese-built Western-style sail warships. She crossed the Pacific in 1614. She was of the Spanish galleon
Galleon
A galleon was a large, multi-decked sailing ship used primarily by European states from the 16th to 18th centuries. Whether used for war or commerce, they were generally armed with the demi-culverin type of cannon.-Etymology:...
type, known in Japan as Nanban-Sen
Nanban trade
The or the in Japanese history extends from the arrival of the first Europeans to Japan in 1543, to their near-total exclusion from the archipelago in 1614, under the promulgation of the "Sakoku" Seclusion Edicts.- Etymology :...
(南蛮船, lit. “Southern Barbarian ships”).

She transported a Japanese diplomatic mission of 180 people during the first leg of their trip to the Vatican as envoys to Pope Paul V
Pope Paul V
-Theology:Paul met with Galileo Galilei in 1616 after Cardinal Bellarmine had, on his orders, warned Galileo not to hold or defend the heliocentric ideas of Copernicus. Whether there was also an order not to teach those ideas in any way has been a matter for controversy...
, headed by Hasekura Tsunenaga
Hasekura Tsunenaga
Hasekura Rokuemon Tsunenaga or was a Japanese samurai and retainer of Date Masamune, the daimyo of Sendai....
and accompanied by the Spanish friar Luis Sotelo
Luis Sotelo
Blessed Luis Sotelo was a Franciscan friar who died as a martyr in Japan, in 1624, and was beatified by Pope Pius IX in 1867....
. After transporting Hasekura to the Spanish possessions of Mexico
Mexico
The United Mexican States , commonly known as Mexico , is a federal constitutional republic in North America. It is bordered on the north by the United States; on the south and west by the Pacific Ocean; on the southeast by Guatemala, Belize, and the Caribbean Sea; and on the east by the Gulf of...
, the ship returned to Japan. Hasekura and the embassy went on to Europe, eventually reaching Rome.

San Juan Bautista was built in 1613 by Date Masamune
Date Masamune
was a regional strongman of Japan's Azuchi-Momoyama period through early Edo period. Heir to a long line of powerful daimyo in the Tōhoku region, he went on to found the modern-day city of Sendai...
, the Daimyo
Daimyo
is a generic term referring to the powerful territorial lords in pre-modern Japan who ruled most of the country from their vast, hereditary land holdings...
of Sendai
Sendai, Miyagi
is the capital city of Miyagi Prefecture, Japan, and the largest city in the Tōhoku Region. In 2005, the city had a population of one million, and was one of Japan's 19 designated cities...
in northern Japan
Japan
Japan is an island nation in East Asia. Located in the Pacific Ocean, it lies to the east of the Sea of Japan, China, North Korea, South Korea and Russia, stretching from the Sea of Okhotsk in the north to the East China Sea and Taiwan in the south...
, in Tsuki-No-Ura harbour (Ishinomaki
Ishinomaki, Miyagi
is a city located in Miyagi Prefecture, Japan.As of January 1, 2010, the city had an estimated population of 164,294 and a population density of 295.83 persons per km²...
, Miyagi
Miyagi Prefecture
is a prefecture of Japan in the Tōhoku Region on Honshu island. The capital is Sendai.- History :Miyagi Prefecture was formerly part of the province of Mutsu. Mutsu Province, on northern Honshu, was one of the last provinces to be formed as land was taken from the indigenous Emishi, and became the...
). The project had been approved by the Bakufu, the Shogun
Shogun
A was one of the hereditary military dictators of Japan from 1192 to 1867. In this period, the shoguns, or their shikken regents , were the de facto rulers of Japan though they were nominally appointed by the emperor...
's government in Edo
Edo
, also romanized as Yedo or Yeddo, is the former name of the Japanese capital Tokyo, and was the seat of power for the Tokugawa shogunate which ruled Japan from 1603 to 1868...
.

The Shogun already had two smaller ships (80 and 120 tons) built for him by the English pilot William Adams
William Adams (sailor)
William Adams , also known in Japanese as Anjin-sama and Miura Anjin , was an English navigator who travelled to Japan and is believed to be the first Englishman ever to reach that country...
, and the larger one, the San Buena Ventura
Japanese warship San Buena Ventura
San Buena Ventura was a 120 ton ship built in Japan under the direction of the English navigator and adventurer William Adams for the shogun Tokugawa Ieyasu....
, was given to Spanish shipwrecked sailors for their return to Mexico in 1610. The Shogun also issued numerous permits for Red seal ships
Red seal ships
were Japanese armed merchant sailing ships bound for Southeast Asian ports with a red-sealed patent issued by the early Tokugawa shogunate in the first half of the 17th century...
, destined to Asian trade and incorporating many elements of Western ship design.

San Juan Bautista is reported to have required 45 days' work, with the participation of technical experts from the Bakufu, 800 shipwrights, 700 smith
Smith (metalwork)
A metalsmith, often shortened to smith, is a person involved in making metal objects. In contemporary use a metalsmith is a person who uses metal as a material, uses traditional metalsmithing techniques , whose work thematically relates to the practice or history of the practice, or who engages in...
s, and 3000 carpenter
Carpenter
A carpenter is a skilled craftsperson who works with timber to construct, install and maintain buildings, furniture, and other objects. The work, known as carpentry, may involve manual labor and work outdoors....
s. Two Spanish men are also reported to have participated to the endeavour: the friar Luis Sotelo
Luis Sotelo
Blessed Luis Sotelo was a Franciscan friar who died as a martyr in Japan, in 1624, and was beatified by Pope Pius IX in 1867....
, and the Spanish captain Sebastian Vizcaino
Sebastián Vizcaíno
Sebastián Vizcaíno was a Spanish soldier, entrepreneur, explorer, and diplomat whose varied roles took him to New Spain, the Philippines, the Baja California peninsula, the California coast and Japan.-Early career:...
.

These efforts were seen with disapproval by the Spanish government in Manila
Manila
Manila is the capital of the Philippines. It is one of the sixteen cities forming Metro Manila.Manila is located on the eastern shores of Manila Bay and is bordered by Navotas and Caloocan to the north, Quezon City to the northeast, San Juan and Mandaluyong to the east, Makati on the southeast,...
, and Los Rios Coronel suggested that Luis Sotelo should not be allowed into Japan any further (C.R. Boxer).

Upon completion, the ship left on October 28, 1613 for Acapulco
Acapulco
Acapulco is a city, municipality and major sea port in the state of Guerrero on the Pacific coast of Mexico, southwest from Mexico City. Acapulco is located on a deep, semi-circular bay and has been a port since the early colonial period of Mexico’s history...
in Mexico
Mexico
The United Mexican States , commonly known as Mexico , is a federal constitutional republic in North America. It is bordered on the north by the United States; on the south and west by the Pacific Ocean; on the southeast by Guatemala, Belize, and the Caribbean Sea; and on the east by the Gulf of...
, with around 180 people on board, consisting of 10 samurai of the Shogun (led by the Minister of the Navy Mukai Shooken), 12 samurai from Sendai, 120 Japanese merchants, sailors, and servants, and around 40 Spaniards and Portuguese. The ship arrived in Acapulco on January 25, 1614 after three months at sea.

After a year in Acapulco, the ship returned to Japan on April 28, 1615, as Hasekura continued to Europe. It seems that around 50 specialists in mining and silver-refining were invited to Japan on this occasion, so that they could help develop the mining industry in the Sendai area. A group of Franciscan
Franciscan
Most Franciscans are members of Roman Catholic religious orders founded by Saint Francis of Assisi. Besides Roman Catholic communities, there are also Old Catholic, Anglican, Lutheran, ecumenical and Non-denominational Franciscan communities....
s led by Father Diego de Santa Catalina, sent as a religious embassy to Tokugawa Ieyasu
Tokugawa Ieyasu
was the founder and first shogun of the Tokugawa shogunate of Japan , which ruled from the Battle of Sekigahara  in 1600 until the Meiji Restoration in 1868. Ieyasu seized power in 1600, received appointment as shogun in 1603, abdicated from office in 1605, but...
also sailed on the ship. The San Juan Bautista arrived in Uraga
Uraga
is a subdivision of the city of Yokosuka, Kanagawa Prefecture, Japan. It is located on the south eastern side of the Miura Peninsula, at the northern end of the Uraga Channel, at the entrance of Tokyo Bay.-History:...
on August 15, 1615.

In September 1616, the San Juan Batista headed again to Acapulco, at the request of Luis Sotelo. She was sailed by Captain Yokozawa Shogen
Yokozawa Shogen
' was a Japanese samurai of the 16th century, who served Date Masamune, ruler of the Sendai domain.In September 1616, under an order by Date Masamune, Yokozawa went to Mexico on the San Juan Bautista in order to fetch his compatriot Hasekura Rokuemon who was coming back from an embassy to...
, but the trip went wrong and around 100 sailors died en route. San Juan Bautista finally arrived in Acapulco in May 1617. Sotelo and Hasekura met in Mexico for the final trip back to Japan. In April 1618 the San Juan Bautista arrived to the Philippines
Philippines
The Philippines , officially known as the Republic of the Philippines , is a country in Southeast Asia in the western Pacific Ocean. To its north across the Luzon Strait lies Taiwan. West across the South China Sea sits Vietnam...
, where she was sold to the Spanish government there, with the objective of building up defenses against the Dutch. Hasekura returned to Japan in 1620.

By the time Hasekura came back, Japan had changed quite drastically: Christianity was being eradicated since its interdiction in 1614, and Japan was moving towards a period of Seclusion. Because of these persecutions, the trade agreements with Mexico he had been trying to establish were also denied. In the end, his embassy seems to have had few results, and he died two years later of illness.

A new San Juan Bautista was reconstructed in 1993 on the basis of the records of the House of Date. Although the exact blueprints have not been found, the ship’s dimensions were recorded properly, permitting the reconstitution. The ship is currently on display in a theme park in Ishinomaki
Ishinomaki, Miyagi
is a city located in Miyagi Prefecture, Japan.As of January 1, 2010, the city had an estimated population of 164,294 and a population density of 295.83 persons per km²...
, in northern Japan, close to the location where she was originally built. The replica survived the 2011 Tōhoku earthquake and tsunami
2011 Tōhoku earthquake and tsunami
The 2011 earthquake off the Pacific coast of Tohoku, also known as the 2011 Tohoku earthquake, or the Great East Japan Earthquake, was a magnitude 9.0 undersea megathrust earthquake off the coast of Japan that occurred at 14:46 JST on Friday, 11 March 2011, with the epicenter approximately east...
intact with minor damages, and there are hopes of using the ship as a symbol of the town's reconstruction.