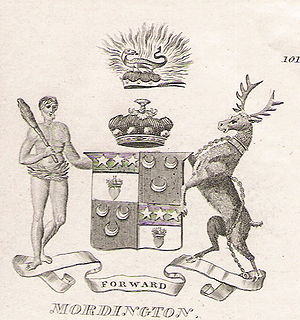 Sir James Douglas, 1st Lord Mordington (died February 11, 1656) was the second son of William Douglas, 10th Earl of Angus
William Douglas, 10th Earl of Angus
William Douglas, 10th Earl of Angus was the son of William, the 9th Earl . He was a direct descendant of King James I through his paternal grandmother, Lady Agnes Keith, a daughter of William Keith, 3rd Earl Marischal....
by his spouse Elizabeth, daughter of Laurence Oliphant, 4th Lord Oliphant. He was created, by King Charles I
Charles I of England
Charles I was King of England, King of Scotland, and King of Ireland from 27 March 1625 until his execution in 1649. Charles engaged in a struggle for power with the Parliament of England, attempting to obtain royal revenue whilst Parliament sought to curb his Royal prerogative which Charles...
, a Lord of Parliament
Lord of Parliament
A Lord of Parliament was the lowest rank of nobility automatically entitled to attend sessions of the pre-Union Parliament of Scotland. Post-Union, it is a member of the lowest rank of the Peerage of Scotland, ranking below a viscount...
on November 14, 1641 as Lord Mordington.

He had been knighted prior to 1621, and obtained a grant from the Crown of the lands and barony of Over Mordington
Mordington
Mordington is an agricultural parish in the extreme south-east of Berwickshire in the Scottish Borders region. It is five miles from Berwick-upon-Tweed and borders Northumberland to the east, and south , Foulden to the west, and Lamberton to the north. The parish is bisected by the A6105 Berwick to...
in Berwickshire
Berwickshire
Berwickshire or the County of Berwick is a registration county, a committee area of the Scottish Borders Council, and a lieutenancy area of Scotland, on the border with England. The town after which it is named—Berwick-upon-Tweed—was lost by Scotland to England in 1482...
on August 24, 1634, although he appears to have laready been in possession, as a minute of the Privy Council of Scotland
Privy Council of Scotland
The Privy Council of Scotland was a body that advised the King.In the range of its functions the council was often more important than the Estates in the running the country. Its registers include a wide range of material on the political, administrative, economic and social affairs of Scotland...
records Sir James Douglas of Mordington, Alexander Lawder, brother of Robert Lawder of Edrington
Edrington
Edrington is a medieval estate occupying the lower part of Mordington parish in Berwickshire, Scottish Borders, Scotland, five miles west of Berwick-upon-Tweed. From probably the 14th century, if not earlier, a castle occupied the steep hill above the mill of the same name on the Whiteadder Water...
, Alexander Torrie in Mordington, and Patrick Torrie there, are found in dispute with George Roull, Minister at Mordington, when the latter is asking for his sureties (or cautions) to be reduced, dated April 1631.

A Summons (National Archives of Scotland
National Archives of Scotland
Based in Edinburgh, the National Archives of Scotland are the national archives of Scotland. The NAS claims to have one of the most varied collection of archives in Europe...
GD220/3/74) was issued to James, Lord Mordington, and others, charging them to compear before the Estates of Parliament on June 4 following, to answer for not "swearing and subscribing" the Solemn League and Covenant
Solemn League and Covenant
The Solemn League and Covenant was an agreement between the Scottish Covenanters and the leaders of the English Parliamentarians. It was agreed to in 1643, during the First English Civil War....
, and to "swear and subscribe it publicly in open face of Parliament", under the pains therein mentioned, dated April 20, 1644. The Presbytery were clearly not satisfied with that summons, and a Visitation {GD220/3/74) to the Kirk of Mordingtoun by the Presbytery of Chirnsyde was made in order to get him to conform to the Ordinance of the Commissioners of the General Assembly of the Church of Scotland
General Assembly of the Church of Scotland
The General Assembly of the Church of Scotland is the sovereign and highest court of the Church of Scotland, and is thus the Church's governing body[1] An Introduction to Practice and Procedure in the Church of Scotland, A Gordon McGillivray, 2nd Edition .-Church courts:As a Presbyterian church,...
"that James Lord Mordingtoun, in the face of God's kirk, should renounce Pope
Pope
The Pope is the Bishop of Rome, a position that makes him the leader of the worldwide Catholic Church . In the Catholic Church, the Pope is regarded as the successor of Saint Peter, the Apostle...
ry, swear and subscribe the Confession of Faith and also the Solemn League and Covenant, which his Lordship did. Mordington
Mordington
Mordington is an agricultural parish in the extreme south-east of Berwickshire in the Scottish Borders region. It is five miles from Berwick-upon-Tweed and borders Northumberland to the east, and south , Foulden to the west, and Lamberton to the north. The parish is bisected by the A6105 Berwick to...
Kirk
Kirk
Kirk can mean "church" in general or the Church of Scotland in particular. Many place names and personal names are also derived from it.-Basic meaning and etymology:...
, May 23, 1644".

Lord Mordington held property over the border, and was liable for English taxation there. On October 17, 1644, a letter was sent, addressed to Colonel Lindsay, Governor of Berwick-upon-Tweed
Berwick-upon-Tweed
Berwick-upon-Tweed or simply Berwick is a town in the county of Northumberland and is the northernmost town in England, on the east coast at the mouth of the River Tweed. It is situated 2.5 miles south of the Scottish border....
, certifying that the Committee and Commissioners for the Parliament of England have assessed the estate of James, Lord Mordington, in the bounds of Berwick to pay £100 Sterling for the forces, and requiring the governor to collect said sum.

He was present at his Tower house
Tower house
A tower house is a particular type of stone structure, built for defensive purposes as well as habitation.-History:Tower houses began to appear in the Middle Ages, especially in mountain or limited access areas, in order to command and defend strategic points with reduced forces...
of Mordington on July 22, 1650, when Oliver Cromwell
Oliver Cromwell
Oliver Cromwell was an English military and political leader who overthrew the English monarchy and temporarily turned England into a republican Commonwealth, and served as Lord Protector of England, Scotland, and Ireland....
's forces arrived and set up camp there for several days, using his home as their headquarters.

Lord Mordington married in 1624, Anne, only child and daughter of Laurence Oliphant, 5th Lord Oliphant. This lady claimed the peerage of Oliphant, but in the Court of Session
Court of Session
The Court of Session is the supreme civil court of Scotland, and constitutes part of the College of Justice. It sits in Parliament House in Edinburgh and is both a court of first instance and a court of appeal....
in 1633, it was determined, in the presence of King Charles I
Charles I of England
Charles I was King of England, King of Scotland, and King of Ireland from 27 March 1625 until his execution in 1649. Charles engaged in a struggle for power with the Parliament of England, attempting to obtain royal revenue whilst Parliament sought to curb his Royal prerogative which Charles...
, in favour of the heir male. The king, however, decided to create her husband a peer with the title of Lord Mordington, with the precedency of Oliphant (1458). They had: