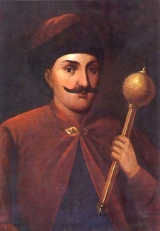 Encyclopedia
Ivan Vyhovsky (date of birth unknown, died 1664) was a hetman
Hetman
Hetman was the title of the second-highest military commander in 15th- to 18th-century Poland and the Grand Duchy of Lithuania, which together, from 1569 to 1795, comprised the Polish-Lithuanian Commonwealth, or Rzeczpospolita....
(or otoman) of the Ukrainian
Ukraine
Ukraine is a country in Eastern Europe. It has an area of 603,628 km², making it the second largest contiguous country on the European continent, after Russia...
Cossacks during three years (1657–59) of the Russo-Polish War (1654–1667)
Russo-Polish War (1654–1667)
The Russo-Polish War of 1654–1667, also called Thirteen Years' War, First Northern War, War for Ukraine was the last major conflict between Tsardom of Russia and the Polish-Lithuanian Commonwealth. Between 1655 and 1660, the Second Northern War was also fought in the Polish-Lithuanian Commonwealth,...
. He was the successor to the famous hetman and rebel leader Bohdan Khmelnytsky
Bohdan Khmelnytsky
Bohdan Zynoviy Mykhailovych Khmelnytsky was a hetman of the Zaporozhian Cossack Hetmanate of Polish–Lithuanian Commonwealth . He led an uprising against the Commonwealth and its magnates which resulted in the creation of a Cossack state...
(see Hetmans of Ukrainian Cossacks
Hetmans of Ukrainian Cossacks
Hetman of Ukrainian Cossacks as a title was not officially recognized internationally until the creation of the Ukrainian Hetmanate. With the creation of Registered Cossacks units their leaders were unofficially referred to as hetmans, however officially the title was known as the "Senior of His...
). His time as hetman was characterized by his generally pro-Polish
Polish-Lithuanian Commonwealth
The Polish–Lithuanian Commonwealth was a dualistic state of Poland and Lithuania ruled by a common monarch. It was the largest and one of the most populous countries of 16th- and 17th‑century Europe with some and a multi-ethnic population of 11 million at its peak in the early 17th century...
policies, which led to his defeat by pro-Russian
Tsardom of Russia
The Tsardom of Russia was the name of the centralized Russian state from Ivan IV's assumption of the title of Tsar in 1547 till Peter the Great's foundation of the Russian Empire in 1721.From 1550 to 1700, Russia grew 35,000 km2 a year...
faction among the Cossacks.

Vyhovsky was born in his family estate of Vyhov, near Korosten
Korosten
Korosten is a historic city and a large railway node in the Zhytomyr Oblast of northern Ukraine. Serving as the administrative center of the Korosten Raion , the city itself is also designated as a separate raion within the oblast, and is located on the Uzh River.The city was founded over a...
in the Kiev voivodship, a son of Ostap Vyhovsky, a vicegerent
Vicegerent
Vicegerent is the official administrative deputy of a ruler or head of state: vice + gerere .-Related usage:*The Byzantine Emperors held as a title "God's Vicegerent on Earth"....
of Kiev
Kiev
Kiev or Kyiv is the capital and the largest city of Ukraine, located in the north central part of the country on the Dnieper River. The population as of the 2001 census was 2,611,300. However, higher numbers have been cited in the press....
fortress under voivode  Adam Kisiel
Adam Kisiel
Adam Świętołdycz Kisiel was the Voivode of Kiev and castellan or voivode of Czernihów . He was the last Orthodox senator of the Polish-Lithuanian Commonwealth...
and an Orthodox nobleman from the Kiev region. There is also a possibility that the birth occurred at another family estate, Hoholiv, located near Poltava
Poltava
Poltava is a city in located on the Vorskla River in central Ukraine. It is the administrative center of the Poltava Oblast , as well as the surrounding Poltava Raion of the oblast. Poltava's estimated population is 298,652 ....
. Ostap Vyhovsky had 3 other sons and a daughter (all of them were exiled to Siberia after the downfall of Ivan Vyhovsky).

Ivan Vyhovsky studied at the Kyiv Brotherhood Collegium, and excelled in languages (including Church Slavonic, Polish, Latin and Russian, in addition to Ukrainian) and calligraphy
Calligraphy
Calligraphy is a type of visual art. It is often called the art of fancy lettering . A contemporary definition of calligraphic practice is "the art of giving form to signs in an expressive, harmonious and skillful manner"...
. He later was the main financial supporter of the Collegium.

In Polish military service, he was captured by Khmelnystsky's rebel Cossack forces at Zhovti Vody
Zhovti Vody
Zhovti Vody is a city in south-central Ukraine's Dnipropetrovsk Oblast . The city is designated as a separate raion within the oblast, and is located on the Yellow River approximately west of the oblast's administrative center, Dnipropetrovsk.Center for the extraction and processing of uranium...
in May of 1648, he was freed on account of his education and experience and rose to become secretary-general or chancellor (heneralny pysar) of the Cossacks and one of Khmelnytsky's closest advisors.

Elected hetman upon the death of Khmelnytsky, Vyhovsky sought to find a counterbalance to the pervasive Russian influence present in Ukraine after the 1654 Treaty of Pereyaslav
Treaty of Pereyaslav
The Treaty of Pereyaslav is known in history more as the Council of Pereiaslav.Council of Pereyalslav was a meeting between the representative of the Russian Tsar, Prince Vasili Baturlin who presented a royal decree, and Bohdan Khmelnytsky as the leader of Cossack Hetmanate. During the council...
. While the Cossack elite and the ecclesiastical authorities supported this pro-Polish orientation, the masses and the Cossack rank-and-file remained deeply suspicious and resentful of the Poles, by whom they had long been forced into serf
SERF
A spin exchange relaxation-free magnetometer is a type of magnetometer developed at Princeton University in the early 2000s. SERF magnetometers measure magnetic fields by using lasers to detect the interaction between alkali metal atoms in a vapor and the magnetic field.The name for the technique...
dom. As a result, some Cossacks, led by Iakiv Barabash, put forward an alternative candidate for the hetmancy in Martyn Pushkar
Martyn Pushkar
Martyn Pushkar was a polkovnyk of Poltava's Cossack regiment known for his loyalty to Muscovy. Together with Iakiv Barabash Pushkar led a pro-Muscovy uprising against Ukrainian hetman Ivan Vyhovsky in 1657. After inflicting several defeats on Vyhovsky's Cossacks and his Polish allies, Martyn...
, the colonel of the Poltava
Poltava
Poltava is a city in located on the Vorskla River in central Ukraine. It is the administrative center of the Poltava Oblast , as well as the surrounding Poltava Raion of the oblast. Poltava's estimated population is 298,652 ....
regiment of Cossacks. The rebellion against the hetman grew, and came to a head when Vyhovsky's forces clashed with the pro-Russian Cossacks in June of 1658. Vyhovsky's forces prevailed, killing Pushkar and forcing Barabash to flee (he would later be captured and executed). However, it had clearly been a fratricidal conflict, resulting in some 50,000 deaths.
Following his consolidation of power within Ukraine, Vyhovsky attempted to reach an acceptable agreement with the Poles. Encouraged by his aristocratic friend Yuri Nemyrych
Yuri Nemyrych
Yuri Nemyrych was a Polish-Ruthenian magnate and politician.-Biography:Jerzy Niemirycz was born in Ovruch, Podolia in 1612 during the Polish-Lithuanian intervention in Muscovy, the oldest son of wealthy Polish-Lithuanian Anti-Trinitarians noble family, Klamry coat of arms...
, Vyhovsky entered negotiations with the Polish government, which resulted in the Treaty of Hadiach
Treaty of Hadiach
The Treaty of Hadiach was a treaty signed on 16 September 1658 in Hadiach between representatives of the Polish-Lithuanian Commonwealth and Cossacks...
, signed on September 16, 1658. Under the conditions of the treaty, Ukraine as the Duchy of Ruthenia, would become a third and autonomous component of the Polish-Lithuanian Commonwealth
Polish-Lithuanian Commonwealth
The Polish–Lithuanian Commonwealth was a dualistic state of Poland and Lithuania ruled by a common monarch. It was the largest and one of the most populous countries of 16th- and 17th‑century Europe with some and a multi-ethnic population of 11 million at its peak in the early 17th century...
, under the ultimate sovereignty of the King of Poland, but with its own military, courts, and treasury. Additionally, adherents of the Orthodox faith were to receive equal consideration as Catholics
Roman Catholic Church
The Catholic Church, also known as the Roman Catholic Church, is the world's largest Christian church, with over a billion members. Led by the Pope, it defines its mission as spreading the gospel of Jesus Christ, administering the sacraments and exercising charity...
. As such, the treaty as signed would have assured the Cossacks of autonomy and dignity to an extent they had not known for centuries.

However, the Treaty of Hadiach was never implemented. Following its signing, a massive Russian army (according to some sources up to 150,000 soldiers; about 100,000 of them were occupied by the siege of Konotop, the rest were massacred by Tatars when trying to follow after Vyhovsky's cossacks, resulting in 20 000-30 000 lost among the Russians) led by the boyar
Boyar
A boyar, or bolyar , was a member of the highest rank of the feudal Moscovian, Kievan Rus'ian, Bulgarian, Wallachian, and Moldavian aristocracies, second only to the ruling princes , from the 10th century through the 17th century....
Aleksei Trubetskoi crossed into Ukraine. In response, Vyhovsky led 60,000 Cossacks against the Russians alongside his Polish and 40,000 Tatar
Crimean Tatars
Crimean Tatars or Crimeans are a Turkic ethnic group that originally resided in Crimea. They speak the Crimean Tatar language...
allies. Near Konotop
Konotop
Konotop is a city in northern Ukraine within the Sumy Oblast. Konotop is the center of the Konotop Raion , and is located about 129 km from Sumy, the Oblast capital. It is host to Konotop air base.-History:...
, the Russians were soundly defeated. However, Vyhovsky was not able to capitalize on this victory, as the Russian garrisons in several Cossack towns continued to hold out and his Tatar allies were forced to return to the Crimea
Crimea
Crimea , or the Autonomous Republic of Crimea , is a sub-national unit, an autonomous republic, of Ukraine. It is located on the northern coast of the Black Sea, occupying a peninsula of the same name...
when it was attacked by independent Cossacks. Furthermore, pro-Russia unrest led by Ivan Bohun
Ivan Bohun
Ivan Bohun was a Ukrainian Cossack colonel. Close associate and friend of Bohdan Khmelnytsky, he opposed both the pacts with Polish-Lithuanian Commonwealth and with Tsardom of Russia ....
broke out again amongst the Cossacks. In 1659, faced with a second rebellion against his rule and unable to master the dangerous and chaotic forces vying for power in Ukraine, Vyhovsky surrendered the office of hetman and retired to Poland
Poland
Poland , officially the Republic of Poland , is a country in Central Europe bordered by Germany to the west; the Czech Republic and Slovakia to the south; Ukraine, Belarus and Lithuania to the east; and the Baltic Sea and Kaliningrad Oblast, a Russian exclave, to the north...
. In 1660, he was appointed Voivode of Kiev, a position he kept until his death in 1664. Kiev itself was held by the Russian troops in this period, after voivodes Vasily Sheremetev and Yuri Baryatinsky
Yuri Baryatinsky
Yuri Nikitich Baryatinski was a Russian knyaz, boyar und voyevoda from the Rurikid house of Baryatinsky.Baryatinsky was born as a son of Nikita Petrovich Baryatinsky...
managed to repel two Vyhovsky's and one Polish assault on the city.

Unfortunately for Vyhovsky, his service on behalf of the Polish-Lithuanian Commonwealth and his willing surrender of power did not protect him, and in 1664, another Cossack hetman, Pavlo Teteria
Pavlo Teteria
Pavlo Teteria was Hetman of Right-Bank Ukraine .Before his hetmancy he served in a number of high positions under Bohdan Khmelnytsky, and Ivan Vyhovsky....
, seeing in Vyhovsky a potential rival, accused him of treason and betrayal (reconciliation with Russia and Russian followers amongst the Cossacks) before the Polish authorities. Consequently Vyhovsky was charged with treason, arrested and executed without trial by the Polish commander colonel Sebastian Machowski, making him another victim of the fratricidal power struggles that devastated Ukrainian territory in the latter half of the 17th century.