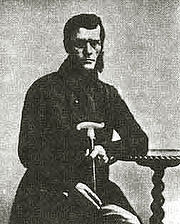 Ivan Vasilyevich Kireyevsky ' onMouseout='HidePop("65683")' href="/topics/Moscow">Moscow
Moscow
Moscow is the capital, the most populous city, and the most populous federal subject of Russia. The city is a major political, economic, cultural, scientific, religious, financial, educational, and transportation centre of Russia and the continent...
— 23 June 1856) was a Russian
Russians
The Russian people are an East Slavic ethnic group native to Russia, speaking the Russian language and primarily living in Russia and neighboring countries....
literary critic and philosopher who, together with Aleksey Khomyakov
Aleksey Khomyakov
Aleksey Stepanovich Khomyakov was a Russian religious poet who co-founded the Slavophile movement along with Ivan Kireyevsky, and became one of its most distinguished theoreticians....
, co-founded the Slavophile
Slavophile
Slavophilia was an intellectual movement originating from 19th century that wanted the Russian Empire to be developed upon values and institutions derived from its early history. Slavophiles were especially opposed to the influences of Western Europe in Russia. There were also similar movements in...
movement.

Ivan Kireyevsky and his brother Pyotr were born into a cultivated noble family of considerable means. Their father was known for hating French atheism so passionately that he would burn heaps of Voltaire
Voltaire
François-Marie Arouet , better known by the pen name Voltaire , was a French Enlightenment writer, historian and philosopher famous for his wit and for his advocacy of civil liberties, including freedom of religion, free trade and separation of church and state...
's books, acquired specifically for the purpose; his fatal disease was contracted while healing the wounded soldiers during the French invasion of Russia
French invasion of Russia
The French invasion of Russia of 1812 was a turning point in the Napoleonic Wars. It reduced the French and allied invasion forces to a tiny fraction of their initial strength and triggered a major shift in European politics as it dramatically weakened French hegemony in Europe...
. The boy was just six at the time of his death; he was brought up by a maternal uncle, Vasily Zhukovsky
Vasily Zhukovsky
Vasily Andreyevich Zhukovsky was the foremost Russian poet of the 1810s and a leading figure in Russian literature in the first half of the 19th century...
, and the mother, M-me Avdotya Yelagina, an influential lady who held a brilliant salon in Moscow
Moscow
Moscow is the capital, the most populous city, and the most populous federal subject of Russia. The city is a major political, economic, cultural, scientific, religious, financial, educational, and transportation centre of Russia and the continent...
. She professed her dislike of Peter the Great
Peter I of Russia
Peter the Great, Peter I or Pyotr Alexeyevich Romanov Dates indicated by the letters "O.S." are Old Style. All other dates in this article are New Style. ruled the Tsardom of Russia and later the Russian Empire from until his death, jointly ruling before 1696 with his half-brother, Ivan V...
for his treatment of his wife Eudoxia
Eudoxia Lopukhina
Tsarina Evdokiya Feodorovna Lopukhina was the first wife of Peter I of Russia. They married in 1689 but divorced in 1698...
and the Lopukhin family, to which she was related. The father's distaste for French culture and the mother's distrust of post-Petrine officialdom may have shaped Kireyevsky's views on Russia and its history.

Starting in 1821, Kireyevsky attended the Moscow University, where he became interested in contemporary German philosophy and joined the circle of "wisdom-lovers" (Lyubomudry
Lyubomudry
Lyubomudry were the members of the secret circle "Society of Lyubomudriye" which existed in Russia in 1823-1825. Lyubomudriye was the Slavophile replacement term for "philosophy", i.e., the formal translations would be "Philosophers" and "The Society of Philosophy", respectively. The circle was...
), led by Dmitry Venevitinov
Dmitry Venevitinov
Dmitry Vladimirovich Venevitinov was a minor Russian Romantic poet who died at the age of 21, carrying with him one of the greatest hopes of Russian literature....
and Vladimir Odoevsky
Vladimir Odoevsky
Prince Vladimir Fyodorovich Odoevsky was a prominent Russian philosopher, writer, music critic, philanthropist and pedagogue. He became known as the "Russian Hoffmann" on account of his keen interest in fantasmagoric tales and musical criticism.-Life:...
. He was particularly impressed by the teachings of Schelling
Schelling
Notable people with the last name of Schelling include:* Ernest Schelling, American composer* Friedrich Wilhelm Joseph Schelling, German philosopher* Thomas Schelling, American economist and Nobel laureate...
, whose representation of the world as a living organism was in tune with Kireyevsky's own intense dislike of European rationalism and fragmentedness. Kireyevsky's original literary works do not give him a place in the history of Russian literature
Russian literature
Russian literature refers to the literature of Russia or its émigrés, and to the Russian-language literature of several independent nations once a part of what was historically Russia or the Soviet Union...
, but he did gain a measure of fame by publishing the penetrating analyses of contemporary authors. His 1828 review of Pushkin's poetry, written in purple prose
Purple prose
Purple prose is a term of literary criticism used to describe passages, or sometimes entire literary works, written in prose so extravagant, ornate, or flowery as to break the flow and draw attention to itself. Purple prose is sensually evocative beyond the requirements of its context...
and entitled "Some Observations about the Character of Pushkin's Poetry", contained the first in-depth assessment of Eugene Onegin
Eugene Onegin
Eugene Onegin is a novel in verse written by Alexander Pushkin.It is a classic of Russian literature, and its eponymous protagonist has served as the model for a number of Russian literary heroes . It was published in serial form between 1825 and 1832...
. Later, Kireyevsky would exchange letters with Pushkin and publish his works in his short-lived periodical "Yevropeyets" (The European).

After having been refused by his cousin, Kireyevsky set out for Europe, where he attended the lectures of Schelling, Schleiermacher, Hegel, and Michelet
Jules Michelet
Jules Michelet was a French historian. He was born in Paris to a family with Huguenot traditions.-Early life:His father was a master printer, not very prosperous, and Jules assisted him in the actual work of the press...
. During his travels, he perceived the rotten foundations of Western society, based on individualism
Individualism
Individualism is the moral stance, political philosophy, ideology, or social outlook that stresses "the moral worth of the individual". Individualists promote the exercise of one's goals and desires and so value independence and self-reliance while opposing most external interference upon one's own...
, which he would later contrast with the integrality (sobornost
Sobornost
Sobornost is a term coined by the early Slavophiles, Ivan Kireevsky and Aleksey Khomyakov, to underline the need for cooperation between people at the expense of individualism on the basis that the opposing groups focus on what is common between them. Khomyakov believed the West was progressively...
) of Russian society. Back in Moscow by 1832, he "united all the literary aristocracy" (as Pogodin
Mikhail Pogodin
Mikhail Petrovich Pogodin was a Russian historian and journalist who, jointly with Nikolay Ustryalov, dominated the national historiography between the death of Nikolay Karamzin in 1826 and the rise of Sergey Solovyov in the 1850s. He is best remembered as a staunch proponent of the Normanist...
said) under the aegis of "Yevropeyets". The journal was banned after two issues, but not before Kireyevsky published his large article The Nineteenth Century, his first extended critique of Western philosophy and values.

The failure of "Yevropeyets" exacerbated Kireyevsky's disappointment in Russian intellectuals and elite. He married and applied himself wholeheartedly to family life. Many critics, starting with Herzen
Alexander Herzen
Aleksandr Ivanovich Herzen was a Russian pro-Western writer and thinker known as the "father of Russian socialism", and one of the main fathers of agrarian populism...
, tended to attribute the twelve-year hiatus in Kireyevsky's literary career to his Oblomov
Oblomov
Oblomov is the best known novel by Russian writer Ivan Goncharov, first published in 1859. Oblomov is also the central character of the novel, often seen as the ultimate incarnation of the superfluous man, a symbolic character in 19th-century Russian literature...
ian inclination to indecision and inaction. Indeed, his whole literary output consists of a dozen full-length articles and may be collected within a single volume.

It was not until the early 1840s that Kireyevsky reappeared on the intellectual scene of Moscow to take the side of Khomyakov in his controversy with Herzen, Granovsky
Timofey Granovsky
Timofey Nikolayevich Granovsky was a founder of mediaeval studies in the Russian Empire.Granovsky was born in Oryol, Russia. He studied at the universities of Moscow and Berlin, where he was profoundly influenced by Hegelian ideas of Leopold von Ranke and Friedrich Karl von Savigny...
and other young "Westernizers". Since the reactionary reign of Nicholas I
Nicholas I of Russia
Nicholas I , was the Emperor of Russia from 1825 until 1855, known as one of the most reactionary of the Russian monarchs. On the eve of his death, the Russian Empire reached its historical zenith spanning over 20 million square kilometers...
was not favourable for journalistic activities, Khomyakov and Kireyevsky criticized the "one-sided, superficial, analytical rationality" of the West in salons and soirées of Moscow.

In his few written works, Kireyevsky contrasted the philosophy of Plato
Plato
Plato , was a Classical Greek philosopher, mathematician, student of Socrates, writer of philosophical dialogues, and founder of the Academy in Athens, the first institution of higher learning in the Western world. Along with his mentor, Socrates, and his student, Aristotle, Plato helped to lay the...
and Greek Church Fathers
Church Fathers
The Church Fathers, Early Church Fathers, Christian Fathers, or Fathers of the Church were early and influential theologians, eminent Christian teachers and great bishops. Their scholarly works were used as a precedent for centuries to come...
(notably Maximus the Confessor
Maximus the Confessor
Maximus the Confessor was a Christian monk, theologian, and scholar. In his early life, he was a civil servant, and an aide to the Byzantine Emperor Heraclius...
) with the rationalism of Aristotle
Aristotle
Aristotle was a Greek philosopher and polymath, a student of Plato and teacher of Alexander the Great. His writings cover many subjects, including physics, metaphysics, poetry, theater, music, logic, rhetoric, linguistics, politics, government, ethics, biology, and zoology...
and medieval Catholic Doctors of the Church. He blamed Aristotle "for molding the mind of the West in the iron cast of reasonableness", which he defined as timid prudence (as opposed to true wisdom), or the "striving for the better within the circle of the commonplace". Hegel's doctrines were seen as the latest emanation of Aristotle's analytical approach, which divorced mind from soul, thoughts from (religious) feelings.

Kireyevsky aspired to retrieve the lost wholeness of Man in the teachings of Eastern Orthodoxy. His devout wife introduced him to the elders (startsy
Starets
A starets is an elder of a Russian Orthodox monastery who functions as venerated adviser and teacher. Elders or spiritual fathers are charismatic spiritual leaders whose wisdom stems from God as obtained from ascetic experience...
) of the Optina Monastery
Optina Monastery
The Optina Hermitage is an Eastern Orthodox monastery for men near Kozelsk in Russia. In the 19th century, the Optina was the most important spiritual centre of the Russian Orthodox Church and served as the model for several other monasteries, including the nearby Shamordino Convent...
, which he frequented in the declining years of his life. Although he did not share Samarin
Yuri Samarin
Yuri Fyodorovich Samarin was a leading Russian Slavophile thinker and one of the architects of the Emancipation reform of 1861....
's radical enthusiasm for all things pre-Petrine, Kireyevsky did extol the spiritual treasures of medieval Russia. According to him, the monasteries of ancient Rus' "radiated a uniform and harmonious light of faith and learning" to disparate Slavonic tribes and principalities. The net of churches and monasteries covered Russia so thickly, that these "bonds of spiritual community" unified the country into "a single living organism".

Ivan Kireyevsky died at the age of fifty during a cholera epidemic. His brother Pyotr outlived him by several months. They were buried side by side in the Optina Monastery, the first laymen to be honoured so.
The source of this article is wikipedia, the free encyclopedia.  The text of this article is licensed under the GFDL.