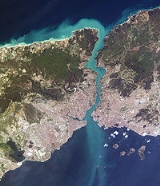 Encyclopedia
Istanbul Province is a province
Provinces of Turkey
Turkey is divided into 81 provinces, called il in Turkish .A province is administered by an appointed governor , and was formerly termed a "governorate" ....
located in north-west Turkey
Turkey
Turkey , known officially as the Republic of Turkey , is a Eurasian country located in Western Asia and in East Thrace in Southeastern Europe...
. It has an area of 5,196 km² and a population of 13,255,685. The population was 10,018,735 in 2000. It is surrounded by the provinces of Tekirdağ
Tekirdag Province
The Tekirdağ Province is in Trakya , the northwestern part of Turkey. The capital city is Tekirdağ. It is famous for its meatball called "Tekirdağ köfte" and the Turkish alcoholic drink called Tekirdağ rakısı.-Districts:...
to the west, Kocaeli
Izmit
İzmit is a city in Turkey, administrative center of Kocaeli Province as well as the Kocaeli Metropolitan Municipality. It is located at the Gulf of İzmit in the Sea of Marmara, about east of Istanbul, on the northwestern part of Anatolia. The city center has a population of 294.875...
to the east, the Black Sea
Black Sea
The Black Sea is bounded by Europe, Anatolia and the Caucasus and is ultimately connected to the Atlantic Ocean via the Mediterranean and the Aegean seas and various straits. The Bosphorus strait connects it to the Sea of Marmara, and the strait of the Dardanelles connects that sea to the Aegean...
to the northern part and the Sea of Marmara
Sea of Marmara
The Sea of Marmara , also known as the Sea of Marmora or the Marmara Sea, and in the context of classical antiquity as the Propontis , is the inland sea that connects the Black Sea to the Aegean Sea, thus separating Turkey's Asian and European parts. The Bosphorus strait connects it to the Black...
to the south. The Bosphorus (Boğaziçi) Strait divides the province in two parts: the Europe
Europe
Europe is, by convention, one of the world's seven continents. Comprising the westernmost peninsula of Eurasia, Europe is generally 'divided' from Asia to its east by the watershed divides of the Ural and Caucasus Mountains, the Ural River, the Caspian and Black Seas, and the waterways connecting...
an side and the Asia
Asia
Asia is the world's largest and most populous continent, located primarily in the eastern and northern hemispheres. It covers 8.7% of the Earth's total surface area and with approximately 3.879 billion people, it hosts 60% of the world's current human population...
n side.

The capital of the province is the city of Istanbul
Istanbul
Istanbul , historically known as Byzantium and Constantinople , is the largest city of Turkey. Istanbul metropolitan province had 13.26 million people living in it as of December, 2010, which is 18% of Turkey's population and the 3rd largest metropolitan area in Europe after London and...
, which, since 2004, has the same boundaries as the province.