Encyclopedia
Israel Railways is the principal passenger railway operating company in Israel
Israel
The State of Israel is a parliamentary republic located in the Middle East, along the eastern shore of the Mediterranean Sea...
, and is responsible for all inter-city
Inter-city rail
Inter-city rail services are express passenger train services that cover longer distances than commuter or regional trains.There is no precise definition of inter-city rail. Its meaning may vary from country to country...
and suburban rail way passenger and freight traffic in the country. All its lines are standard gauge
Standard gauge
The standard gauge is a widely-used track gauge . Approximately 60% of the world's existing railway lines are built to this gauge...
. The network is centered in Israel's densely populated coastal plain, from which lines radiate out in many directions. Unlike road vehicles (including trams), Israeli railway trains run on the left hand tracks. 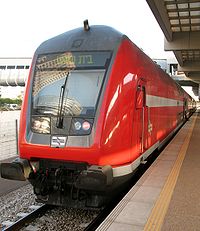