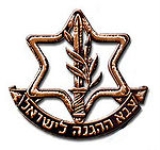 
The Israel Defense Forces
Israel Defense Forces
The Israel Defense Forces , commonly known in Israel by the Hebrew acronym Tzahal , are the military forces of the State of Israel. They consist of the ground forces, air force and navy. It is the sole military wing of the Israeli security forces, and has no civilian jurisdiction within Israel...
(IDF) have a unique rank structure. Because the IDF is an integrated force, ranks are the same in all services (there is no differentiation between army, navy, air force, etc.) The ranks are derived from those of the paramilitary Haganah
Haganah
Haganah was a Jewish paramilitary organization in what was then the British Mandate of Palestine from 1920 to 1948, which later became the core of the Israel Defense Forces.- Origins :...
developed in the Mandate period to protect the Yishuv
Yishuv
The Yishuv or Ha-Yishuv is the term referring to the body of Jewish residents in Palestine before the establishment of the State of Israel...
. This origin is reflected in the slightly-compacted rank structure; for instance, the Chief of Staff (Ramatkal
Ramatkal
The Chief of the General Staff, also known as the Commander-in-Chief of the Israel Defense Forces is the supreme commander and Chief of Staff of the Israel Defense Forces. At any given time, the Chief of Staff is the only active officer holding the IDF's highest rank, Rav Aluf , which is usually...
) is seemingly only equivalent to a Lieutenant General
Lieutenant General
Lieutenant General is a military rank used in many countries. The rank traces its origins to the Middle Ages where the title of Lieutenant General was held by the second in command on the battlefield, who was normally subordinate to a Captain General....
in other militaries.

When the IDF were created in 1948, there were 7 enlisted and NCO ranks, and 8 officer ranks. The ranks were as follows:

Ranks and their insignia were influenced by the British / Commonwealth model. This was later reformed when the IDF started to adopt a rank system similar to the United States armed forces in the 1990s.

The Rav Samal Yehidati was equal to a Warrant Officer II (Company Sergeant Major
Company Sergeant Major
A company sergeant major is the senior non-commissioned soldier of a company in the armies of many Commonwealth countries, responsible for standards and discipline. In combat, his prime responsibility is the supply of ammunition to the company...
) and Rav Samal Rishon was equivalent to a Warrant Officer I (Regimental Sergeant Major
Regimental Sergeant Major
Regimental Sergeant Major is an appointment held by warrant officers class 1 in the British Army, the British Royal Marines and in the armies of many Commonwealth nations, including Australia and New Zealand; and by chief warrant officers in the Canadian Forces...
). They wore their insignia on the lower sleeve of their shirt or jacket or on a leather wrist strap when wearing short-sleeve order.