According to the Queen's Regulations and Orders:

(2) The rank of a master corporal remains that of corporal.

(3) Master corporals have seniority among themselves in their order of seniority as corporals.

(4) Master corporals have authority and powers of command over all other corporals." — QR&O 3.08

As mentioned above, the Master Corporal is senior to the Corporal (and its Naval counterpart, Leading Seaman
Leading Seaman
Leading seaman is a junior non-commissioned rank or rate in navies, particularly those of the Commonwealth. When it is used by NATO nations, leading seaman has the rank code of OR-4. It is often equivalent to the army and air force rank of corporal and some navies use corporal rather than...
). It is junior to the rank of Sergeant
Sergeant
Sergeant is a rank used in some form by most militaries, police forces, and other uniformed organizations around the world. Its origins are the Latin serviens, "one who serves", through the French term Sergent....
(Sgt) and its equivalent naval rank, Petty Officer 2nd Class
Petty Officer 2nd Class
Petty officer, 2nd class, PO2, is a Naval non-commissioned member rank of the Canadian Forces. It is senior to the rank of master seaman and its equivalents, and junior to petty officer 1st-class and its equivalents...
(PO2). Master Corporals and Master Seamen together with Corporals and Leading Seamen make up the cadre of junior non-commissioned officers. 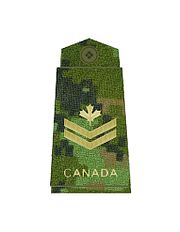 The rank insignia of a Master Corporal is a 2-bar chevron, worn point down, surmounted by a maple leaf. Embroidered rank badgers are worn in "CF gold" thread on rifle green (Army) or Air Force blue (Air Force) melton, stitched to the upper sleeves of the Service Dress jacket; as miniature gold metal and rifle-green enamel badges on the collars of the Army dress shirt and Army outerwear jackets; in "old-gold" thread on Air Force blue slip-ons on Air Force shirts, sweaters, and coats; and in tan (Army) or dark blue (Air Force) thread on CADPAT slip-ons on the Operational Dress uniform. Insignia for mess kit is determined by branch or regimental tradition.

Master Corporals normally mess
Mess
A mess is the place where military personnel socialise, eat, and live. In some societies this military usage has extended to other disciplined services eateries such as civilian fire fighting and police forces. The root of mess is the Old French mes, "portion of food" A mess (also called a...
and billet with the Junior Ranks
Junior Ranks
Junior Ranks is the collective term in Canada for all the non-commissioned members ranked below that of Sergeant/Petty Officer 2nd Class; in other words, all junior non-commissioned officers and privates...
.

The Master Corporal appointment came into existence after the Unification of the armed forces of Canada in the late 1960s. A power vacuum was inadvertently created when private soldiers were promoted to the rank of corporal as an incentive for continuing in the Forces at a time when Unification (and the role of the United States in the Vietnam War) made the military an unpopular option for employment. Eventually, corporals who had passed the "B" phase of their leadership training took to wearing a crown over their chevrons, and this arrangement was eventually formalized by having a maple leaf replace the crown, and the new "'B' Corporals", as they were known, became Master Corporals.

The general requirements for promotion to Master Corporal include a Qualification Level 5 course
Course (education)
The very broad dictionary meaning of the word course is the act or action of moving in a path from point to point . There are multiple meanings for this word, some of which include: general line of orientation, a mode of action, part of a meal, a mode of action, and many more. This article focuses...
(known as a Journeyman course in some trades), a primary leadership
Leadership
Leadership has been described as the “process of social influence in which one person can enlist the aid and support of others in the accomplishment of a common task". Other in-depth definitions of leadership have also emerged.-Theories:...
qualification course (PLQ), and a time in the rank of Corporal for a minimum of two years.

However, certain trades have their own particular qualifications in addition to the above. For example, infantry
Infantry
Infantrymen are soldiers who are specifically trained for the role of fighting on foot to engage the enemy face to face and have historically borne the brunt of the casualties of combat in wars. As the oldest branch of combat arms, they are the backbone of armies...
combines the Qualification Level 5B course, Qualification Level 6A, and Junior Leader's course in a single Infantry Section Commander's Course. In addition to be promoted to Master Corporal an infantry soldier must have a machine gunner's specialization course.

Master Corporals often serve as Training Non-Commissioned Officers for the purposes of training new soldiers. They are often a new recruit's first taste of military life.
The source of this article is wikipedia, the free encyclopedia.  The text of this article is licensed under the GFDL.