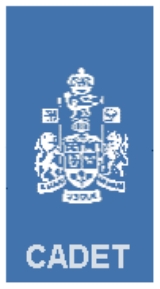 The French language
French language
French is a Romance language spoken as a first language in France, the Romandy region in Switzerland, Wallonia and Brussels in Belgium, Monaco, the regions of Quebec and Acadia in Canada, and by various communities elsewhere. Second-language speakers of French are distributed throughout many parts...
form is adjudant-chef (adjuc).

The rank insignia of the CWO is similar to the Coat of Arms of Canada, worn on both forearms of the Service Dress tunic; in gold metal and green enamel miniature pins on the collar of the Service Dress shirt and outerwear coats (Army only); on CADPAT
CADPAT
Canadian Disruptive Pattern is the computer-generated digital camouflage pattern currently used by the Canadian Forces . CADPAT is designed to reduce the likelihood of detection by night vision devices. The basic uniform consists of a wide brim combat hat, helmet cover, shirt, jacket, trousers,...
slipons worn in the middle of the chest, embroidered in tan (Army) or blue (Air Force) thread; and in gold thread on blue slip-ons on both shoulders of other uniforms (Air Force only). For whatever reason, the Canadian Forces did not update the CWO/CPO1 insignia to reflect the 1985 changes to the Coat of Arms of Canada, specifically the addition of an annulus behind the shield bearing the motto of the Order of Canada. (This would make the insignia technically incorrect.)

CWOs are generally initially addressed as "Chief Warrant Officer", and thereafter as "Sir" or "Ma'am" by subordinates; and as Mr. or Ms. by commissioned officers. If they hold the appointment of Regimental Sergeant-Major, they may also be addressed as "RSM" by the Commanding Officer
Commanding officer
The commanding officer is the officer in command of a military unit. Typically, the commanding officer has ultimate authority over the unit, and is usually given wide latitude to run the unit as he sees fit, within the bounds of military law...
. CWOs are never addressed as "Chief", this being a form of addressed reserved for Chief Petty Officer
Chief Petty Officer
A chief petty officer is a senior non-commissioned officer in many navies and coast guards.-Canada:"Chief Petty Officer" refers to two ranks in the Canadian Navy...
s. Civilians can address them as Chief Warrant Officer or CWO or as Mr. or Ms.

CWOs may hold a number of appointments, some of which are listed below:

Special appointments or Senior Appointments for Chief Warrant Officers and Chief Petty Officers 1st Class entitle the incumbents to wear a modified rank badge or an addition to the rank badge. They are as follows:

CWOs generally mess
Mess
A mess is the place where military personnel socialise, eat, and live. In some societies this military usage has extended to other disciplined services eateries such as civilian fire fighting and police forces. The root of mess is the Old French mes, "portion of food" A mess (also called a...
and billet with other Warrant Officer
Warrant Officer
A warrant officer is an officer in a military organization who is designated an officer by a warrant, as distinguished from a commissioned officer who is designated an officer by a commission, or from non-commissioned officer who is designated an officer by virtue of seniority.The rank was first...
s and with Sergeant
Sergeant
Sergeant is a rank used in some form by most militaries, police forces, and other uniformed organizations around the world. Its origins are the Latin serviens, "one who serves", through the French term Sergent....
s, and their Royal Canadian Navy equivalents, Chief Petty Officer
Chief Petty Officer
A chief petty officer is a senior non-commissioned officer in many navies and coast guards.-Canada:"Chief Petty Officer" refers to two ranks in the Canadian Navy...
s and Petty Officer
Petty Officer
A petty officer is a non-commissioned officer in many navies and is given the NATO rank denotion OR-6. They are equal in rank to sergeant, British Army and Royal Air Force. A Petty Officer is superior in rank to Leading Rate and subordinate to Chief Petty Officer, in the case of the British Armed...
s. Their mess on military bases or installations are generally named the "Warrant Officers and Sergeants Mess".

Although NCMs, CWOs generally wear the uniform accoutrements of commissioned officers; for example, officer cap badge, waistcoat instead of cummerbund with mess kit, Sam Browne belt instead of sash for infantry, etc.

IDF
Israel Defense Forces
The Israel Defense Forces , commonly known in Israel by the Hebrew acronym Tzahal , are the military forces of the State of Israel. They consist of the ground forces, air force and navy. It is the sole military wing of the Israeli security forces, and has no civilian jurisdiction within Israel...