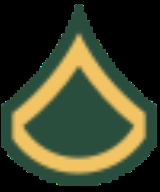 Overview
Private First Class is a military rank
Military rank
Military rank is a system of hierarchical relationships in armed forces or civil institutions organized along military lines. Usually, uniforms denote the bearer's rank by particular insignia affixed to the uniforms...
held by junior enlisted persons.
The rank of Private First Class (PFC) in the Singapore Armed Forces
Singapore Armed Forces
The Singapore Armed Forces is the military arm of the Total Defence of the Republic of Singapore; as well as the military component of the Ministry of Defence. The SAF comprises three branches: the Singapore Army, the Republic of Singapore Air Force and the Republic of Singapore Navy...
lies between the ranks of Private (PTE) and Lance-Corporal (LCP). It is usually held by conscript soldiers midway through their national service term. Privates First Class wear a rank insignia consisting of a single chevron pointing down.
In the United States Army, recruits usually enter the Army as Private
Private (rank)
A Private is a soldier of the lowest military rank .In modern military parlance, 'Private' is shortened to 'Pte' in the United Kingdom and other Commonwealth countries and to 'Pvt.' in the United States.Notably both Sir Fitzroy MacLean and Enoch Powell are examples of, rare, rapid career...
in pay grade E-1.

What is the starting pay of a private first class of the U.S. Marine corps?
More