Encyclopedia
Islands Brygge is a harbourfront area in central Copenhagen
Copenhagen
Copenhagen is the capital and largest city of Denmark, with an urban population of 1,199,224 and a metropolitan population of 1,930,260 . With the completion of the transnational Øresund Bridge in 2000, Copenhagen has become the centre of the increasingly integrating Øresund Region...
, Denmark
Denmark
Denmark is a Scandinavian country in Northern Europe. The countries of Denmark and Greenland, as well as the Faroe Islands, constitute the Kingdom of Denmark . It is the southernmost of the Nordic countries, southwest of Sweden and south of Norway, and bordered to the south by Germany. Denmark...
, located on the north-western coast of Amager
Amager
Amager is a Danish island in the Øresund. The Danish capital, Copenhagen, is partly situated on Amager, which is connected to the much larger island of Zealand by five bridges.-History:...
. The neighbourhood is noted for its waterfront park Havneparken
Havneparken
Havneparken is a public park located directly on the waterfront in the district of Islands Brygge in central Copenhagen, Denmark. It is one of the most lively and popular places along the Copenhagen harbourfront...
, which is one of the most popular areas along the Copenhagen harbourfront and the location of one of the Copenhagen Harbour Baths
Copenhagen Harbour Baths
Copenhagen Harbour Baths is a system of recreational bathing facilities along the waterfront of Copenhagen, Denmark. There are currently three harbour baths, the first and most well-known of which is located at Islands Brygge...
.

Established through a series of Land reclamations from the 1880s, serving both military, residential, industrial and dockland purposes. In the mid-20th century it developed an infamous reputation as a neglected industrial and dockland area, but since 2000 it has undergone massive redevelopment and has become a fashionable and attractive neighbourhood. It is characterized by a mixture of old buildings and modern architecture
Modern architecture
Modern architecture is generally characterized by simplification of form and creation of ornament from the structure and theme of the building. It is a term applied to an overarching movement, with its exact definition and scope varying widely...
, with a number of old structures relating to the area's dockland past preserved and converted into new functions.

Islands Brygge has an area of roughly 1 km and a population of 12,147 (2009), though it has never been an administrative unit, with formally defined boundaries. It can be thought of as bounded by the Stadsgraven
Stadsgraven
Stadsgraven is the canal which separates Christianshavn from the rest of Amager in Copenhagen, Denmark. It was originally a moat located in front of the Christianshavn Rampart as part of the city's Bastioned Ring Fortifications....
moat to the north, Copenhagen Harbour to the west, the Nokken allotments to the south, Ørestad North
Ørestad
Ørestad is a developing city area in Copenhagen, Denmark, on the island of Amager. It is expected that 20,000 people will live in Ørestad, 20,000 will study, and 80,000 people will be employed in the area...
to the north-east and Amager Common to the east. For some of its course, Artellerivej defines the eastern border, but towards the north Islands Brygge straddles the street; Islands Brygge Metro Station
Islands Brygge station
Islands Brygge Station is a rapid transit station opened in 2002 on the Copenhagen Metro. The last underground station on the M1 line, it is built using the cut-and-cover method. Buses also serve the station. It is located in fare zone 1....
, the Serum Institute
Statens Serum Institut
Statens Serum Institut , or SSI for short, is a Danish sector research institute located on the island of Amager in Copenhagen. Its purpose is to combat and prevent infectious diseases, congenital disorders, and threats from weapon of mass destruction...
and Islandsbrygge School, all of which are normally considered Islands Brygge, are all located east of Artellerivej.

The north-western shore of Amager was originally occupied by a shallow watered beach. The northern part of this area was reclaimed already in the 1620s with the construction of Christianshavn
Christianshavn
Christianshavn is an artificial island neighbourhood located in Copenhagen, Denmark. It was founded in the early 17th century by Christian IV as part of his extension of the fortifications of Copenhagen. Originally it was laid out as an independent privileged merchant's town with inspiration from...
and the fortification of Copenhagen, while the area later to become Islands Brygge remained under water until the 1880s. At that time the shoreline was situated just east of present-day Artellerivej. In the 1880s, Christian IV's Arsenal
Christian IV's Arsenal
Christian IV's Arsenal , is a historic building on Slotsholmen in central Copenhagen, Denmark. It was built by Christian IV of Denmark in 1604 as part of a grand scheme for the construction of a new naval harbour. The arsenal, along with several other buildings, surrounded the harbour basin which...
on Slotsholmen
Slotsholmen
Slotsholmen is an island in the harbour of Copenhagen, Denmark, and part of Copenhagen Inner City. Bishop Absalon constructed the city's first castle on the island in 1166-67 at the site where Christiansborg Palace, the seat of the Danish Parliament lies today...
had become too small, and the military received permission to reclaim an area to the southwest of Slotsgraven for the purpose of new military facilities. The area was filled in 1887-88 and a new arsenal, shooting ranges and army barracks
Barracks
Barracks are specialised buildings for permanent military accommodation; the word may apply to separate housing blocks or to complete complexes. Their main object is to separate soldiers from the civilian population and reinforce discipline, training and esprit de corps. They were sometimes called...
were constructed on the land.

Islands brygge was the hub of commercial ships sailing to and from Iceland
Iceland
Iceland , described as the Republic of Iceland, is a Nordic and European island country in the North Atlantic Ocean, on the Mid-Atlantic Ridge. Iceland also refers to the main island of the country, which contains almost all the population and almost all the land area. The country has a population...
, a former member (colony) of the state of Denmark
Denmark
Denmark is a Scandinavian country in Northern Europe. The countries of Denmark and Greenland, as well as the Faroe Islands, constitute the Kingdom of Denmark . It is the southernmost of the Nordic countries, southwest of Sweden and south of Norway, and bordered to the south by Germany. Denmark...
(1380-1944). The Danish trade monopoly in Iceland (1602-1787) was a lucrative business, establishing extreme wealth and political power for many of Copenhagen
Copenhagen
Copenhagen is the capital and largest city of Denmark, with an urban population of 1,199,224 and a metropolitan population of 1,930,260 . With the completion of the transnational Øresund Bridge in 2000, Copenhagen has become the centre of the increasingly integrating Øresund Region...
's Mayors and prominent citizens.

Towards the end of the 19th century, the Port of Copenhagen
Port of Copenhagen
The Port of Copenhagen is the largest Danish seaport and one of the largest ports in the Baltic Sea basin, with a total annual traffic capacity of around 18.3 million tonnes of cargo.-Statistics:...
had become very busy both with freight and passenger vessels and extensions were needed. In 1901, the Port Authorities extended the existing reclamation southwards to create new areas for the storage of coal, timber and other goods. From 1905 construction of residential buildings on the most inland parts of the new land began.

To improve road and rail connections between Zealand and Amager, a new bridge was constructed at the site of the present-day Langebro
Langebro
Langebro is a bascule bridge across the Inner Harbour of Copenhagen, Denmark, connecting Zealand-side H. C. Andersens Boulevard to Amager-side Amager Boulevard...
, replacing an older bridge leading to Christianshavn. The new bridge soon became outdated and in 1930 a new temporary bridge was built. Langebro was completed in 1954.

Still more land was reclaimed until 1933, when Islands Brygge had reached its current extension.

Under the Occupation of Denmark
Occupation of Denmark
Nazi Germany's occupation of Denmark began with Operation Weserübung on 9 April 1940, and lasted until German forces withdrew at the end of World War II following their surrender to the Allies on 5 May 1945. Contrary to the situation in other countries under German occupation, most Danish...
during World War II
World War II
World War II, or the Second World War , was a global conflict lasting from 1939 to 1945, involving most of the world's nations—including all of the great powers—eventually forming two opposing military alliances: the Allies and the Axis...
, many German troops were stationed at Islands Brygge, and the area was the target of a number acts of sabotage
Sabotage
Sabotage is a deliberate action aimed at weakening another entity through subversion, obstruction, disruption, or destruction. In a workplace setting, sabotage is the conscious withdrawal of efficiency generally directed at causing some change in workplace conditions. One who engages in sabotage is...
by the Danish resistance movement
Danish resistance movement
The Danish resistance movement was an underground insurgency movement to resist the German occupation of Denmark during World War II. Due to the unusually lenient terms given to Danish people by the Nazi occupation authority, the movement was slower to develop effective tactics on a wide scale...
. After World War II, the military presence in the area diminished and by 1976 most of the former military buildings had been demolished or taken into other use.

The industrial activities continued in the area, but as a number of companies closed their production plants, Islands Brygge became known as a neglected and rough working-class neighborhood, dominated by abandoned industrial sites.

The first step towards the transformation of the area into a lively, fashionable neighbourhood was taken in 1984 with the establishment of Havneparken. During the 1990s, the area started to attract attention among real estate investors, and from 2000, as real estate prices grew dramatically, the area saw massive redevelopment with construction of numerous new office and residential buildings.

Islands Brygge is today a fashionable mainly residential neighbourhood, stretching from Langebro in the north to Bryggebroen in the south. The northern part of the area, from Langebro to Sturlasgade, is dominated by early 20th-century residential blocks with small shops at street level. 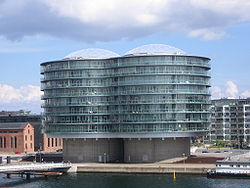 The area from Sturlasgade to Bryggebroen, also known as Havnestaden, used to be an industrial site processing soy beans for animal feed, but is after redevelopment dominated by new office and residential buildings. Some structures from the area's industrial and dockland past have been preserved and converted to other uses. These include Gemini Residence
Gemini Residence
Gemini Residence is a residential building on the Islands Brygge waterfront in Copenhagen, Denmark. Built to the design of MVRDV, the building has been created by converting two former seed silos...
, the Wennberg Silo and the Zepeline Building.

Havneparken
Havneparken
Havneparken is a public park located directly on the waterfront in the district of Islands Brygge in central Copenhagen, Denmark. It is one of the most lively and popular places along the Copenhagen harbourfront...
(English: The Harbour Park), located directly on the waterfront, is the main recreational area of the neighbourhood and one of the most lively and popular places along the Copenhagen harbourfront. It has retained several features from the area's industrial past, including old railway tracks and an old railway car, while an old ship hull
Hull (watercraft)
A hull is the watertight body of a ship or boat. Above the hull is the superstructure and/or deckhouse, where present. The line where the hull meets the water surface is called the waterline.The structure of the hull varies depending on the vessel type...
turned upside-down serves as a pavilion
Pavilion (structure)
In architecture a pavilion has two main meanings.-Free-standing structure:Pavilion may refer to a free-standing structure sited a short distance from a main residence, whose architecture makes it an object of pleasure. Large or small, there is usually a connection with relaxation and pleasure in...
. The park is also the location of the Islands Brygge Cultural House and the Islands Brygge Harbour Bath
Copenhagen Harbour Baths
Copenhagen Harbour Baths is a system of recreational bathing facilities along the waterfront of Copenhagen, Denmark. There are currently three harbour baths, the first and most well-known of which is located at Islands Brygge...
.