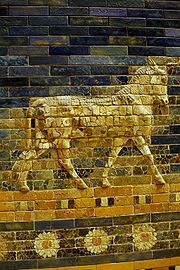 The Ishtar Gate was the eighth gate to the inner city of Babylon
Babylon
Babylon was an Akkadian city-state of ancient Mesopotamia, the remains of which are found in present-day Al Hillah, Babil Province, Iraq, about 85 kilometers south of Baghdad...
. It was constructed in about 575 BC by order of King Nebuchadnezzar II on the north side of the city.

Dedicated to the Babylonian goddess Ishtar
Ishtar
Ishtar is the Assyrian and Babylonian goddess of fertility, love, war, and sex. She is the counterpart to the Sumerian Inanna and to the cognate north-west Semitic goddess Astarte.-Characteristics:...
, the gate was constructed using a rare blue stone called lapis lazuli
Lapis lazuli
Lapis lazuli is a relatively rare semi-precious stone that has been prized since antiquity for its intense blue color....
with alternating rows of bas-relief mušḫuššu (dragon
Dragon
A dragon is a legendary creature, typically with serpentine or reptilian traits, that feature in the myths of many cultures. There are two distinct cultural traditions of dragons: the European dragon, derived from European folk traditions and ultimately related to Greek and Middle Eastern...
s) and aurochs
Aurochs
The aurochs , the ancestor of domestic cattle, were a type of large wild cattle which inhabited Europe, Asia and North Africa, but is now extinct; it survived in Europe until 1627....
.

The roof and doors of the gate were of cedar, according to the dedication plaque. Through the gate ran the Processional Way, which was lined with walls covered in lion
Lion
The lion is one of the four big cats in the genus Panthera, and a member of the family Felidae. With some males exceeding 250 kg in weight, it is the second-largest living cat after the tiger...
s on glazed bricks (about 120 of them).

Statues of the deities were paraded through the gate and down the Processional Way each year during the New Year's celebration.

A reconstruction of the Ishtar Gate and Processional Way was built at the Pergamon Museum
Pergamon Museum
The Pergamon Museum is situated on the Museum Island in Berlin. The site was designed by Alfred Messel and Ludwig Hoffmann and was constructed in twenty years, from 1910 to 1930. The Pergamon houses original-sized, reconstructed monumental buildings such as the Pergamon Altar and the Market Gate...
in Berlin
Berlin
Berlin is the capital city of Germany and is one of the 16 states of Germany. With a population of 3.45 million people, Berlin is Germany's largest city. It is the second most populous city proper and the seventh most populous urban area in the European Union...
out of material excavated by Robert Koldewey
Robert Koldewey
Robert Johann Koldewey was a German architect, famous for his discovery of the ancient city of Babylon in modern day Iraq. He was born in Blankenburg am Harz in Germany, the duchy of Brunswick, and died in Berlin at the age of 70...
and finished in the 1930s. It includes the inscription plaque. It stands 47 feet high and 100 feet wide (14 meters by 30 meters). The excavation ran from 1902–1914, and, during that time, 45 feet of the foundation of the gate was uncovered.

The gate was in fact a double gate. The part that is shown in the Pergamon Museum today is only the smaller, frontal part, while the larger, back part was considered too large to fit into the constraints of the structure of the museum. It is in storage.

Parts of the gate and lions from the Processional Way are in various other museums around the world. Only three museums acquired dragons, while lions went to several museums. The Istanbul Archaeology Museum
Istanbul Archaeology Museum
The Istanbul Archaeology Museums is a group of three archeological museums located in the Eminönü district of Istanbul, Turkey, near Gülhane Park and Topkapı Palace.The Istanbul Archaeology Museums consists of three museums....
has lions, dragons, and bulls. The Detroit Institute of Arts
Detroit Institute of Arts
The Detroit Institute of Arts is a renowned art museum in the city of Detroit. In 2003, the DIA ranked as the second largest municipally owned museum in the United States, with an art collection valued at more than one billion dollars...
houses a dragon. The Röhsska Museum in Gothenburg, Sweden, has one dragon and one lion; the Louvre
Louvre
The Musée du Louvre – in English, the Louvre Museum or simply the Louvre – is one of the world's largest museums, the most visited art museum in the world and a historic monument. A central landmark of Paris, it is located on the Right Bank of the Seine in the 1st arrondissement...
, the State Museum of Egyptian Art
Staatliche Sammlung für Ägyptische Kunst
The Staatliches Museum Ägyptischer Kunst in Munich is the Bavarian State Collection for Ancient Egypt art. It displays exhibits from all periods of Ancient Egypt's history. The associated small Middle East section displays objects from the areas of Assyrian and Babylonian culture...
in Munich, the Royal Ontario Museum
Royal Ontario Museum
The Royal Ontario Museum is a museum of world culture and natural history in Toronto, Ontario, Canada. With its main entrance facing Bloor Street in Downtown Toronto, the museum is situated north of Queen's Park and east of Philosopher's Walk in the University of Toronto...
in Toronto, the University of Pennsylvania Museum of Archaeology and Anthropology
University of Pennsylvania Museum of Archaeology and Anthropology
The University of Pennsylvania Museum of Archaeology and Anthropology, commonly called The Penn Museum, is an archaeology and anthropology museum that is part of the University of Pennsylvania in the University City neighborhood of Philadelphia, Pennsylvania.-History:An internationally renowned...
in Philadelphia, the Metropolitan Museum of Art
Metropolitan Museum of Art
The Metropolitan Museum of Art is a renowned art museum in New York City. Its permanent collection contains more than two million works, divided into nineteen curatorial departments. The main building, located on the eastern edge of Central Park along Manhattan's Museum Mile, is one of the...
in New York, the Oriental Institute
Oriental Institute, Chicago
The Oriental Institute , established in 1919, is the University of Chicago's archeology museum and research center for ancient Near Eastern studies.- History and purpose:James Henry Breasted built up the collection of the Haskell Oriental Museum...
in Chicago, the Rhode Island School of Design Museum
Rhode Island School of Design Museum
Rhode Island School of Design Museum is a prominent art museum in Providence, Rhode Island affiliated with the well-known Rhode Island School of Design...
, the Museum of Fine Arts
Museum of Fine Arts, Boston
The Museum of Fine Arts in Boston, Massachusetts, is one of the largest museums in the United States, attracting over one million visitors a year. It contains over 450,000 works of art, making it one of the most comprehensive collections in the Americas...
in Boston, and the Yale University Art Gallery
Yale University Art Gallery
The Yale University Art Gallery houses a significant and encyclopedic collection of art in several buildings on the campus of Yale University in New Haven, Connecticut. Although it embraces all cultures and periods, the Gallery possesses especially renowned collections of early Italian painting,...
in New Haven, Connecticut, each have lions.