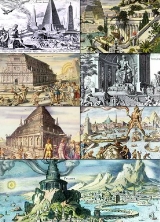 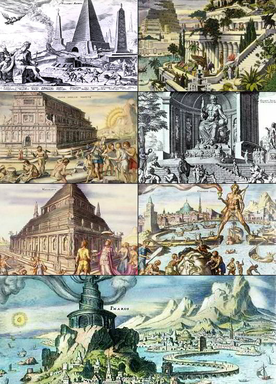 The Seven Wonders of the World (or the Seven Wonders of the Ancient World) refers to remarkable constructions of classical antiquity
Classical antiquity
Classical antiquity is a broad term for a long period of cultural history centered on the Mediterranean Sea, comprising the interlocking civilizations of ancient Greece and ancient Rome, collectively known as the Greco-Roman world...
listed by various authors in guidebooks popular among the ancient Hellenic
Ancient Greece
Ancient Greece is a civilization belonging to a period of Greek history that lasted from the Archaic period of the 8th to 6th centuries BC to the end of antiquity. Immediately following this period was the beginning of the Early Middle Ages and the Byzantine era. Included in Ancient Greece is the...
tourists, particularly in the 1st and 2nd centuries BC. The most prominent of these, the versions by Antipater of Sidon
Antipater of Sidon
Antipater of Sidon , Antipatros or Antipatros Sidonios in the Anthologies, was a Greek poet in the second half of the 2nd century BC....
and an observer identified as Philon of Byzantium, comprise seven works located around the eastern Mediterranean rim. The original list inspired innumerable versions
Wonders of the World
Various lists of the Wonders of the World have been compiled from antiquity to the present day, to catalogue the world's most spectacular natural wonders and manmade structures....
through the ages, often listing seven entries. Of the original Seven Wonders, only one—the Great Pyramid of Giza
Great Pyramid of Giza
The Great Pyramid of Giza is the oldest and largest of the three pyramids in the Giza Necropolis bordering what is now El Giza, Egypt. It is the oldest of the Seven Wonders of the Ancient World, and the only one to remain largely intact...
, the oldest of the ancient wonders—remains relatively intact.

The Greek conquest of much of the known world in the 4th century BC gave Hellenistic travellers access to the civilization
Civilization
Civilization is a sometimes controversial term that has been used in several related ways. Primarily, the term has been used to refer to the material and instrumental side of human cultures that are complex in terms of technology, science, and division of labor. Such civilizations are generally...
s of the Egyptians
Ancient Egypt
Ancient Egypt was an ancient civilization of Northeastern Africa, concentrated along the lower reaches of the Nile River in what is now the modern country of Egypt. Egyptian civilization coalesced around 3150 BC with the political unification of Upper and Lower Egypt under the first pharaoh...
, Persians, and Babylonia
Babylonia
Babylonia was an ancient cultural region in central-southern Mesopotamia , with Babylon as its capital. Babylonia emerged as a major power when Hammurabi Babylonia was an ancient cultural region in central-southern Mesopotamia (present-day Iraq), with Babylon as its capital. Babylonia emerged as...
ns. Impressed and captivated by the landmarks and marvels of the various lands, these travellers began to list what they saw. Such a list of these places made it easier to remember them. Indeed, instead of "wonders", the ancient Greeks spoke of "theamata", which means "sights", in other words "things to be seen". (Τὰ ἑπτὰ θεάματα τῆς οἰκουμένης [γῆς] ) Later, the word for "wonder" ("thaumata") was used, and this is also the case in modern Greek (Επτά θαύματα του αρχαίου κόσμου). Hence, the list was meant to be the Ancient World's counterpart of a travel guidebook.

Each person had his own version of the list, but the best known and earliest surviving was from a poem by Greek-speaking epigrammist Antipater of Sidon from around 140 BC. He named seven sites on his list, but was primarily in praise of the Temple of Artemis at Ephesus:

Another 2nd century BC observer, who claimed to be the mathematician Philon of Byzantium, wrote a short account entitled The Seven Sights of the World. However, the incomplete surviving manuscript only covered six of the supposedly seven places, which agreed with Antipater's list.

Earlier and later lists by the historian Herodotus
Herodotus
Herodotus was an ancient Greek historian who was born in Halicarnassus, Caria and lived in the 5th century BC . He has been called the "Father of History", and was the first historian known to collect his materials systematically, test their accuracy to a certain extent and arrange them in a...
(484 BC–ca. 425 BC) and the architect Callimachus
Callimachus
Callimachus was a native of the Greek colony of Cyrene, Libya. He was a noted poet, critic and scholar at the Library of Alexandria and enjoyed the patronage of the Egyptian–Greek Pharaohs Ptolemy II Philadelphus and Ptolemy III Euergetes...
of Cyrene
Cyrene, Libya
Cyrene was an ancient Greek colony and then a Roman city in present-day Shahhat, Libya, the oldest and most important of the five Greek cities in the region. It gave eastern Libya the classical name Cyrenaica that it has retained to modern times.Cyrene lies in a lush valley in the Jebel Akhdar...
(ca. 305–240 BC), housed at the Museum of Alexandria, survived only as references.

The Colossus of Rhodes was the last of the seven to be completed, after 280 BC, and the first to be destroyed, by an earthquake in 226/225 BC. Hence, all seven existed at the same time for a period of less than 60 years.
Antipater had an earlier version which replaced Lighthouse of Alexandria with the Walls of Babylon. Lists which preceded the construction of Colossus of Rhodes completed their seven entries with the inclusion of the Ishtar Gate
Ishtar Gate
The Ishtar Gate was the eighth gate to the inner city of Babylon. It was constructed in about 575 BC by order of King Nebuchadnezzar II on the north side of the city....
.

It is thought that the limitation of the lists to seven entries was attributed to the special magical meaning of the number. Geographically, the list covered only the sculptural and architectural monuments of the Mediterranean and Middle Eastern regions
Middle East
The Middle East is a region that encompasses Western Asia and Northern Africa. It is often used as a synonym for Near East, in opposition to Far East...
, then thought to encompass the "known" world for the Greeks. Hence, extant sites beyond this realm were not considered as part of contemporary accounts.

The primary accounts, coming from Hellenistic writers, also heavily influenced the places included in the wonders list. Five of the seven entries are a celebration of Greek accomplishments in the arts and architecture (the exceptions being the Pyramids of Giza and the Hanging Gardens of Babylon).

The seven wonders on Antipater's list won praises for their notable features, ranging from superlatives of the highest or largest of their types, to the artistry with which they were executed. Their architectural and artistic features were imitated throughout the Hellenistic world and beyond.

The Greek influence in Roman culture, and the revival of Greco-Roman artistic styles during the Renaissance caught the imagination of European artists and travellers. Paintings and sculptures alluding to Antipater's list were made, while adventurers flocked to the actual sites to personally witness the wonders. Legends circulated to further complement the superlatives of the wonders.

Of Antipater's wonders, the only one that has survived to the present day is the Great Pyramid of Giza. The existence of the Hanging Gardens has not been proven, although theories abound. Records and archaeology confirm the existence of the other five wonders. The Temple of Artemis and the Statue of Zeus were destroyed by fire, while the Lighthouse of Alexandria, Colossus, and tomb of Mausolus were destroyed by earthquakes. Among the artifacts
Artifact (archaeology)
An artifact or artefact is "something made or given shape by man, such as a tool or a work of art, esp an object of archaeological interest"...
to have survived are sculptures from the tomb of Mausolus and the Temple of Artemis in the British Museum
British Museum
The British Museum is a museum of human history and culture in London. Its collections, which number more than seven million objects, are amongst the largest and most comprehensive in the world and originate from all continents, illustrating and documenting the story of human culture from its...
in London.

Modern historians, working on the premise that the original Seven Ancient Wonders List was limited in its geographic scope, also had their versions to encompass sites beyond the Hellenistic realm—from the Seven Wonders of the Ancient World to the Seven Wonders of the World. Indeed, the "seven wonders" label has spawned innumerable versions among international organizations, publications and individuals based on different themes—works of nature, engineering masterpieces, constructions of the Middle Ages, etc. Its purpose has also changed from just a simple travel guidebook or a compendium of curious places to list of sites that entail and defense.