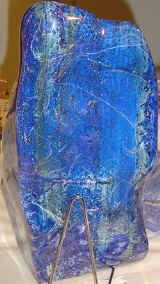 Overview
Lapis lazuli (sometimes abbreviated to lapis) is a relatively rare semi-precious stone
Gemstone
A gemstone or gem is a piece of mineral, which, in cut and polished form, is used to make jewelry or other adornments...
that has been prized since antiquity
Ancient history
Ancient history is the study of the written past from the beginning of recorded human history to the Early Middle Ages. The span of recorded history is roughly 5,000 years, with Cuneiform script, the oldest discovered form of coherent writing, from the protoliterate period around the 30th century BC...
for its intense blue
Blue
Blue is a colour, the perception of which is evoked by light having a spectrum dominated by energy with a wavelength of roughly 440–490 nm. It is considered one of the additive primary colours. On the HSV Colour Wheel, the complement of blue is yellow; that is, a colour corresponding to an equal...
color.

Lapis lazuli was being mined in the Badakhshan
Badakhshan
Badakhshan is an historic region comprising parts of what is now northeastern Afghanistan and southeastern Tajikistan. The name is retained in Badakhshan Province which is one of the thirty-four provinces of Afghanistan, in the far northeast of Afghanistan, and contains the Wakhan Corridor...
province of Afghanistan
Afghanistan
Afghanistan , officially the Islamic Republic of Afghanistan, is a landlocked country located in the centre of Asia, forming South Asia, Central Asia and the Middle East. With a population of about 29 million, it has an area of , making it the 42nd most populous and 41st largest nation in the world...
as early as the 3rd millenium BC and there are sources that are found as far east as in the region around Lake Baikal
Lake Baikal
Lake Baikal is the world's oldest at 30 million years old and deepest lake with an average depth of 744.4 metres.Located in the south of the Russian region of Siberia, between Irkutsk Oblast to the northwest and the Buryat Republic to the southeast, it is the most voluminous freshwater lake in the...
in Siberia
Siberia
Siberia is an extensive region constituting almost all of Northern Asia. Comprising the central and eastern portion of the Russian Federation, it was part of the Soviet Union from its beginning, as its predecessor states, the Tsardom of Russia and the Russian Empire, conquered it during the 16th...
. Trade in the stone is ancient enough for lapis jewelry to have been found at Predynastic Egypt
Predynastic Egypt
The Prehistory of Egypt spans the period of earliest human settlement to the beginning of the Early Dynastic Period of Egypt in ca. 3100 BC, starting with King Menes/Narmer....
ian and ancient Sumerian
Sumer
Sumer was a civilization and historical region in southern Mesopotamia, modern Iraq during the Chalcolithic and Early Bronze Age....
sites, and as lapis beads at neolithic
Neolithic
The Neolithic Age, Era, or Period, or New Stone Age, was a period in the development of human technology, beginning about 9500 BC in some parts of the Middle East, and later in other parts of the world. It is traditionally considered as the last part of the Stone Age...
burials in Mehrgarh
Mehrgarh
Mehrgarh , one of the most important Neolithic sites in archaeology, lies on the "Kachi plain" of Balochistan, Pakistan...
, the Caucasus
Caucasus
The Caucasus, also Caucas or Caucasia , is a geopolitical region at the border of Europe and Asia, and situated between the Black and the Caspian sea...
, and even as far from Afghanistan as Mauritania
Mauritania
Mauritania is a country in the Maghreb and West Africa. It is bordered by the Atlantic Ocean in the west, by Western Sahara in the north, by Algeria in the northeast, by Mali in the east and southeast, and by Senegal in the southwest...
.
Lapis lazuli is a rock
Rock (geology)
In geology, rock or stone is a naturally occurring solid aggregate of minerals and/or mineraloids.The Earth's outer solid layer, the lithosphere, is made of rock. In general rocks are of three types, namely, igneous, sedimentary, and metamorphic...
, largely formed from the mineral
Mineral
A mineral is a naturally occurring solid chemical substance formed through biogeochemical processes, having characteristic chemical composition, highly ordered atomic structure, and specific physical properties. By comparison, a rock is an aggregate of minerals and/or mineraloids and does not...
lazurite
Lazurite
Lazurite is a tectosilicate mineral with sulfate, sulfur and chloride with formula: 8[2|]. It is a feldspathoid and a member of the sodalite group. Lazurite crystallizes in the isometric system although well formed crystals are rare. It is usually massive and forms the bulk of the gemstone lapis...
.

The main component of lapis lazuli is lazurite (25% to 40%), a feldspathoid
Feldspathoid
The feldspathoids are a group of tectosilicate minerals which resemble feldspars but have a different structure and much lower silica content. They occur in rare and unusual types of igneous rocks....
silicate mineral with the formula (Na,Ca)8(AlSiO4)6(S,SO4,Cl)1-2.