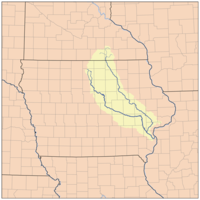 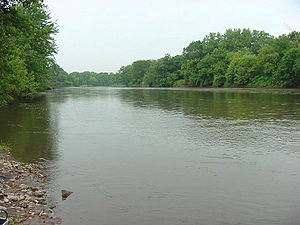 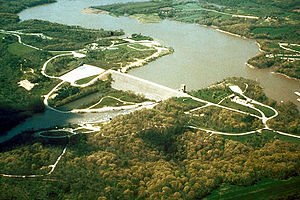 The Iowa River is a tributary
Tributary
A tributary or affluent is a stream or river that flows into a main stem river or a lake. A tributary does not flow directly into a sea or ocean...
of the Mississippi River
Mississippi River
The Mississippi River is the largest river system in North America. Flowing entirely in the United States, this river rises in western Minnesota and meanders slowly southwards for to the Mississippi River Delta at the Gulf of Mexico. With its many tributaries, the Mississippi's watershed drains...
in the state of Iowa
Iowa
Iowa is a state located in the Midwestern United States, an area often referred to as the "American Heartland". It derives its name from the Ioway people, one of the many American Indian tribes that occupied the state at the time of European exploration. Iowa was a part of the French colony of New...
in the United States
United States
The United States of America is a federal constitutional republic comprising fifty states and a federal district...
. It is about 323 miles (519.8 km) long and is open to small river craft to Iowa City
Iowa City, Iowa
Iowa City is a city in Johnson County, State of Iowa. As of the 2010 Census, the city had a total population of about 67,862, making it the sixth-largest city in the state. Iowa City is the county seat of Johnson County and home to the University of Iowa...
, about 65 miles (104.6 km) from its mouth. Its major tributary is the Cedar River.

The Iowa River is noted for recreational and commercial fishing. Game fish include largemouth
Largemouth bass
The largemouth bass is a species of black bass in the sunfish family native to North America . It is also known as widemouth bass, bigmouth, black bass, bucketmouth, Potter's fish, Florida bass, Florida largemouth, green bass, green trout, linesides, Oswego bass, southern largemouth...
and smallmouth bass
Smallmouth bass
The smallmouth bass is a species of freshwater fish in the sunfish family of the order Perciformes. It is the type species of its genus...
, walleye
Walleye
Walleye is a freshwater perciform fish native to most of Canada and to the northern United States. It is a North American close relative of the European pikeperch...
, northern pike
Northern Pike
The northern pike , is a species of carnivorous fish of the genus Esox...
, channel
Channel catfish
Channel catfish, Ictalurus punctatus, is North America's most numerous catfish species. It is the official fish of Missouri, Iowa, Nebraska, Kansas, and Tennessee, and is informally referred to as a "channel cat". In the United States they are the most fished catfish species with approximately 8...
and flathead catfish
Flathead catfish
The flathead catfish , also called the yellow cat, opelousas, and shovelhead cat, are large North American freshwater catfish. This is the only species of the genus Pylodictis...
, crappie
Crappie
Crappie is a genus of freshwater fish in the sunfish family of order Perciformes. The type species is P. annularis, the white crappie...
and other panfish
Panfish
A panfish, also spelled pan-fish or pan fish, is an edible game fish that usually doesn't outgrow the size of a frying pan. The term is also commonly used by anglers to refer to any small catch that will fit in a pan, but is large enough to be legal. However its definition and usage varies with...
. The Coralville Reservoir is commercially fished
Commercial fishing
Commercial fishing is the activity of catching fish and other seafood for commercial profit, mostly from wild fisheries. It provides a large quantity of food to many countries around the world, but those who practice it as an industry must often pursue fish far into the ocean under adverse conditions...
for carp
Carp
Carp are various species of oily freshwater fish of the family Cyprinidae, a very large group of fish native to Europe and Asia. The cypriniformes are traditionally grouped with the Characiformes, Siluriformes and Gymnotiformes to create the superorder Ostariophysi, since these groups have certain...
and buffalo fish
Ictiobus
Ictiobus, also known as Buffalo fish, is a genus of freshwater fish common in the United States. It is sometimes mistaken for carp because of its flat face and large, silver scales running along the body, though it lacks the whisker-like mouth appendages common to carp...
.

The Iowa can flood, notably in the June 2008 Midwest floods
June 2008 Midwest floods
The June 2008 Midwestern United States floods were flooding events which affected portions of the Midwest United States. After months of heavy precipitation, a number of rivers overflowed their banks for several weeks at a time and broke through levees at numerous locations. Flooding continued...
, and the Great Flood of 1993
Great Flood of 1993
The Great Mississippi and Missouri Rivers Flood of 1993 occurred in the American Midwest, along the Mississippi and Missouri rivers and their tributaries, from April to October 1993. The flood was among the most costly and devastating to ever occur in the United States, with $15 billion in damages...
. The Cedar and its tributaries, including the Shell Rock River
Shell Rock River
The Shell Rock River is a tributary of the Cedar River in southern Minnesota and northern Iowa in the United States. Via the Cedar and Iowa rivers, it is part of the watershed of the Mississippi River. The United States Board on Geographic Names settled on "Shell Rock River" as the stream's name...
, can contribute to flooding events.
The source of this article is wikipedia, the free encyclopedia.  The text of this article is licensed under the GFDL.