A panfish, also spelled pan-fish or pan fish, is an edible game fish
Game fish
Game fish are fish pursued for sport by recreational anglers. They can be freshwater or marine fish. Game fish can be eaten after being caught, though increasingly anglers practise catch and release to improve fish populations. Some game fish are also targeted commercially, particularly...
that usually doesn't outgrow the size of a frying pan. The term is also commonly used by anglers to refer to any small catch that will fit in a pan, but is large enough to be legal. However its definition and usage varies with geographical region. According to the Oxford English Dictionary
Oxford English Dictionary
The Oxford English Dictionary , published by the Oxford University Press, is the self-styled premier dictionary of the English language. Two fully bound print editions of the OED have been published under its current name, in 1928 and 1989. The first edition was published in twelve volumes , and...
, the term was first recorded in 1796 in American Cookery
American Cookery
American Cookery, by Amelia Simmons, was the first known cookbook written by an American, published in 1796. Until this time, the cookbooks printed and used in what became the United States were British cookbooks, so the importance of this book is obvious to American culinary history, and more...
, the first known cookbook written by an American
United States
The United States of America is a federal constitutional republic comprising fifty states and a federal district...
. 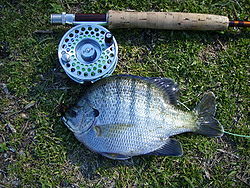 The term panfish or pan-fish has been used to refer to a wide range of edible freshwater and saltwater fish species that are small enough to cook in a small pan. In American Food and Game Fishes. A Popular Account of All The Species Found In America North Of The Equator, With Keys For Ready Identification, Life Histories And Methods of Capture – Jordan and Evermann (1908) they identify all the following as panfish in some form or another: Yellow Perch, Candlefish, Balaos, Sand Launces, Rock Bass
Rock bass
The rock bass , also known as the rock perch, goggle-eye, or red eye is a species of freshwater fish in the sunfish family of order Perciformes. They are similar in appearance to smallmouth bass but are usually quite a bit smaller...
, Bullheads, Minnows, Rocky Mountain Whitefish, Sand Rollers, Crappie, Yellow Bass, White Bass, Croaker and of course most of the common small sunfishes such as bluegill and redear sunfish.

Here’s but one example:

As a pan-fish we do not know of any better among American freshwater fishes. We have experimented with the yellow perch and several other species, including both species of black bass, the bluegill, wall-eyed pike, and rock-bass, eating each for several days in succession, and found the yellow perch the sweetest and most delicious of them all. One does not tire of it so soon as of the other kinds. Several other persons who tried the same experiment reached the same conclusion. In most parts of its range it is highly esteemed, and in many places it is of very considerable commercial importance. In the Great Lakes, the Potomac River, and the small lakes in the upper Mississippi Valley large quantities are taken, which always find a ready sale.

The following is a typical example of the term as it was commonly used in cooking taken from The White House Cookbook compiled by Hugo Ziemann, chief kitchen steward in the White House
White House
The White House is the official residence and principal workplace of the president of the United States. Located at 1600 Pennsylvania Avenue NW in Washington, D.C., the house was designed by Irish-born James Hoban, and built between 1792 and 1800 of white-painted Aquia sandstone in the Neoclassical...
in 1901:

TO FRY FISH - Most of the smaller fish (generally termed pan-fish) are usually fried. Clean well, cut off the head, and, if quite large, cut out the backbone, and slice the body crosswise into five or six pieces; season with salt and pepper. Dip in Indian meal or wheat flour, or in beaten egg, and roll in bread or fine cracker crumbs trout and perch should not be dipped in meal; put into a thick bottomed iron frying pan, the flesh side down, with hot lard
or drippings; fry slowly, turning when lightly browned. PAN-FISH.
Place them in a thick bottomed frying pan with heads all one way. Fill
the spaces with smaller fish. When they are fried quite brown and ready
to turn, put a dinner plate over them, drain off the fat; then invert the
pan, and they will be left unbroken on the plate. Put the lard back into
the pan, and when hot slip back the fish. When the other side is brown,
drain, turn on a plate as before, and slip them on a warm platter, to be
sent to the table. Leaving the heads on and the fish a crispy-brown, in
perfect shape, improves the appearance if not the flavor. Garnish with slices of lemon.


In most of today’s angling literature members of the freshwater family Centrarchidae
Centrarchidae
The sunfishes are a family of freshwater ray-finned fish belonging to the order Perciformes. The type genus is Centrarchus . The family's 27 species includes many fishes familiar to North Americans, including the rock bass, largemouth bass, bluegill, pumpkinseed, and crappies...
(also called sunfishes) are the target species most likely to be called panfish. They include:


The term panfish may also be used for members of other families, such as: