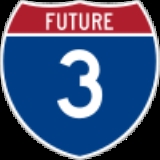 Encyclopedia
Interstate 3 the Third Infantry Division Highway, is a proposed Interstate Highway in the United States to run from Savannah, Georgia
Savannah, Georgia
Savannah is the largest city and the county seat of Chatham County, in the U.S. state of Georgia. Established in 1733, the city of Savannah was the colonial capital of the Province of Georgia and later the first state capital of Georgia. Today Savannah is an industrial center and an important...
, north to Augusta, Georgia
Augusta, Georgia
Augusta is a consolidated city in the U.S. state of Georgia, located along the Savannah River. As of the 2010 census, the Augusta–Richmond County population was 195,844 not counting the unconsolidated cities of Hephzibah and Blythe.Augusta is the principal city of the Augusta-Richmond County...
, and Knoxville, Tennessee
Knoxville, Tennessee
Founded in 1786, Knoxville is the third-largest city in the U.S. state of Tennessee, U.S.A., behind Memphis and Nashville, and is the county seat of Knox County. It is the largest city in East Tennessee, and the second-largest city in the Appalachia region...
. The roadway was proposed in the same federal highway measure that gave birth to a proposal for Interstate 14
Interstate 14
Interstate 14 is a proposed interstate set to run from Natchez, Mississippi or Alexandria, Louisiana to Augusta, Georgia or North Augusta, South Carolina named for the 14th Amendment to the U.S. Constitution...
.

The proposed numbering of the highway does not fit within the existing Interstate Highway grid, but was noted to salute and honor the Third Infantry Division of the United States Army, based at Fort Stewart
Fort Stewart
Fort Stewart is a census-designated place and U.S. Army post primarily in Liberty County and Bryan County, but also extending into smaller portions of Evans, Long, and Tattnall Counties in Georgia, USA. The population was 11,205 at the 2000 census...
, Georgia.

The Savannah River Parkway begins just northwest of Savannah at the intersection of Interstate 95
Interstate 95 in Georgia
Interstate 95, the main Interstate Highway on the east coast of the United States, serves the Atlantic coast of Georgia. It begins at the St. Marys River at the Florida state line north of Jacksonville and heads north past the border of South Carolina at the Savannah River...
and State Route 21. It goes northwesterly along Georgia 21, paralleling the Savannah River
Savannah River
The Savannah River is a major river in the southeastern United States, forming most of the border between the states of South Carolina and Georgia. Two tributaries of the Savannah, the Tugaloo River and the Chattooga River, form the northernmost part of the border...
, to Millen
Millen, Georgia
Millen is a city in Jenkins County, Georgia, United States. The population was 3,492 at the 2000 census, a decline of 8.3% since 1990, during a decade in which the state's population grew by 26.4%.The city, centered near the intersection of U.S...
, where it meets U.S. 25
U.S. Route 25
U.S. Route 25 is a north–south United States highway that runs for from Brunswick, Georgia to the Ohio state line in Covington, Kentucky.-Georgia:...
. From Millen, the roadway follows U.S. 25 to Interstate 520
Interstate 520
Interstate 520 is a auxiliary Interstate Highway that encircles Augusta, Georgia and North Augusta, South Carolina as a three quarter beltway around the western, southern and eastern parts of the Augusta area. It begins at Interstate 20 in the northwest part of Augusta, and ends at Interstate 20...
in Augusta. A western branch of the Savannah River Parkway runs from Interstate 16
Interstate 16
Interstate 16 , also known as Jim Gillis Historic Savannah Parkway or State Route 404 , is an intrastate Interstate Highway located entirely within the state of Georgia, United States...
south of Statesboro
Statesboro, Georgia
Statesboro is a city in southeast Georgia, United States, and is the county seat and most populous city of Bulloch County. Statesboro has a population of 28,422 and the Statesboro, GA Micropolitan Statistical Area had a population of 70,217...
north and northwestward (following U.S. 25) to meet the main parkway roadway in Millen.

The proposal faces local opposition from groups concerned about the environmental impact of the Interstate Highway. No date for construction of the highway has been set. In July 2010, the federal government began a study of the proposed route.

Due to the difficulties of building a new highway through the Appalachian mountains, the route north of Augusta is less clear. In early 2008, officials introduced the possibility of routing I-3 through Greenwood, South Carolina
Greenwood, South Carolina
Greenwood is a city in and the county seat of Greenwood County, South Carolina, United States. The population was 22,071 at the 2000 census and had slightly increased to 22,710 according to a 2009 estimate.-Geography:...
and continuing on to Greenville
Greenville, South Carolina
-Law and government:The city of Greenville adopted the Council-Manager form of municipal government in 1976.-History:The area was part of the Cherokee Nation's protected grounds after the Treaty of 1763, which ended the French and Indian War. No White man was allowed to enter, though some families...
. Other potential routes continue in Georgia along U.S. 441, U.S. 129 (along the Dragon
Deals Gap, North Carolina
Deals Gap is a portion of U.S. Route 129 in Blount County, Tennessee, which also lends its name to a small unincorporated community and motorcycle resort situated in a gap in Swain County, North Carolina, United States. It is located along U.S. 129 at the Tennessee state line. The community has an...
, an eleven-mile stretch of road with 318 curves), or Georgia State Route 77
Georgia State Route 77
State Route 77 is a Georgia state controlled highway that runs primarily in eastern Georgia. The highway connects the cities of Elberton and Hartwell with Interstate 85 and Interstate 20....
.