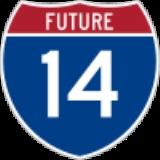 Encyclopedia
Interstate 14 is a proposed interstate set to run from Natchez, Mississippi
Natchez, Mississippi
Natchez is the county seat of Adams County, Mississippi, United States. With a total population of 18,464 , it is the largest community and the only incorporated municipality within Adams County...
or Alexandria, Louisiana
Alexandria, Louisiana
Alexandria is a city in and the parish seat of Rapides Parish, Louisiana, United States. It lies on the south bank of the Red River in almost the exact geographic center of the state. It is the principal city of the Alexandria metropolitan area which encompasses all of Rapides and Grant parishes....
to Augusta, Georgia
Augusta, Georgia
Augusta is a consolidated city in the U.S. state of Georgia, located along the Savannah River. As of the 2010 census, the Augusta–Richmond County population was 195,844 not counting the unconsolidated cities of Hephzibah and Blythe.Augusta is the principal city of the Augusta-Richmond County...
or North Augusta, South Carolina
North Augusta, South Carolina
North Augusta is a city in Aiken County, South Carolina, United States, on the north bank of the Savannah River. The population was 21,348 at the 2010 census. The city is included in the Central Savannah River Area and is also part of the Augusta, Georgia metropolitan area.- History :North...
named for the 14th Amendment
Fourteenth Amendment to the United States Constitution
The Fourteenth Amendment to the United States Constitution was adopted on July 9, 1868, as one of the Reconstruction Amendments.Its Citizenship Clause provides a broad definition of citizenship that overruled the Dred Scott v...
to the U.S. Constitution. The proposal for I-14 has its origins in the same federal legislation tied to Interstate 3
Interstate 3
Interstate 3 , the Third Infantry Division Highway, is a proposed Interstate Highway in the United States to run from Savannah, Georgia, north to Augusta, Georgia, and Knoxville, Tennessee...
, which is proposed to run from Savannah, GA
Savannah, Georgia
Savannah is the largest city and the county seat of Chatham County, in the U.S. state of Georgia. Established in 1733, the city of Savannah was the colonial capital of the Province of Georgia and later the first state capital of Georgia. Today Savannah is an industrial center and an important...
to Knoxville, TN
Knoxville, Tennessee
Founded in 1786, Knoxville is the third-largest city in the U.S. state of Tennessee, U.S.A., behind Memphis and Nashville, and is the county seat of Knox County. It is the largest city in East Tennessee, and the second-largest city in the Appalachia region...
.

The actual final route of I-14 is unknown. But the 2005 SAFETEA-LU legislation indicated that in Georgia, I-14 would follow the existing Fall Line Freeway
Fall Line Freeway
The Fall Line Freeway is a highway currently being constructed that will run the width of the state of Georgia from Columbus to Augusta, passing through several cities including Macon and Milledgeville. It will be designated State Route 540 upon completion, and it will be a four-lane divided...
, which runs from Augusta
Augusta, Georgia
Augusta is a consolidated city in the U.S. state of Georgia, located along the Savannah River. As of the 2010 census, the Augusta–Richmond County population was 195,844 not counting the unconsolidated cities of Hephzibah and Blythe.Augusta is the principal city of the Augusta-Richmond County...
to Columbus
Columbus, Georgia
Columbus is a city in and the county seat of Muscogee County, Georgia, United States, with which it is consolidated. As of the 2010 census, the city had a population of 189,885. It is the principal city of the Columbus, Georgia metropolitan area, which, in 2009, had an estimated population of 292,795...
, by way of Macon
Macon, Georgia
Macon is a city located in central Georgia, US. Founded at the fall line of the Ocmulgee River, it is part of the Macon metropolitan area, and the county seat of Bibb County. A small portion of the city extends into Jones County. Macon is the biggest city in central Georgia...
and Milledgeville
Milledgeville, Georgia
Milledgeville is a city in and the county seat of Baldwin County in the U.S. state of Georgia. It is northeast of Macon, located just before Eatonton on the way to Athens along U.S. Highway 441, and it is located on the Oconee River. The relatively rapid current of the Oconee here made this an...
. The present Fall Line Freeway roadway, which is presently under construction, is signed in Georgia as State Route 540.

The Fall Line Freeway highway in Georgia, which, as of June 2010 is 83 percent complete, follows U.S. 80 from Columbus eastward to Geneva
Geneva, Georgia
Geneva is a town in Talbot County, Georgia, United States. The population was 114 at the 2000 census.-Geography:Geneva is located at .According to the United States Census Bureau, the town has a total area of , all of it land....
, Georgia 96 from there to Fort Valley
Fort Valley, Georgia
Fort Valley is a city in and the county seat of Peach County, Georgia, United States. As of the 2010 census, the city had a population of 9,815.Fort Valley is the corporate headquarters of the Blue Bird Corporation, a large manufacturer of buses...
, and Georgia 49 Connector and Georgia 49
Georgia State Route 49
State Route 49 is a north–south state route located in the central part of the U.S. state of Georgia. The route travels from State Route 45 north of Dawson to State Route 22/State Route 24 and State Route 112 in Milledgeville.-Route description:...
to Byron
Byron, Georgia
Byron is a city in Peach County, Georgia, United States. A small portion of the city extends into Houston County. The population was 2,887 at the 2000 census...
, where it joins Interstate 75
Interstate 75
Interstate 75 is a major north–south Interstate Highway in the Great Lakes and Southeastern regions of the United States. It travels from State Road 826 and State Road 924 in Hialeah, Florida to Sault Ste. Marie, Michigan, at the Ontario, Canada, border...
. It follows I-75 to Macon, then proceeds east along or near Georgia 57 as far as the Wilkinson County
Wilkinson County, Georgia
Wilkinson County is a county located in the U.S. state of Georgia. It was created on May 11, 1803. As of 2000, the population was 10,220. The 2007 Census Estimate shows a population of 10,064...
line. The Fall Line Freeway then proceeds northeastward mostly on new roadway until it reaches Georgia 24 just southeast of Milledgeville, and it then follows S.R. 24, State Route 88, and U.S. 1 to Augusta, ending at Interstate 520
Interstate 520
Interstate 520 is a auxiliary Interstate Highway that encircles Augusta, Georgia and North Augusta, South Carolina as a three quarter beltway around the western, southern and eastern parts of the Augusta area. It begins at Interstate 20 in the northwest part of Augusta, and ends at Interstate 20...
. Contrary to the road's name, it is not a controlled-access highway
Controlled-access highway
A controlled-access highway is a highway designed exclusively for high-speed vehicular traffic, with all traffic flow and ingress/egress regulated...
.