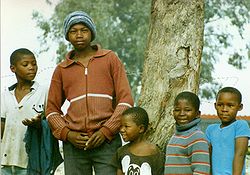 International isolation is often the result of international sanctions
International sanctions
International sanctions are actions taken by countries against others for political reasons, either unilaterally or multilaterally.There are several types of sanctions....
against a specific country (or group of countries), but it may also be a result of a policy of isolationism
Isolationism
Isolationism is the policy or doctrine of isolating one's country from the affairs of other nations by declining to enter into alliances, foreign economic commitments, international agreements, etc., seeking to devote the entire efforts of one's country to its own advancement and remain at peace by...
by the country in question.
Libya
Libya
Libya is an African country in the Maghreb region of North Africa bordered by the Mediterranean Sea to the north, Egypt to the east, Sudan to the southeast, Chad and Niger to the south, and Algeria and Tunisia to the west....
under Muammar Gaddafi
Muammar Gaddafi
Muammar Muhammad Abu Minyar Gaddafi or "September 1942" 20 October 2011), commonly known as Muammar Gaddafi or Colonel Gaddafi, was the official ruler of the Libyan Arab Republic from 1969 to 1977 and then the "Brother Leader" of the Libyan Arab Jamahiriya from 1977 to 2011.He seized power in a...
, for example, ended up in a state of international isolation after decades of confrontation with the West and its critical politics against fellow Arab governments.

Countries which have seceded
Secession
Secession is the act of withdrawing from an organization, union, or especially a political entity. Threats of secession also can be a strategy for achieving more limited goals.-Secession theory:...
from another state may find themselves under international isolation, like Abkhazia
Abkhazia
Abkhazia is a disputed political entity on the eastern coast of the Black Sea and the south-western flank of the Caucasus.Abkhazia considers itself an independent state, called the Republic of Abkhazia or Apsny...
, which is only recognized by a handful of countries after breaking away from Georgia
Georgia (country)
Georgia is a sovereign state in the Caucasus region of Eurasia. Located at the crossroads of Western Asia and Eastern Europe, it is bounded to the west by the Black Sea, to the north by Russia, to the southwest by Turkey, to the south by Armenia, and to the southeast by Azerbaijan. The capital of...
with the help of the Russia
Russia
Russia or , officially known as both Russia and the Russian Federation , is a country in northern Eurasia. It is a federal semi-presidential republic, comprising 83 federal subjects...
n military. Northern Cyprus, the northern section of the island of Cyprus
Cyprus
Cyprus , officially the Republic of Cyprus , is a Eurasian island country, member of the European Union, in the Eastern Mediterranean, east of Greece, south of Turkey, west of Syria and north of Egypt. It is the third largest island in the Mediterranean Sea.The earliest known human activity on the...
, finds itself in a similar situation. Usually such states and their interests are protected by a larger neighbour.

Certain widely acknowledged terms or concepts, like "Pariah state
Pariah state
A pariah state is one whose conduct is considered to be out of line with international norms of behavior. This term is closely related to the term rogue state.-Definitions:...
", have been coined to refer to countries that have isolated themselves internationally or have been isolated by sizeable groups of nations. The characteristics of such a state are "...precarious diplomatic isolation, the absence of assured, credible security support or political moorings within big-power alliance structures, and ... [being] the targets of obsessive and unrelenting opprobrium and censure within international forums such as the United Nations." One such a State would be the People's Republic of Kampuchea
People's Republic of Kampuchea
The People's Republic of Kampuchea , , was founded in Cambodia by the Salvation Front, a group of Cambodian leftists dissatisfied with the Khmer Rouge, after the overthrow of Democratic Kampuchea, Pol Pot's government...
after 1979, when both the People's Republic of China
People's Republic of China
China , officially the People's Republic of China , is the most populous country in the world, with over 1.3 billion citizens. Located in East Asia, the country covers approximately 9.6 million square kilometres...
and the United States
United States
The United States of America is a federal constitutional republic comprising fifty states and a federal district...
pushed for its isolation in the international arena, after not having approved of the Vietnamese invasion to ouster the Khmer Rouge.

The concept "falling off the map" was used by political writer V. S. Naipaul
V. S. Naipaul
Sir Vidiadhar Surajprasad "V. S." Naipaul, TC is a Nobel prize-winning Indo-Trinidadian-British writer who is known for his novels focusing on the legacy of the British Empire's colonialism...
in reference to the growing international isolation of the Islamic Republic of Iran after being in the limelight during the times of Shah
Shah
Shāh is the title of the ruler of certain Southwest Asian and Central Asian countries, especially Persia , and derives from the Persian word shah, meaning "king".-History:...
Rezā Pahlavi and during the first years of the Revolution
Iranian Revolution
The Iranian Revolution refers to events involving the overthrow of Iran's monarchy under Shah Mohammad Reza Pahlavi and its replacement with an Islamic republic under Ayatollah Ruhollah Khomeini, the leader of the...
.

One of the most famous examples in history was the international isolation of South Africa
South Africa
The Republic of South Africa is a country in southern Africa. Located at the southern tip of Africa, it is divided into nine provinces, with of coastline on the Atlantic and Indian oceans...
during the Apartheid years.
While poverty
Poverty
Poverty is the lack of a certain amount of material possessions or money. Absolute poverty or destitution is inability to afford basic human needs, which commonly includes clean and fresh water, nutrition, health care, education, clothing and shelter. About 1.7 billion people are estimated to live...
is usually one of the results of international isolation, the elite in the Republic of South Africa was able to maintain its status and wealth, the most economically disadvantaged classes bearing the brunt of the situation.