Encyclopedia
Intersky Luftfahrt GmbH
Gesellschaft mit beschränkter Haftung
Gesellschaft mit beschränkter Haftung is a type of legal entityvery common in Germany, Austria, Switzerland, and other Central European countries...
(stylized as InterSky) is an airline headquartered in Bregenz
Bregenz
-Culture:The annual summer music festival Bregenzer Festspiele is a world-famous festival which takes place on and around a stage on Lake Constance, where a different opera is performed every second year.-Sport:* A1 Bregenz HB is a handball team....
, Austria
Austria
Austria , officially the Republic of Austria , is a landlocked country of roughly 8.4 million people in Central Europe. It is bordered by the Czech Republic and Germany to the north, Slovakia and Hungary to the east, Slovenia and Italy to the south, and Switzerland and Liechtenstein to the...
, operating scheduled services from its base at Friedrichshafen Airport, Germany
Germany
Germany , officially the Federal Republic of Germany , is a federal parliamentary republic in Europe. The country consists of 16 states while the capital and largest city is Berlin. Germany covers an area of 357,021 km2 and has a largely temperate seasonal climate...
, to major cities in Germany, Austria and Switzerland
Switzerland
Switzerland name of one of the Swiss cantons. ; ; ; or ), in its full name the Swiss Confederation , is a federal republic consisting of 26 cantons, with Bern as the seat of the federal authorities. The country is situated in Western Europe,Or Central Europe depending on the definition....
, as well as seasonal holiday flights to the Mediterranean.

Intersky was established in November 2001 and started operations on 25 March 2002. At that time the company was owned by Renate Moser (50%), then first female airline CEO
Chief executive officer
A chief executive officer , managing director , Executive Director for non-profit organizations, or chief executive is the highest-ranking corporate officer or administrator in charge of total management of an organization...
, Rolf Seewald (35%), the founder and owner of Rheintalflug, and other shareholders (15%). As of 2010, the airline has 110 employees and is led by Claus Bernatzik, a former Rheintalflug and Eurowings
Eurowings
Eurowings Luftverkehrs AG, part of Lufthansa Regional, is an airline with its head office in the Düsseldorf Administrative Center in Düsseldorf, Germany...
Manager. 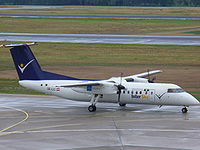 As of December 2010, the InterSky fleet consists of four Bombardier Dash 8 Q300 turboprop
Turboprop
A turboprop engine is a type of turbine engine which drives an aircraft propeller using a reduction gear.The gas turbine is designed specifically for this application, with almost all of its output being used to drive the propeller...
aircraft with an average age of 12.2 years, which are all equipped with 50 passenger seats in an all-economy class
Economy class
__FORCETOC__Economy class, also called coach class , steerage, or standard class, is the lowest class of seating in air travel, rail travel, and sometimes ferry or maritime travel....
cabin layout.