Encyclopedia
In computing
Computing
Computing is usually defined as the activity of using and improving computer hardware and software. It is the computer-specific part of information technology...
, an input device is any peripheral
Peripheral
A peripheral is a device attached to a host computer, but not part of it, and is more or less dependent on the host. It expands the host's capabilities, but does not form part of the core computer architecture....
(piece of computer hardware
Computer hardware
Personal computer hardware are component devices which are typically installed into or peripheral to a computer case to create a personal computer upon which system software is installed including a firmware interface such as a BIOS and an operating system which supports application software that...
equipment) used to provide data and control signals to an information processing system such as a computer
Computer
A computer is a programmable machine designed to sequentially and automatically carry out a sequence of arithmetic or logical operations. The particular sequence of operations can be changed readily, allowing the computer to solve more than one kind of problem...
or other information appliance
Information appliance
In general terms, an information appliance or information device is any machine or device that is usable for the purposes of computing, telecommunicating, reproducing, and presenting encoded information in myriad forms and applications....
. Input and output device
Output device
An output device is any piece of computer hardware equipment used to communicate the results of data processing carried out by an information processing system to the outside world....
s make up the hardware interface between a computer and a scanner
Image scanner
In computing, an image scanner—often abbreviated to just scanner—is a device that optically scans images, printed text, handwriting, or an object, and converts it to a digital image. Common examples found in offices are variations of the desktop scanner where the document is placed on a glass...
or 6DOF
Six degrees of freedom
Six degrees of freedom refers to motion of a rigid body in three-dimensional space, namely the ability to move forward/backward, up/down, left/right combined with rotation about three perpendicular axes...
controller.

Many input devices can be classified according to:


Pointing devices, which are input devices used to specify a position in space, can further be classified according to:


Direct input is almost necessarily absolute, but indirect input may be either absolute or relative. For example, digitizing graphics tablet
Graphics tablet
A graphics tablet is a computer input device that enables a user to hand-draw images and graphics, similar to the way a person draws images with a pencil and paper. These tablets may also be used to capture data or handwritten signatures...
s that do not have an embedded screen involve indirect input and sense absolute positions and are often run in an absolute input mode, but they may also be set up to simulate a relative input mode where the stylus or puck can be lifted and repositioned.


A 'keyboard' is a human interface device
Human interface device
A human interface device or HID is a type of computer device that interacts directly with, and most often takes input from, humans and may deliver output to humans. The term "HID" most commonly refers to the USB-HID specification. The term was coined by Mike Van Flandern of Microsoft when he...
which is represented as a layout of buttons. Each button, or key, can be used to either input a linguistic character to a computer, or to call upon a particular function of the computer. Traditional keyboards use spring-based buttons, though newer variations employ virtual keys
Virtual keyboard
A virtual keyboard is a software component that allows a user to enter characters. A virtual keyboard can usually be operated with multiple input devices, which may include a touchscreen, an actual keyboard and a computer mouse.- Types :...
, or even projected keyboards
Projection keyboard
A projection keyboard is a form of computer input device whereby the image of a virtual keyboard is projected onto surface: when a user's fingers are placed on the projected "keys", the device translates them into keystrokes.- History :...
.

Examples of types of keyboards include:

A pointing device is any human interface device that allows a user to input spatial data to a computer. In the case of mice and touch screens, this is usually achieved by detecting movement across a physical surface. Analog devices, such as 3D mice, joystick
Joystick
A joystick is an input device consisting of a stick that pivots on a base and reports its angle or direction to the device it is controlling. Joysticks, also known as 'control columns', are the principal control in the cockpit of many civilian and military aircraft, either as a center stick or...
s, or pointing stick
Pointing stick
The pointing stick is an isometric joystick used as a pointing device . It was invented by research scientist Ted Selker...
s, function by reporting their angle of deflection. Movements of the pointing device are echoed on the screen by movements of the cursor
Cursor (computers)
In computing, a cursor is an indicator used to show the position on a computer monitor or other display device that will respond to input from a text input or pointing device. The flashing text cursor may be referred to as a caret in some cases...
, creating a simple, intuitive way to navigate a computer's GUI.

Some devices allow many continuous degrees of freedom as input. These can be used as pointing devices, but are generally used in ways that don't involve pointing to a location in space, such as the control of a camera angle while in 3D applications. These kinds of devices are typically used in CAVEs
Cave Automatic Virtual Environment
A Cave Automatic Virtual Environment is an immersive virtual reality environment where projectors are directed to three, four, five or six of the walls of a room-sized cube...
, where input that registers 6DOF is required. 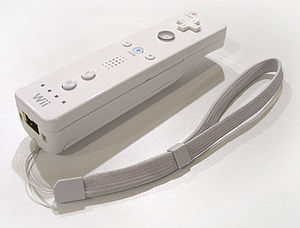 Input devices, such as buttons and joysticks, can be combined on a single physical device that could be thought of as a composite device. Many gaming devices have controllers like this. Technically mice are composite devices, as they both track movement and provide buttons for clicking, but composite devices are generally considered to have more than two different forms of input.

Video input devices are used to digitize images or video from the outside world into the computer. The information can be stored in a multitude of formats depending on the user's requirement.

In the fashion of video devices, audio devices are used to either capture or create sound. In some cases, an audio output device can be used as an input device, in order to capture produced sound.