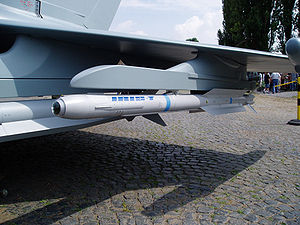 The infrared sensor package on the tip or head of a heat-seeking missile is known as the seeker head.

The NATO brevity code
Brevity code
Multiservice tactical brevity codes are codes used by various military forces. The codes procedure words, a type of voice procedure, are designed to convey complex information with a few words.-American/NATO codes:...
for an air-to-air
Air-to-air missile
An air-to-air missile is a missile fired from an aircraft for the purpose of destroying another aircraft. AAMs are typically powered by one or more rocket motors, usually solid fuelled but sometimes liquid fuelled...
infrared-guided missile launch is "Fox Two".

Over the past 25 years, 90% of all United States air combat losses have been due to infrared homing missiles.

The three main materials used in the infrared sensor are lead(II) sulfide
Lead(II) sulfide
Lead sulfide is an inorganic compound with the formula Pb. It finds limited use in electronic devices. PbS, also known as galena, is the principal ore and most important compound of lead....
(PbS), indium antimonide (InSb) and mercury cadmium telluride (HgCdTe). Older sensors tend to use PbS, newer sensors tend to use InSb or HgCdTe. All perform better when cooled, as they are both more sensitive and able to detect cooler objects.

Early infrared seekers were most effective in detecting infrared radiation with shorter wavelengths, such as the 4.2 micrometre emissions of the carbon dioxide
Carbon dioxide
Carbon dioxide is a naturally occurring chemical compound composed of two oxygen atoms covalently bonded to a single carbon atom...
efflux of a jet engine
Jet engine
A jet engine is a reaction engine that discharges a fast moving jet to generate thrust by jet propulsion and in accordance with Newton's laws of motion. This broad definition of jet engines includes turbojets, turbofans, rockets, ramjets, pulse jets...
. Such seekers, which are most sensitive to the 3 to 5 micrometre range, are now called single-color seekers. Modern infrared seekers also operate in the 8 to 13 micrometre wavelength
Wavelength
In physics, the wavelength of a sinusoidal wave is the spatial period of the wave—the distance over which the wave's shape repeats.It is usually determined by considering the distance between consecutive corresponding points of the same phase, such as crests, troughs, or zero crossings, and is a...
range, which is absorbed least by the atmosphere. Such seekers are called two-color systems. Two-color seekers are harder to defeat with countermeasure
Countermeasure
A countermeasure is a measure or action taken to counter or offset another one. As a general concept it implies precision, and is any technological or tactical solution or system designed to prevent an undesirable outcome in the process...
s such as flares
Flare (countermeasure)
A flare is an aerial infrared countermeasure to counter an infrared homing surface-to-air missile or air-to-air missile. Flares are commonly composed of a pyrotechnic composition based on magnesium or another hot-burning metal, with burning temperature equal to or hotter than engine exhaust...
.

A missile's resistance to decoy
Decoy
A decoy is usually a person, device or event meant as a distraction, to conceal what an individual or a group might be looking for. Decoys have been used for centuries most notably in game hunting, but also in wartime and in the committing or resolving of crimes.-Duck decoy:The term duck decoy may...
s can also be determined by the method in which the space in front of itself is scanned for targets. Early missiles used spin scanning while newer seekers use conical scanning which gives them superior decoy discrimination as well as overall increased sensitivity for longer range tracking. There have also been missiles built using so-called "rosette" scanning methods. Very modern heat-seeking missiles utilise imaging infrared (IIR), where the IR/UV sensor is a focal plane array which is able to "see" in infra-red, much like the CCD in a digital camera. This requires much more signal processing but can be much more accurate and harder to fool with decoys. In addition to being more flare-resistant, newer seekers are also less likely to be fooled into locking onto the sun, another common trick for avoiding heat-seeking missiles.

All-aspect
All-aspect
An all-aspect missile is one which is able to track a target no matter which way the target faces relative to the missile. In other words, an all-aspect missile can be launched against a target in a tail-chase engagement, in a head-on engagement, in a side-on engagement, from above, from below,...
seekers also tend to require cooling to give them the high degree of sensitivity required to lock onto the lower level signals coming from the front and sides of an aircraft. Background heat from inside the sensor, or the aerodynamically heated sensor window, can overpower the weak signal entering the sensor from the target. (CCDs in cameras have similar problems; they have much more "noise" at higher temperatures.) Modern all-aspect missiles like the AIM-9M Sidewinder and FIM-92 Stinger
FIM-92 Stinger
The FIM-92 Stinger is a personal portable infrared homing surface-to-air missile , which can be adapted to fire from ground vehicles and helicopters , developed in the United States and entered into service in 1981. Used by the militaries of the U.S...
use compressed gas
Joule-Thomson effect
In thermodynamics, the Joule–Thomson effect or Joule–Kelvin effect or Kelvin–Joule effect describes the temperature change of a gas or liquid when it is forced through a valve or porous plug while kept insulated so that no heat is exchanged with the environment. This procedure is called a...
or liquid nitrogen
Liquid nitrogen
Liquid nitrogen is nitrogen in a liquid state at a very low temperature. It is produced industrially by fractional distillation of liquid air. Liquid nitrogen is a colourless clear liquid with density of 0.807 g/mL at its boiling point and a dielectric constant of 1.4...
to cool their sensors in order to lock onto the target at longer ranges and all aspects. (Some such as the AIM-9J and early-model R-60
Molniya R-60
The Molniya R-60 is a lightweight air-to-air missile designed for use by Soviet fighter aircraft. It has been widely exported, and remains in service with the CIS and many other nations....
used a peltier
Thermoelectric effect
The thermoelectric effect is the direct conversion of temperature differences to electric voltage and vice-versa. A thermoelectric device creates a voltage when there is a different temperature on each side. Conversely, when a voltage is applied to it, it creates a temperature difference...
thermoelectric cooler
Thermoelectric cooling
Thermoelectric cooling uses the Peltier effect to create a heat flux between the junction of two different types of materials. A Peltier cooler, heater, or thermoelectric heat pump is a solid-state active heat pump which transfers heat from one side of the device to the other side against the...
).

Most infrared guided missiles have their seekers mounted on a gimbal
Gimbal
A gimbal is a pivoted support that allows the rotation of an object about a single axis. A set of two gimbals, one mounted on the other with pivot axes orthogonal, may be used to allow an object mounted on the innermost gimbal to remain immobile regardless of the motion of its support...
. This allows the sensor to be pointed at the target when the missile is not. This is important for two main reasons. One is that before and during launch, the missile cannot always be pointed at the target. Rather, the pilot or operator points the seeker at the target using radar
Radar
Radar is an object-detection system which uses radio waves to determine the range, altitude, direction, or speed of objects. It can be used to detect aircraft, ships, spacecraft, guided missiles, motor vehicles, weather formations, and terrain. The radar dish or antenna transmits pulses of radio...
, a helmet-mounted sight, an optical sight or possibly by pointing the nose of the aircraft or missile launcher directly at the target. Once the seeker sees and recognises the target, it indicates this to the operator who then typically "uncages" the seeker (which is allowed to follow the target). After this point the seeker remains locked on the target, even if the aircraft or launching platform moves. When the weapon is launched, it may not be able to control the direction it points until the motor fires and it reaches a high enough speed for its fins to control its direction of travel. Until then, the gimballed seeker needs to be able to track the target independently.

Finally, even while it is under positive control and on its way to intercept the target, it probably will not be pointing directly at it; unless the target is moving directly toward or away from the launching platform, the shortest path to intercept the target will not be the path taken while pointing straight at it, since it is moving laterally with respect to the missile's view. The original heat-seeking missiles would simply point towards the target and chase it; this was inefficient. Newer missiles are smarter and use the gimballed seeker head combined with what is known as "proportional guidance
Proportional navigation
Proportional navigation is a guidance law used in some form or another by most homing air target missiles. It is based on the fact that two vehicles are on a collision course when their direct Line-of-Sight does not change direction...
" in order to avoid oscillation and to fly an efficient intercept path.