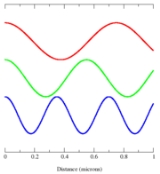 Overview
Electromagnetic radiation (often abbreviated E-M radiation or EMR) is a form of energy
Energy
In physics, energy is an indirectly observed quantity. It is often understood as the ability a physical system has to do work on other physical systems...
that exhibits wave-like behavior as it travels through space. EMR has both electric
Electric field
In physics, an electric field surrounds electrically charged particles and time-varying magnetic fields. The electric field depicts the force exerted on other electrically charged objects by the electrically charged particle the field is surrounding...
and magnetic field
Magnetic field
A magnetic field is a mathematical description of the magnetic influence of electric currents and magnetic materials. The magnetic field at any given point is specified by both a direction and a magnitude ; as such it is a vector field.Technically, a magnetic field is a pseudo vector;...
components, which oscillate in phase perpendicular to each other and perpendicular to the direction of energy propagation
Wave propagation
Wave propagation is any of the ways in which waves travel.With respect to the direction of the oscillation relative to the propagation direction, we can distinguish between longitudinal wave and transverse waves....
.

What type of electromagnetic radiation does an orange flame emit?

How does the "in house" ER from Tv and radios compare to the ER from a cell phone tower 1/2 mile away? Is it worth being concerned about as a health ...
More