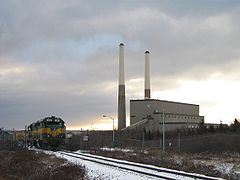 An industrial railway is a type of railway (usually private) that is not available for public transportation and is used exclusively to serve a particular industrial, logistics
Logistics
Logistics is the management of the flow of goods between the point of origin and the point of destination in order to meet the requirements of customers or corporations. Logistics involves the integration of information, transportation, inventory, warehousing, material handling, and packaging, and...
or military site. Industrial railways may be connecting the site to public freight networks through siding
Siding
Siding is the outer covering or cladding of a house meant to shed water and protect from the effects of weather. On a building that uses siding, it may act as a key element in the aesthetic beauty of the structure and directly influence its property value....
s, isolated (sometimes very far away of public rail or surface roads) or located entirely within a served property.

An example of an industrial railway would transport bulk goods, for example clay
Clay
Clay is a general term including many combinations of one or more clay minerals with traces of metal oxides and organic matter. Geologic clay deposits are mostly composed of phyllosilicate minerals containing variable amounts of water trapped in the mineral structure.- Formation :Clay minerals...
from a quarry or coal
Coal
Coal is a combustible black or brownish-black sedimentary rock usually occurring in rock strata in layers or veins called coal beds or coal seams. The harder forms, such as anthracite coal, can be regarded as metamorphic rock because of later exposure to elevated temperature and pressure...
from a mine, to an interchange point, called an exchange siding, with a main line railway, onwards from where it would be transported to its final destination.

The main reasons for industrial railways are normally for one of two reasons:

Resultantly, most industrial railways are short, usually being only a few miles/kilometers long. While these types of lines most often at some point connect via exchange sidings or transfer sidings to bulk mainline shipping railways, there are notable exceptions which are hundreds of miles long, which include the iron ore-carrying railways in Western Australia
Western Australia
Western Australia is a state of Australia, occupying the entire western third of the Australian continent. It is bounded by the Indian Ocean to the north and west, the Great Australian Bight and Indian Ocean to the south, the Northern Territory to the north-east and South Australia to the south-east...
, or in China
China
Chinese civilization may refer to:* China for more general discussion of the country.* Chinese culture* Greater China, the transnational community of ethnic Chinese.* History of China* Sinosphere, the area historically affected by Chinese culture...
to transport coal, while in Canada
Canada
Canada is a North American country consisting of ten provinces and three territories. Located in the northern part of the continent, it extends from the Atlantic Ocean in the east to the Pacific Ocean in the west, and northward into the Arctic Ocean...
there are the Quebec North Shore and Labrador Railway
Quebec North Shore and Labrador Railway
The Quebec North Shore and Labrador Railway is a Canadian regional railway that stretches through the wilderness of northeastern Quebec and western Labrador. It connects Labrador City, Labrador, with the port of Sept-Îles, Quebec, on the north shore of the St. Lawrence River...
and the Cartier Railway
Cartier Railway
The Cartier Railway is a privately owned railway that operates 260 miles of track in the Canadian province of Québec. It is operated by the Cartier Railway Company, a wholly owned subsidiary of Arcelor Mittal, formerly Québec Cartier Mining Company...
. These lines can be thought of as dedicated shipment routes, where only the products of that industry require shipment between those two points, and hence a dedicated line makes more economic sense with only limited possibility of consolidation of shipment with other industries.

Industrial railways serve many different industries. In both Australia
Australia
Australia , officially the Commonwealth of Australia, is a country in the Southern Hemisphere comprising the mainland of the Australian continent, the island of Tasmania, and numerous smaller islands in the Indian and Pacific Oceans. It is the world's sixth-largest country by total area...
and Cuba
Cuba
The Republic of Cuba is an island nation in the Caribbean. The nation of Cuba consists of the main island of Cuba, the Isla de la Juventud, and several archipelagos. Havana is the largest city in Cuba and the country's capital. Santiago de Cuba is the second largest city...
a large number of industrial railways serve the sugarcane
Sugarcane
Sugarcane refers to any of six to 37 species of tall perennial grasses of the genus Saccharum . Native to the warm temperate to tropical regions of South Asia, they have stout, jointed, fibrous stalks that are rich in sugar, and measure two to six metres tall...
industry. In Colorado
Colorado
Colorado is a U.S. state that encompasses much of the Rocky Mountains as well as the northeastern portion of the Colorado Plateau and the western edge of the Great Plains...
, the Coors Brewing Company
Coors Brewing Company
The Coors Brewing Company is a regional division of the world's fifth-largest brewing company, the Canadian Molson Coors Brewing Company and is the third-largest brewer in the United States...
uses its own industrial railway at the brewery both for the delivery of raw materials and for shipping the finished product.

The world's largest industrial railway serves the Baikonur Cosmodrome
Baikonur Cosmodrome
The Baikonur Cosmodrome , also called Tyuratam, is the world's first and largest operational space launch facility. It is located in the desert steppe of Kazakhstan, about east of the Aral Sea, north of the Syr Darya river, near Tyuratam railway station, at 90 meters above sea level...
, and has been long operated by a military rail unit of the Russian Armed Forces. The railway closely participates in space launch
Space launch
Space launch is the earliest part of a flight that reaches space. Space launch involves liftoff, when a rocket or other space launch vehicle leaves the ground at the start of a flight...
es, transporting space vehicles to their immediate launch pad
Launch pad
A launch pad is the area and facilities where rockets or spacecraft lift off. A spaceport can contain one or many launch pads. A typical launch pad consists of the service and umbilical structures. The service structure provides an access platform to inspect the launch vehicle prior to launch....
s.