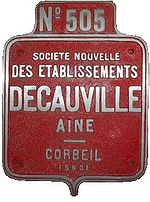 The Decauville manufacturing company was founded by Paul Decauville (1846–1922), a French pioneer in industrial railway
Industrial railway
An industrial railway is a type of railway that is not available for public transportation and is used exclusively to serve a particular industrial, logistics or military site...
s. Decauville's major innovation was the use of ready-made sections of light, narrow gauge track fastened to steel
Steel
Steel is an alloy that consists mostly of iron and has a carbon content between 0.2% and 2.1% by weight, depending on the grade. Carbon is the most common alloying material for iron, but various other alloying elements are used, such as manganese, chromium, vanadium, and tungsten...
sleepers
Railroad tie
A railroad tie/railway tie , or railway sleeper is a rectangular item used to support the rails in railroad tracks...
; this track was portable and could be disassembled and transported very easily. The first Decauville railway used gauge; Decauville later refined his invention and switched to and gauge.

Starting in 1875, his company produced track elements, engines and cars. Those were exported to many countries, in particular to the colonial possessions
Colony
In politics and history, a colony is a territory under the immediate political control of a state. For colonies in antiquity, city-states would often found their own colonies. Some colonies were historically countries, while others were territories without definite statehood from their inception....
of European powers. The French military became interested in the Decauville system as early as 1888 and chose the gauge track to equip its strongholds and to carry artillery pieces
Artillery
Originally applied to any group of infantry primarily armed with projectile weapons, artillery has over time become limited in meaning to refer only to those engines of war that operate by projection of munitions far beyond the range of effect of personal weapons...
and ammunition
Ammunition
Ammunition is a generic term derived from the French language la munition which embraced all material used for war , but which in time came to refer specifically to gunpowder and artillery. The collective term for all types of ammunition is munitions...
during military campaigns. Decauville track was used during the French military expeditions to Madagascar
Madagascar
The Republic of Madagascar is an island country located in the Indian Ocean off the southeastern coast of Africa...
and Morocco
Morocco
Morocco , officially the Kingdom of Morocco , is a country located in North Africa. It has a population of more than 32 million and an area of 710,850 km², and also primarily administers the disputed region of the Western Sahara...
.

By the First World War, the Decauville system had become a military standard and the French and British eventually built thousands of miles of trench railways
Trench railways
Trench Railways represented military adaptation of early 20th century railway technology to the problem of keeping soldiers supplied during the static trench warfare phase of World War I...
track. The Germans had a similar system, with normalized engines.

Decauville tram installations for henequen
Henequen
Henequen is an agave whose leaves yield a fiber also called henequen which is suitable for rope and twine, but not of as high a quality as sisal. Alternative spellings are Henequin and Heniquen. It is the major plantation fiber agave of eastern Mexico, being grown extensively in Yucatán,...
plantations in the Mexican
Mexico
The United Mexican States , commonly known as Mexico , is a federal constitutional republic in North America. It is bordered on the north by the United States; on the south and west by the Pacific Ocean; on the southeast by Guatemala, Belize, and the Caribbean Sea; and on the east by the Gulf of...
region of the Yucatán
Yucatán
Yucatán officially Estado Libre y Soberano de Yucatán is one of the 31 states which, with the Federal District, comprise the 32 Federal Entities of Mexico. It is divided in 106 municipalities and its capital city is Mérida....
, were so extensive (approximately 4,500 kilometers of track) that the system became the de facto
De facto
De facto is a Latin expression that means "concerning fact." In law, it often means "in practice but not necessarily ordained by law" or "in practice or actuality, but not officially established." It is commonly used in contrast to de jure when referring to matters of law, governance, or...
mass transit system for the region. Some ex-hacienda
Hacienda
Hacienda is a Spanish word for an estate. Some haciendas were plantations, mines, or even business factories. Many haciendas combined these productive activities...
s of the area still have small operating, usually burro (donkey) powered, Decauville systems.

A paper read before the Institution of Mechanical Engineers http://www.gutenberg.org/files/11385/11385-h/11385-h.htm#8.
The source of this article is wikipedia, the free encyclopedia.  The text of this article is licensed under the GFDL.