Encyclopedia
Indonesia
Indonesia
Indonesia , officially the Republic of Indonesia , is a country in Southeast Asia and Oceania. Indonesia is an archipelago comprising approximately 13,000 islands. It has 33 provinces with over 238 million people, and is the world's fourth most populous country. Indonesia is a republic, with an...
's first parliamentary general election was held on 29 September 1955. The candidates were seeking to be elected to the 257-seat People's Representative Council
People's Representative Council
The People's Representative Council , sometimes referred to as the House of Representatives, is one of two elected national legislative assemblies in Indonesia....
, which would replace the existing provisional legislature. Despite hopes that the election would bring about political stability, the legislature elected only lasted four years before being dissolved by presidential decree
President Sukarno's 1959 Decree
The Presidential Decree of 5 July 1959 was issued by President Sukarno in the face of the inability of the Constitutional Assembly of Indonesia to achieve the two-thirds majority to reimpose the 1945 Constitution...
.

The first elections were originally planned for January 1946, but because the Indonesian National Revolution
Indonesian National Revolution
The Indonesian National Revolution or Indonesian War of Independence was an armed conflict and diplomatic struggle between Indonesia and the Dutch Empire, and an internal social revolution...
was still underway, this was not possible. After the war, every cabinet had elections in its program. In February 1951 the Natsir cabinet introduced an election bill, but the cabinet fell before it could be debated. The next cabinet, led by Sukiman did hold some regional elections Finally, in February 1952, the Wilopo cabinet introduced a bill for voter registration. Discussions in the People's Representative Council
People's Representative Council
The People's Representative Council , sometimes referred to as the House of Representatives, is one of two elected national legislative assemblies in Indonesia....
did not start until September because of various objections from the political parties. According to Feith, there were three factors. Firstly, legislators were worried about losing their seats; secondly they were worried about a possible swing to Islam
Islam
Islam . The most common are and .   : Arabic pronunciation varies regionally. The first vowel ranges from ~~. The second vowel ranges from ~~~...
ic parties and thirdly an electoral system in accordance with the Provisional Constitution of 1950
Provisional Constitution of 1950
The 1950 Provisional Constitution replaced the Federal Constitution of 1949 when Indonesia unilaterally withdrew from the union with the Netherlands agreed at the Round Table Conference and returned to being a unitary state. It came into force on August 17, 1950...
would mean less representation for regions outside Java
Java
Java is an island of Indonesia. With a population of 135 million , it is the world's most populous island, and one of the most densely populated regions in the world. It is home to 60% of Indonesia's population. The Indonesian capital city, Jakarta, is in west Java...
. Given the fact that cabinets had fallen after introducing controversial measures, there was reluctance to introduce an election bill and there were concerns about possible political conflicts caused by electioneering. However, many political leaders wanted elections as the existing legislature was based on a compromise with Dutch and as such had little popular authority. They also believed elections would bring about greater political stability. The "17 October 1952 affair", when armed soldiers in front of the palace demanded dissolution of the legislature, led to greater demands from all parties for early elections. By 25 November, an elections bill had been submitted to the People's Representative Council. After 18 weeks of debate and 200 proposed amendments, the bill passed on 1 April 1953 and became law on 4 April. It stipulated one member of the legislature for 150,000 residents and gave the right to vote to everybody over the age of 18, or who was or had been married.
Once the bill had passed the cabinet began appointing members of the Central Electoral Committee. This was to have one member from each government party and an independent chairman. However, the Indonesian National Party
Indonesian National Party
The Indonesian National Party is the same used by several political parties in Indonesia from 1927 until the present day.-Pre-independence:...
(PNI) protested that they had no members on the committee, and this dispute was still unresolved when the cabinet fell on 2 June.

On 25 August 1953, the new prime minister, Ali Sastroamidjojo, announced a 16-month schedule for elections starting from January 1954. On 4 November the government announced a new Central Electoral Committee chaired by PNI member S. Hadikusomo and including all the parties represented in the government, namely Nahdatul Ulama
Nahdatul Ulama
Nahdlatul Ulama is a traditionalist Sunni Islam group in Indonesia.The NU was established on January 31, 1926 as a reaction to the modernist Muhammadiyah organization. In 1965, the group took sides with the General Suharto-led army and was heavily involved in the mass killings of Indonesian...
(NU), the Indonesia Islamic Union Party (PSII) the Indonesia People's Party (PRI), the National People's Party (PRN), the Labor Party and the Indoneisan Peasant Front (BTI), as well as the government-supporting Islamic Educators Association (Perti) and the Indonesian Christian Party (Parkindo). 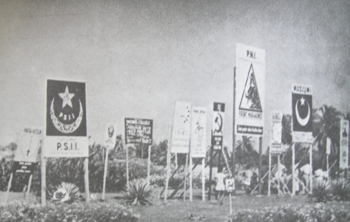 According to Feith, the first phase of the election campaign began on 4 April 1953 when the election bill passed into law, and the second phase when the Central Electoral Committee approved the party symbols on 31 May 1954.

At the time the bill passed into law, the cabinet was a coalition of the Islamic Masjumi and nationalistic PNI. The next two cabinets were coalitions led by one of these parties with the other in opposition. Therefore, the main campaign issue was the debate debate between these two over the role of Islam in the state. Masjumi denied aiming for an Islamic state, while the PNI emphasized their pro-Pancasila stance was not anti-Islam. The two other main Islamic parties, the NU and the PSII supported Masjumi in this debate. A third factor was the Communist Party of Indonesia
Communist Party of Indonesia
The Communist Party of Indonesia was the largest non-ruling communist party in the world prior to being crushed in 1965 and banned the following year.-Forerunners:...
(PKI), which campaigned on issues of poverty and the poor lot of the people due to the continued imperialist nature of cabinet policy. Masjumi tried to draw a clear line between the PKI and other parties, accusing it of being a tool of Moscow.

Party programs were rarely discussed during the campaign. Party symbols with or without slogans were displayed on streets in towns and villages, on private homes, public buildings, buses, trees and calendars. The PKI made extraordinary efforts to promote its symbol, displaying it everywhere to make sure people did not forget it. The PKI campaign was based around social activities such as organizing tool sharing for farmers and building irrigation channels. The party was looking beyond the election to build a permanent basis of support.

In the last few months of the campaign, the major parties focused on educating voters in areas where they had managed to establish village-level organization. This phase included persuasion and threats.

All through September, party leaders were constantly traveling around the country. Daily party newspapers were printed in increasing numbers and given away for free. Articles in dailies these attacked rival parties. In the villages, the emphasis shifted from large rallies to small meetings and house-house canvassing. 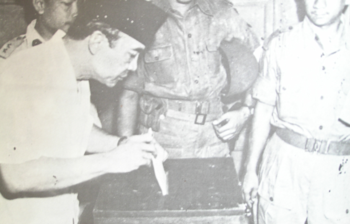 Although in April 1954 the Central Electoral Committee had announced that the election would be held on 29 September the following year, by July and early August, preparations had fallen behind schedule The appointment of members of polling station committees planned to start on 1 August did not begin in many regions until 15 September. In his independence day address on 17 August, President Sukarno
Sukarno
Sukarno, born Kusno Sosrodihardjo was the first President of Indonesia.Sukarno was the leader of his country's struggle for independence from the Netherlands and was Indonesia's first President from 1945 to 1967...
said that anybody putting obstacles in way of elections was a "traitor to the revolution". On 8 September, the information minister said that elections would be held on September 29 except in a few areas where preparations were not complete. Eventually, as a result of "feverish activity", polling station committees were ready on election day.

In the run up to polling day, rumors spread, including a widespread poisoning scare in Java. There was also hoarding of goods. In many parts of country there was a spontaneous and unannounced curfew for several nights before polling day.

On polling day itself, many voters were waiting to cast their ballot by 7 am. The day was peaceful as people realized nothing bad was going to happen. A total of 87.65% of voters cast a valid vote and 91.54% voted. Allowing for deaths between registration and polling, only about 6% did not vote. 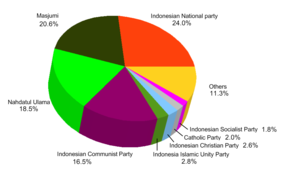 The distribution of votes was uneven across the country. The PNI won 85.97% of its vote in Java, the NU 85.6% and the PKI 88.6%, despite the fact that only 66.2% of the population lived on Java. Conversely only 51.3% of Masjumi's vote came from Java, and it established itself as the leading party for the one third of people living outside Java.

The poor showing of the parties in the cabinet of Prime Minister Burhanuddin Harahap was a major blow. The parties who did better, such as the NU and the PSII were "reluctant" cabinet members with a weak standing. This left the government with the choice of making major concessions to the NU and PSII or seeing them leave the cabinet. With no clear electoral verdict, it was back to inter-party politicking and bargaining. The lack of a clear outcome discredited the existing political system.