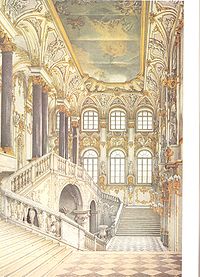 The advantages of an imperial staircase became apparent during the 18th century, when Matthew Brettingham
Matthew Brettingham
Matthew Brettingham , sometimes called Matthew Brettingham the Elder, was an 18th-century Englishman who rose from humble origins to supervise the construction of Holkham Hall, and eventually became one of the country's better-known architects of his generation...
revolutionised the design of the piano nobile
Piano nobile
The piano nobile is the principal floor of a large house, usually built in one of the styles of classical renaissance architecture...
of the London town house. Guests would proceed through a series of reception rooms arranged as a circuit. At large gatherings the two branches could ease the flow of guests arriving and departing, or moving between a ballroom and a supper room on the floor below. An imperial staircase is often used today for similar reasons where two streams of people are moving in opposite directions in buildings as diverse as an opera house
Opera house
An opera house is a theatre building used for opera performances that consists of a stage, an orchestra pit, audience seating, and backstage facilities for costumes and set building...
to a railway station. This use explains why the first single flight is often wider than the following two divided flights, although narrowing flights are also an architectural trick to lengthen perspective in order to increase the impression of size.

An imperial staircase should not be confused with a double staircase, an external feature and common motif seen rising to the entrances of many houses in the Palladian style, such as those at Kedleston Hall
Kedleston Hall
Kedleston Hall is an English country house in Kedleston, Derbyshire, approximately four miles north-west of Derby, and is the seat of the Curzon family whose name originates in Notre-Dame-de-Courson in Normandy...
, Derbyshire. Double staircases as opposed to imperial staircases are more often of just two flights (hence the name) leaving the ground symmetrically to join one common destination occasionally, especially in the architecture of the Sicilian Baroque
Sicilian Baroque
Sicilian Baroque is the distinctive form of Baroque architecture that took hold on the island of Sicily, off the southern coast of Italy, in the 17th and 18th centuries...
they will leave the ground as one flight and then divide but this is less common. On occasions one sees an Imperial staircase in the form of two flights rising to join and then continue as one flight but this is rare.