Encyclopedia
Immunoglobulin G are antibody
Antibody
An antibody, also known as an immunoglobulin, is a large Y-shaped protein used by the immune system to identify and neutralize foreign objects such as bacteria and viruses. The antibody recognizes a unique part of the foreign target, termed an antigen...
molecules. Each IgG is composed of four peptide
Peptide
Peptides are short polymers of amino acid monomers linked by peptide bonds. They are distinguished from proteins on the basis of size, typically containing less than 50 monomer units. The shortest peptides are dipeptides, consisting of two amino acids joined by a single peptide bond...
chains — two heavy chains γ and two light chains. Each IgG has two antigen
Antigen
An antigen is a foreign molecule that, when introduced into the body, triggers the production of an antibody by the immune system. The immune system will then kill or neutralize the antigen that is recognized as a foreign and potentially harmful invader. These invaders can be molecules such as...
binding sites. Other immunoglobulins may be described in terms of polymers with the IgG structure considered the monomer
Monomer
A monomer is an atom or a small molecule that may bind chemically to other monomers to form a polymer; the term "monomeric protein" may also be used to describe one of the proteins making up a multiprotein complex...
.

IgG constitutes 75% of serum
Blood plasma
Blood plasma is the straw-colored liquid component of blood in which the blood cells in whole blood are normally suspended. It makes up about 55% of the total blood volume. It is the intravascular fluid part of extracellular fluid...
immunoglobulins in humans. IgG molecules are synthesized and secreted by plasma B cells.

IgG can bind to many kinds of pathogen
Pathogen
A pathogen gignomai "I give birth to") or infectious agent — colloquially, a germ — is a microbe or microorganism such as a virus, bacterium, prion, or fungus that causes disease in its animal or plant host...
s, for example virus
Virus
A virus is a small infectious agent that can replicate only inside the living cells of organisms. Viruses infect all types of organisms, from animals and plants to bacteria and archaea...
es, bacteria
Bacteria
Bacteria are a large domain of prokaryotic microorganisms. Typically a few micrometres in length, bacteria have a wide range of shapes, ranging from spheres to rods and spirals...
, and fungi, and protects the body against them by agglutination
Agglutination (biology)
Agglutination is the clumping of particles. The word agglutination comes from the Latin agglutinare, meaning "to glue."This occurs in biology in three main examples:...
and immobilization, complement activation
Complement system
The complement system helps or “complements” the ability of antibodies and phagocytic cells to clear pathogens from an organism. It is part of the immune system called the innate immune system that is not adaptable and does not change over the course of an individual's lifetime...
(classical pathway), opsonization for phagocytosis, and neutralization
Neutralisation (immunology)
Neutralisation in the immunological sense refers to the ability of antibodies to block the site on bacteria or viruses that they use to enter their target cell. One example of this within biology is a neutralizing antibody....
of their toxins. It also plays an important role in Antibody-dependent cell-mediated cytotoxicity(ADCC) and Intracellular antibody-mediated proteolysis, in which it binds to TRIM21
TRIM21
Tripartite motif-containing protein 21 also known as E3 ubiquitin-protein ligase TRIM21 is a protein that in humans is encoded by the TRIM21 gene. Alternatively spliced transcript variants for this gene have been described but the full-length nature of only one has been determined...
(the receptor with greatest affinity to IgG in humans) in order to direct marked virions to the proteasome
Proteasome
Proteasomes are very large protein complexes inside all eukaryotes and archaea, and in some bacteria.  In eukaryotes, they are located in the nucleus and the cytoplasm.  The main function of the proteasome is to degrade unneeded or damaged proteins by proteolysis, a chemical reaction that breaks...
in the cytosol. 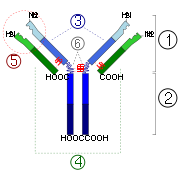 IgG antibodies are large molecules of about 150 kDa
KDA
KDA may refer to:* Karachi Development Authority* Kongsberg Defence & Aerospace* Kotelawala Defence Academy* Kramer Design Associates* Lithium diisopropylamide, KDA is the potassium analogue of lithium diisopropylamideOr kDa may refer to:...
composed of four peptide chains. It contains two identical heavy chains of about 50 kDa and two identical light chains of about 25 kDa, thus a tetrameric quaternary structure. The two heavy chains are linked to each other and to a light chain each by disulfide bonds. The resulting tetramer has two identical halves, which together form the Y-like shape. Each end of the fork contains an identical antigen
Antigen
An antigen is a foreign molecule that, when introduced into the body, triggers the production of an antibody by the immune system. The immune system will then kill or neutralize the antigen that is recognized as a foreign and potentially harmful invader. These invaders can be molecules such as...
binding site. The Fc regions of IgGs bear a highly conserved N-glycosylation site. The N-glycans attached to this site are predominantly core-fucosylated diantennary structures of the complex type. In addition, small amounts of these N-glycans also bear bisecting GlcNAc and α-2,6-linked sialic acid residues.

Immunoglobulin G has a low-frequency wave number of 28 cm−1 in the Raman spectra
Raman spectroscopy
Raman spectroscopy is a spectroscopic technique used to study vibrational, rotational, and other low-frequency modes in a system.It relies on inelastic scattering, or Raman scattering, of monochromatic light, usually from a laser in the visible, near infrared, or near ultraviolet range...
. This emission has been assigned to the breathing motion in the beta-barrel of nine beta-strands in its V

domain. The dynamic mechanism of the "chelate effect" and "trigger effect" of IgG has been analyzed from the angle of low-frequency resonance among the 12 beta-barrels of an IgG molecule.