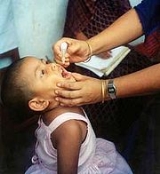 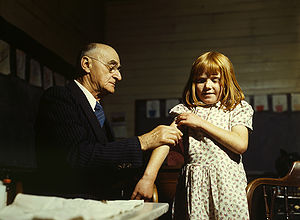 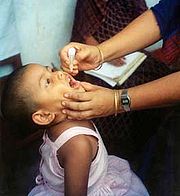 Immunization, or immunisation, is the process by which an individual's immune system
Immune system
An immune system is a system of biological structures and processes within an organism that protects against disease by identifying and killing pathogens and tumor cells. It detects a wide variety of agents, from viruses to parasitic worms, and needs to distinguish them from the organism's own...
becomes fortified against an agent (known as the immunogen
Antigen
An antigen is a foreign molecule that, when introduced into the body, triggers the production of an antibody by the immune system. The immune system will then kill or neutralize the antigen that is recognized as a foreign and potentially harmful invader. These invaders can be molecules such as...
).

When this system is exposed to molecule
Molecule
A molecule is an electrically neutral group of at least two atoms held together by covalent chemical bonds. Molecules are distinguished from ions by their electrical charge...
s that are foreign to the body (non-self), it will orchestrate an immune response, but it can also develop the ability to quickly respond to a subsequent encounter (through immunological memory). This is a function of the adaptive immune system
Adaptive immune system
The adaptive immune system is composed of highly specialized, systemic cells and processes that eliminate or prevent pathogenic growth. Thought to have arisen in the first jawed vertebrates, the adaptive or "specific" immune system is activated by the “non-specific” and evolutionarily older innate...
. Therefore, by exposing an animal to an immunogen in a controlled way, its body can learn to protect itself: this is called active immunization.

The most important elements of the immune system that are improved by immunization are the B cell
B cell
B cells are lymphocytes that play a large role in the humoral immune response . The principal functions of B cells are to make antibodies against antigens, perform the role of antigen-presenting cells and eventually develop into memory B cells after activation by antigen interaction...
s (and the antibodies
Antibody
An antibody, also known as an immunoglobulin, is a large Y-shaped protein used by the immune system to identify and neutralize foreign objects such as bacteria and viruses. The antibody recognizes a unique part of the foreign target, termed an antigen...
they produce) and T cell
T cell
T cells or T lymphocytes belong to a group of white blood cells known as lymphocytes, and play a central role in cell-mediated immunity. They can be distinguished from other lymphocytes, such as B cells and natural killer cells , by the presence of a T cell receptor on the cell surface. They are...
s. Memory B cell
Memory B cell
Memory B cells are a B cell sub-type that are formed following primary infection.-Primary response, paratopes, and epitopes:In wake of first infection involving a particular antigen, the responding naïve cells proliferate to produce a colony of cells, most of which differentiate into the plasma...
and memory T cells
Memory T cells
Memory T cells are a subset of infection- as well as potentially cancer-fighting T cells that have previously encountered and responded to their cognate antigen; thus, the term antigen-experienced T cell is often applied. Such T cells can recognize foreign invaders, such as bacteria or viruses,...
are responsible for a swift response to a second encounter with a foreign molecule. Passive immunization is when these elements are introduced directly into the body, instead of when the body itself has to make these elements.

Immunization be done through various techniques, most commonly vaccination
Vaccination
Vaccination is the administration of antigenic material to stimulate the immune system of an individual to develop adaptive immunity to a disease. Vaccines can prevent or ameliorate the effects of infection by many pathogens...
. Vaccines against microorganism
Microorganism
A microorganism or microbe is a microscopic organism that comprises either a single cell , cell clusters, or no cell at all...
s that cause disease
Disease
A disease is an abnormal condition affecting the body of an organism. It is often construed to be a medical condition associated with specific symptoms and signs. It may be caused by external factors, such as infectious disease, or it may be caused by internal dysfunctions, such as autoimmune...
s can prepare the body's immune system, thus helping to fight or prevent an infection
Infection
An infection is the colonization of a host organism by parasite species. Infecting parasites seek to use the host's resources to reproduce, often resulting in disease...
. The fact that mutation
Mutation
In molecular biology and genetics, mutations are changes in a genomic sequence: the DNA sequence of a cell's genome or the DNA or RNA sequence of a virus. They can be defined as sudden and spontaneous changes in the cell. Mutations are caused by radiation, viruses, transposons and mutagenic...
s can cause cancer
Cancer
Cancer , known medically as a malignant neoplasm, is a large group of different diseases, all involving unregulated cell growth. In cancer, cells divide and grow uncontrollably, forming malignant tumors, and invade nearby parts of the body. The cancer may also spread to more distant parts of the...
cells
Cell (biology)
The cell is the basic structural and functional unit of all known living organisms. It is the smallest unit of life that is classified as a living thing, and is often called the building block of life. The Alberts text discusses how the "cellular building blocks" move to shape developing embryos....
to produce proteins or other molecules that are unknown to the body forms the theoretical basis for therapeutic cancer vaccine
Cancer vaccine
The term cancer vaccine refers to a vaccine that either prevents infections with cancer-causing viruses, treats existing cancer or prevents the development of cancer in certain high risk individuals...
s. Other molecules can be used for immunization as well, for example in experimental vaccines against nicotine
Nicotine
Nicotine is an alkaloid found in the nightshade family of plants that constitutes approximately 0.6–3.0% of the dry weight of tobacco, with biosynthesis taking place in the roots and accumulation occurring in the leaves...
(NicVAX
NicVAX
NicVAX is a nicotine conjugate vaccine intended to reduce or eliminate physical addiction to nicotine. According to the U.S. National Institute on Drug Abuse, NicVAX can potentially be used to inoculate against addiction. This proprietary vaccine is being developed by Nabi Biopharmaceuticals of...
) or the hormone ghrelin
Ghrelin
Ghrelin is a 28 amino acid peptide and hormone that is produced mainly by P/D1 cells lining the fundus of the human stomach and epsilon cells of the pancreas that stimulates hunger. Ghrelin levels increase before meals and decrease after meals. It is considered the counterpart of the hormone...
(in experiments to create an obesity vaccine).

Immunization can be achieved in an active or passive manner: vaccination is an active form of immunization.

Active immunization entails the introduction of a foreign molecule into the body, which causes the body itself to generate immunity against the target. This immunity comes from the T cells and the B cells with their antibodies.

Active immunization can occur naturally when a person comes in contact with, for example, a microbe. If the person has not yet come into contact with the microbe and has no pre-made antibodies for defense (like in passive immunization), the person becomes immunized. The immune system will eventually create antibodies and other defenses against the microbe. The next time, the immune response against this microbe can be very efficient; this is the case in many of the childhood infections that a person only contracts once, but then is immune.

Artificial active immunization is where the microbe, or parts of it, are injected into the person before they are able to take it in naturally. If whole microbes are used, they are pre-treated, Attenuated vaccine.

Passive immunization occurs physiologically, when antibodies are transferred from mother to fetus
Fetus
A fetus is a developing mammal or other viviparous vertebrate after the embryonic stage and before birth.In humans, the fetal stage of prenatal development starts at the beginning of the 11th week in gestational age, which is the 9th week after fertilization.-Etymology and spelling variations:The...
during pregnancy
Pregnancy
Pregnancy refers to the fertilization and development of one or more offspring, known as a fetus or embryo, in a woman's uterus. In a pregnancy, there can be multiple gestations, as in the case of twins or triplets...
, to protect the fetus before and shortly after birth.

Artificial passive immunization is normally administered by injection
Injection (medicine)
An injection is an infusion method of putting fluid into the body, usually with a hollow needle and a syringe which is pierced through the skin to a sufficient depth for the material to be forced into the body...
and is used if there has been a recent outbreak of a particular disease or as an emergency treatment for toxicity (for example, for tetanus
Tetanus
Tetanus is a medical condition characterized by a prolonged contraction of skeletal muscle fibers. The primary symptoms are caused by tetanospasmin, a neurotoxin produced by the Gram-positive, rod-shaped, obligate anaerobic bacterium Clostridium tetani...
). The antibodies can be produced in animals ("serum therapy") although there is a high chance of anaphylactic shock because of immunity against animal serum itself. Thus, humanized antibodies produced in vitro
In vitro
In vitro refers to studies in experimental biology that are conducted using components of an organism that have been isolated from their usual biological context in order to permit a more detailed or more convenient analysis than can be done with whole organisms. Colloquially, these experiments...
by cell culture
Cell culture
Cell culture is the complex process by which cells are grown under controlled conditions. In practice, the term "cell culture" has come to refer to the culturing of cells derived from singlecellular eukaryotes, especially animal cells. However, there are also cultures of plants, fungi and microbes,...
are used instead if available.