Encyclopedia
An illustrated song is a type of performance art
Performance art
In art, performance art is a performance presented to an audience, traditionally interdisciplinary. Performance may be either scripted or unscripted, random or carefully orchestrated; spontaneous or otherwise carefully planned with or without audience participation. The performance can be live or...
and was a popular form of entertainment in the early 20th century in the United States.

Live performers (usually both a pianist and a vocalist) and music recordings were both used by different venues (vaudeville
Vaudeville
Vaudeville was a theatrical genre of variety entertainment in the United States and Canada from the early 1880s until the early 1930s. Each performance was made up of a series of separate, unrelated acts grouped together on a common bill...
houses first and later in nickelodeons) to accompany still images projected from glass slides. This allowed the images to be painted in color by hand. A single song was usually accompanied by 12 to 16 different images that sequentially "illustrated" the lyrics. Projection booths used either stereopticon
Stereopticon
A stereopticon is a slide projector or "magic lantern", which has two lenses, usually one above the other.These devices date back to the mid 19th century, and were a popular form of entertainment and education before the advent of moving pictures...
s with two projectors or machines that combined projection of both slides and moving pictures
Film
A film, also called a movie or motion picture, is a series of still or moving images. It is produced by recording photographic images with cameras, or by creating images using animation techniques or visual effects...
. Illustrated songs often preceded silent film
Silent film
A silent film is a film with no synchronized recorded sound, especially with no spoken dialogue. In silent films for entertainment the dialogue is transmitted through muted gestures, pantomime and title cards...
s and/or took place during reel changes, but some venues relied principally on illustrated songs alone. At least ten thousand small theaters nationwide featured illustrated songs. Illustrated songs were seen as a valuable promotional tool for marketing sheet music
Sheet music
Sheet music is a hand-written or printed form of music notation that uses modern musical symbols; like its analogs—books, pamphlets, etc.—the medium of sheet music typically is paper , although the access to musical notation in recent years includes also presentation on computer screens...
. Audience participation was encouraged, and repeat performances also helped encourage sheet music sales. 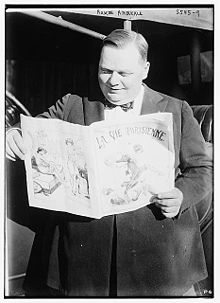 Several film stars began their careers as "models" who "illustrated" lyrics through a series of song slides. These stars included Roscoe Arbuckle, Fanny Brice
Fanny Brice
Fanny Brice was a popular and influential American illustrated song "model," comedienne, singer, theatre and film actress, who made many stage, radio and film appearances and is known as the creator and star of the top-rated radio comedy series, The Baby Snooks Show...
, Eddie Cantor
Eddie Cantor
Eddie Cantor was an American "illustrated song" performer, comedian, dancer, singer, actor and songwriter...
, George Jessel
George Jessel
George Jessel may refer to:*George Jessel , American actor*George Jessel , English jurist*George Jessel of the Jessel Baronets...
, Alice Joyce
Alice Joyce
Alice Joyce was an American actress, who appeared in more than 200 movies during the 1910s and 1920s, perhaps best known for her roles in the 1923 silent and 1930 talking versions of The Green Goddess....
, Florence Lawrence
Florence Lawrence
Florence Lawrence was a Canadian inventor and silent film actress. She is often referred to as "The First Movie Star." When she was popular, she was known as "The Biograph Girl," "The Imp Girl," and "The Girl of a Thousand Faces." Lawrence appeared in more than 270 films for various motion...
, and Norma Talmadge
Norma Talmadge
Norma Talmadge was an American actress and film producer of the silent era. A major box office draw for more than a decade, her career reached a peak in the early 1920s, when she ranked among the most popular idols of the American screen.Her most famous film was Smilin’ Through , but she also...
.