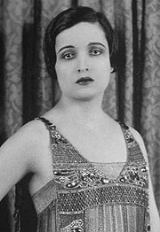 Encyclopedia
Alice Joyce was an American actress, who appeared in more than 200 movies during the 1910s and 1920s, perhaps best known for her roles in the 1923 silent
The Green Goddess (1923 film)
The Green Goddess is a 1923 silent adventure film based on play of the same name by William Archer. Set during the British Raj, it stars George Arliss as the Rajah of Rukh, into whose land arrive three British subjects, played by Alice Joyce, David Powell, and Harry T. Morey. Arliss and Ivan F...
and 1930 talking versions of The Green Goddess.

By 1900, her parent's marriage fell apart, and her father, John, took custody of little Alice and Frank and moved to Falls Church, Virginia
Falls Church, Virginia
The City of Falls Church is an independent city in Virginia, United States, in the Washington Metropolitan Area. The city population was 12,332 in 2010, up from 10,377 in 2000. Taking its name from The Falls Church, an 18th-century Anglican parish, Falls Church gained township status within...
, where Joyce spent most of her childhood. According to the 1910 Census, her mother, Vallie, remarried in 1900 to Leon Faber, and they resided in the Bronx, New York, along with Alice and her brother, Frank, where she was employed as a "photographer's model" and appeared in illustrated songs
Illustrated songs
An illustrated song is a type of performance art and was a popular form of entertainment in the early 20th century in the United States.Live performers and music recordings were both used by different venues to accompany still images projected from glass slides...
.

It was director Sidney Olcott
Sidney Olcott
Sidney Olcott was a Canadian-born film producer, director, actor and screenwriter.-Biography:Born John Sidney Alcott in Toronto, he became one of the first great directors of the motion picture business...
at the Kalem Company
Kalem Company
The Kalem Company was an American film studio founded in New York City in 1907 by George Kleine, Samuel Long , and Frank J. Marion.The company immediately joined other studios in the Motion Picture Patents Company that held a monopoly on production and distribution...
in New York City who gave Alice Joyce her first chance, casting her in his 1910 production, The Deacon's Daughter. She was eventually sent to work under director Kenean Buel
Kenean Buel
Kenean J. Buel was an American film director.Born in Kentucky, he became involved in theatre work and eventually made his way to New York City where he was hired by the Kalem Company in 1908 as a film director under the tutelage of Sidney Olcott...
on the West Coast
West Coast of the United States
West Coast or Pacific Coast are terms for the westernmost coastal states of the United States. The term most often refers to the states of California, Oregon, and Washington. Although not part of the contiguous United States, Alaska and Hawaii do border the Pacific Ocean but can't be included in...
after Kalem acquired the old Essanay Studios
Essanay Studios
The Essanay Film Manufacturing Company was an American motion picture studio. It is best known today for its series of Charlie Chaplin comedies of 1915.-Founding:...
property in East Hollywood in October 1913. Joyce spent time with Kalem (1910–1915) and Vitagraph (1916–1921), later worked as independent for various studios. Her stardom began to wane with the advent of sound motion pictures.

Alice Joyce was married three times, the first time in 1914 to actor Tom Moore
Thomas J. Moore
Thomas J. "Tom" Moore was an Irish-born American actor and director. He appeared in at least 186 motion pictures from 1908 to 1954...
with whom she had a daughter, Alice Joyce Moore (1916–1960). They divorced in 1920. The same year she married James B. Regan, son of the managing director of the old Knickerbocker Hotel
Knickerbocker Hotel (Los Angeles)
The Hollywood Knickerbocker Apartments, formerly the Knickerbocker Hotel, is a senior home 1714 Ivar Avenue in Los Angeles, California. Built in 1925 by E.M. Frasier in Spanish Colonial Revival style, the historic hotel catered to the region's nascent film industry, and is the site for some of...
; her second daughter was born during this union. They divorced in 1932. The actress eventually went bankrupt before she married for a third time. Her last marriage came in 1933 in Virginia City, Nevada
Virginia City, Nevada
Virginia City is a census-designated place that is the county seat of Storey County, Nevada. It is part of the Reno–Sparks Metropolitan Statistical Area. The population was 855 at the 2010 Census.- History :...
, to film director Clarence Brown
Clarence Brown
Clarence Brown was an American film director.-Early life:Born in Clinton, Massachusetts, to a cotton manufacturer, Brown moved to the South when he was 11. He attended Knoxville High School and the University of Tennessee, both in Knoxville, Tennessee, graduating from the university at the age of...
; they separated in 1942 and divorced in 1945. The actress retained Brown's name. During their separation, she sued him for reparation on cruelty charges. She resided in Northridge, California. In 1946. Brown remained with Joyce for nine hours after she was seriously injured in a traffic accident and paid her medical bills.

Joyce was known as "The Madonna of the Screen" for her striking features and presence. She made her last movie in 1930, after which she and ex-husband Tom Moore worked a late vaudeville
Vaudeville
Vaudeville was a theatrical genre of variety entertainment in the United States and Canada from the early 1880s until the early 1930s. Each performance was made up of a series of separate, unrelated acts grouped together on a common bill...
circuit for a time. She declared voluntary bankruptcy in 1933. Joyce was active in San Fernando Valley
San Fernando Valley
The San Fernando Valley is an urbanized valley located in the Los Angeles metropolitan area of southern California, United States, defined by the dramatic mountains of the Transverse Ranges circling it...
women's organizations in her later years. She did book reviews and made sketches for friends.

The actress was ill for several years before her death from a blood and heart ailment at Hollywood Presbyterian Hospital. She was 65 years old. On her passing in 1955, Alice Joyce was interred next to her mother, Vallie,in the San Fernando Mission Cemetery
San Fernando Mission Cemetery
The San Fernando Mission Cemetery is a Catholic cemetery located at 11160 Stranwood Avenue in the Mission Hills community of the San Fernando Valley of Los Angeles, California, near the San Fernando Mission....
in Mission Hills, Los Angeles, California
Mission Hills, Los Angeles, California
Mission Hills is a suburban community in the San Fernando Valley region of the city of Los Angeles, California.It is located near the northern junction of the Golden State Freeway and the San Diego Freeway . The Ronald Reagan Freeway bisects the neighborhood. Mission Hills is the northern...
. Alice Joyce was survived by two daughters, Mrs. Alice Moore de Tolley of Dover, Delaware
Dover, Delaware
The city of Dover is the capital and second largest city in the U.S. state of Delaware. It is also the county seat of Kent County, and the principal city of the Dover, Delaware Metropolitan Statistical Area, which encompasses all of Kent County. It is located on the St. Jones River in the Delaware...
and Mrs. Peggy Harris of Clark Fork, Idaho
Clark Fork, Idaho
Clark Fork is a city in Bonner County, Idaho, United States. The population was 536 at the 2010 census.-Geography:Clark Fork is located at ....
. The actress also had one grandchild and a nephew. She left an estate valued at $175,000, with a gross income of approximately $27,600. Her daughters received a collection of jewelry, including an eight-carat (1.6 g) emerald-cut diamond ring and a 55 carat (11 g) star sapphire ring. The remainder of the estate was placed in trust under terms of the will. The income from this was divided equally between Joyce's daughters.


Alice Joyce in the Media

In the fourth episode of the HBO television series Boardwalk Empire, Nights in Ballygran, Gillian Darmody (Gretchen Mol
Gretchen Mol
Gretchen Mol is an American actress and former model. She is known for her roles in films like Rounders, Celebrity, 3:10 to Yuma, The Thirteenth Floor,and The Notorious Bettie Page, where she played the title character...
) shows her son's fiancee Angela (Aleksa Palladino
Aleksa Palladino
Aleksa Palladino is an Italian American actress and singer, perhaps best known for her lead roles in Manny & Lo, The Adventures of Sebastian Cole, Find Me Guilty, Wrong Turn 2: Dead End, and Before the Devil Knows You're Dead.-Life and career:Palladino was born in New York City, where she grew up...
) an issue of Photoplay Magazine and asks casually if she thinks the actress on the cover is 'pretty.' Joyce is the actress depicted on the cover of this issue.