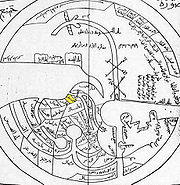 Muḥammad Abū’l-Qāsim Ibn Ḥawqal ' onMouseout='HidePop("97678")' href="/topics/Nisibis">Nisibis
Nisibis
Nusaybin Nisêbîn) is a city in Mardin Province, Turkey, populated mainly by Kurds. Earlier Arameans, Arabs, and Armenians lived in the city. The population of the city is 83,832 as of 2009.-Ancient Period:...
; travelled 943-969 CE) was a 10th century Muslim
Muslim
A Muslim, also spelled Moslem, is an adherent of Islam, a monotheistic, Abrahamic religion based on the Quran, which Muslims consider the verbatim word of God as revealed to prophet Muhammad. "Muslim" is the Arabic term for "submitter" .Muslims believe that God is one and incomparable...
writer, geographer, and chronicler. His famous work, written in 977, is called Ṣūrat al-’Arḍ (صورة الارض; "The face of the Earth").

What little is known of his life is extrapolated from his book, which was a revision and extension of the Masālik ul-Mamālik of Istakhri (951). That itself was a revised edition of the Ṣuwar al-aqālīm of Ahmed ibn Sahl al-Balkhi
Ahmed ibn Sahl al-Balkhi
Abu Zayd Ahmed ibn Sahl Balkhi was a Persian Muslim polymath: a geographer, mathematician, physician, psychologist and scientist. Born in 850 CE in Shamistiyan, in the Persian province of Balkh, Khorasan , he was a disciple of al-Kindi...
, who wrote about 921.

Ibn Hawqal was clearly more than an editor; he was a traveler who spent much of his time writing about the areas and things he had seen. He spent the last 30 years of his life traveling to remote parts of Asia
Asia
Asia is the world's largest and most populous continent, located primarily in the eastern and northern hemispheres. It covers 8.7% of the Earth's total surface area and with approximately 3.879 billion people, it hosts 60% of the world's current human population...
and Africa
Africa
Africa is the world's second largest and second most populous continent, after Asia. At about 30.2 million km² including adjacent islands, it covers 6% of the Earth's total surface area and 20.4% of the total land area...
. One of his travels brought him 20° south of the equator along the East Africa
East Africa
East Africa or Eastern Africa is the easterly region of the African continent, variably defined by geography or geopolitics. In the UN scheme of geographic regions, 19 territories constitute Eastern Africa:...
n coast. One of the things he noticed was that there were large numbers of people living in areas that the Greek
Ancient Greece
Ancient Greece is a civilization belonging to a period of Greek history that lasted from the Archaic period of the 8th to 6th centuries BC to the end of antiquity. Immediately following this period was the beginning of the Early Middle Ages and the Byzantine era. Included in Ancient Greece is the...
s, working from logic rather than experience, said must be uninhabitable (due to the belief that the earth
Earth
Earth is the third planet from the Sun, and the densest and fifth-largest of the eight planets in the Solar System. It is also the largest of the Solar System's four terrestrial planets...
was flat) .

His descriptions were accurate and very helpful to travelers. Ṣūrat al-’Arḍ included a detailed description of Muslim
Muslim
A Muslim, also spelled Moslem, is an adherent of Islam, a monotheistic, Abrahamic religion based on the Quran, which Muslims consider the verbatim word of God as revealed to prophet Muhammad. "Muslim" is the Arabic term for "submitter" .Muslims believe that God is one and incomparable...
-held Spain
Spain
Spain , officially the Kingdom of Spain languages]] under the European Charter for Regional or Minority Languages. In each of these, Spain's official name is as follows:;;;;;;), is a country and member state of the European Union located in southwestern Europe on the Iberian Peninsula...
, Italy
Italy
Italy , officially the Italian Republic languages]] under the European Charter for Regional or Minority Languages. In each of these, Italy's official name is as follows:;;;;;;;;), is a unitary parliamentary republic in South-Central Europe. To the north it borders France, Switzerland, Austria and...
and particularly Sicily
Sicily
Sicily is a region of Italy, and is the largest island in the Mediterranean Sea. Along with the surrounding minor islands, it constitutes an autonomous region of Italy, the Regione Autonoma Siciliana Sicily has a rich and unique culture, especially with regard to the arts, music, literature,...
. Ibn Hawqal recorded that the area of Fraxinet
Fraxinet
Fraxinet or Fraxinetum was the site of a tenth-century fortress established by Saracen pirates at modern La Garde-Freinet, near Saint-Tropez, in Provence...
(La Garde-Freinet
La Garde-Freinet
La Garde-Freinet is a commune in the Var department in the Provence-Alpes-Côte d'Azur region in southeastern France.It is a medieval French mountain village, located in the Massif des Maures, an hour north of St. Tropez. Accessible by picturesque winding roads, through forests of cork, oaks, and...
) was richly cultivated by its Muslim inhabitants, and they have been credited with a number of agricultural and fishing innovations for the region.