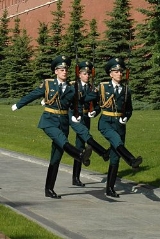 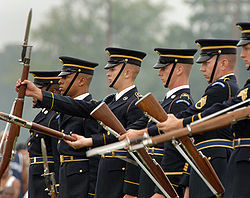 An honor guard, or ceremonial guard, is a ceremonial unit, usually military in nature and composed of volunteers who are carefully screened for their physical ability and dexterity. Only those persons who are highly motivated and maintain exceptionally high standards of appearance and conduct and show aptitude for ceremonial duty are likely to be considered.

A primary role for honor guards in the United States and some other countries is to provide funeral honors for fallen comrades and to guard national monuments. An honor guard may also serve as the "guardians of the colors" by displaying and escorting the national flag on ceremonial occasions at official state functions. Finally, honor guards usually provide detachments for review by visiting heads of state. Honor guards also serve in the civilian world for fallen police officers and other civil servants. Persons serving in this capacity may or may not be designated, meaning they may not be assigned to serve each and every time there is a funeral in their jurisdiction.

In the U.S., military honor guards may serve as ambassadors to the public, presenting a positive image of their service, and assisting with the recruiting effort.


Honor guards around the world 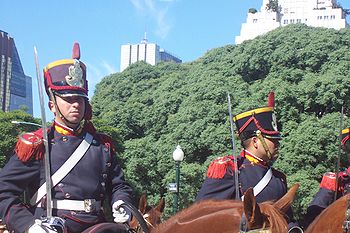 Regiment of Mounted Grenadiers (Argentina). Still serving as part of Argentine Army
Argentine Army
The Argentine Army is the land armed force branch of the Armed Forces of the Argentine Republic and the senior military service of the country.- History :...
. They are the presidential guard and ceremonial companion. Two unmounted grenadiers are step in front of the Pink House (la Casa Rosada
Casa Rosada
La Casa Rosada is the official seat of the executive branch of the government of Argentina, and of the offices of the President. The President normally lives at the Quinta de Olivos, a compound in Olivos, Buenos Aires Province. Its characteristic color is pink, and is considered one of the most...
) as symbol of ceremonial and honor guard.

Bulgarian guard of honor
National Guards Unit of Bulgaria
The National Guards Unit of Bulgaria is the successor of the Personal Cavalry Convoy of knyaz Alexander I, founded in 1879, when on July 12 the guards escorted the Bulgarian knyaz for the first time. Accordingly 12 July is the official holiday of the modern National Guard Unit...
(Bulgarian
Bulgarian language
Bulgarian is an Indo-European language, a member of the Slavic linguistic group.Bulgarian, along with the closely related Macedonian language, demonstrates several linguistic characteristics that set it apart from all other Slavic languages such as the elimination of case declension, the...
: Gvardeitsi) are guarding President's office in Sofia
Sofia
Sofia is the capital and largest city of Bulgaria and the 12th largest city in the European Union with a population of 1.27 million people. It is located in western Bulgaria, at the foot of Mount Vitosha and approximately at the centre of the Balkan Peninsula.Prehistoric settlements were excavated...
.

The Canadian guard of honour comes from all branches of the Canadian Forces
Canadian Forces
The Canadian Forces , officially the Canadian Armed Forces , are the unified armed forces of Canada, as constituted by the National Defence Act, which states: "The Canadian Forces are the armed forces of Her Majesty raised by Canada and consist of one Service called the Canadian Armed Forces."...
. The Canadian guard of honour participates in ceremonies such as Canada Day
Canada Day
Canada Day , formerly Dominion Day , is the national day of Canada, a federal statutory holiday celebrating the anniversary of the July 1, 1867, enactment of the British North America Act , which united three British colonies into a single country, called Canada, within the British Empire...
and in carrying fallen soldiers from transport planes arriving from Afghanistan
Afghanistan
Afghanistan , officially the Islamic Republic of Afghanistan, is a landlocked country located in the centre of Asia, forming South Asia, Central Asia and the Middle East. With a population of about 29 million, it has an area of , making it the 42nd most populous and 41st largest nation in the world...
.

The 37th Infantry Presidential Guard Battalion, composed of 5 companies, a historical company and 1 artillery battery
Artillery battery
In military organizations, an artillery battery is a unit of guns, mortars, rockets or missiles so grouped in order to facilitate better battlefield communication and command and control, as well as to provide dispersion for its constituent gunnery crews and their systems...
plus a military band
Military band
A military band originally was a group of personnel that performs musical duties for military functions, usually for the armed forces. A typical military band consists mostly of wind and percussion instruments. The conductor of a band commonly bears the title of Bandmaster or Director of Music...
, a fanfare trumpet section and Corps of Drums
Corps of Drums
A Corps of Drums is a type of military band, which originated in European armies in the 16th century. The main instruments of a Corps of Drums are the drum and the flute or fife. Unlike 'full' military marching bands, Corps of Drums exist within an infantry battalion. A Drum major is the leader of...
, is the President of Colombia
President of Colombia
The President of Colombia is the head of state and head of government of the Republic of Colombia. The office of president was established upon the ratification of the Constitution of 1819, by the Congress of Angostura, convened in December 1819, when Colombia was part of "la Gran Colombia"...
's honor guard service regiment. It's stationed at the Casa de Narino
Casa de Nariño
The Casa de Nariño or Palacio de Nariño is the official home and principal workplace of the President of Colombia. It houses the main office of the executive branch and is located in the capital city of Bogotá...
in Bogota
Bogotá
Bogotá, Distrito Capital , from 1991 to 2000 called Santa Fé de Bogotá, is the capital, and largest city, of Colombia. It is also designated by the national constitution as the capital of the department of Cundinamarca, even though the city of Bogotá now comprises an independent Capital district...
.

The Honor Guard in Hungary
Hungary
Hungary , officially the Republic of Hungary , is a landlocked country in Central Europe. It is situated in the Carpathian Basin and is bordered by Slovakia to the north, Ukraine and Romania to the east, Serbia and Croatia to the south, Slovenia to the southwest and Austria to the west. The...
was the MH 32. Budapest Őr- és Díszezred (HDF 32nd Budapest Guard and Ceremonial Regiment) until 31 December 2006, than disbanded. From 1 January 2007 was the Ceremonial Battalion branch, part of the MH Támogató Dandár (MH TD, HDF Support Brigade) until 31 December 2010. Converted from 1 January 2011 to Nemzeti Honvéd Díszegység (National Home Defense Ceremonial Band) as part of the MH TD and achieved the service from 25 April.

In India, the Guard of Honour is provided by men drawn from three services of the Indian military. The Indian Army, Indian Air Force and the Indian Navy.

In France, the Republican Guard serves as the guard of honor.

The Honor Guard in Mexico
Mexico
The United Mexican States , commonly known as Mexico , is a federal constitutional republic in North America. It is bordered on the north by the United States; on the south and west by the Pacific Ocean; on the southeast by Guatemala, Belize, and the Caribbean Sea; and on the east by the Gulf of...
is made up of members selected from the Navy, Army or Air force. Some of their duties include protection of the Mexican flag in Zocalo
Zócalo
The Zócalo is the main plaza or square in the heart of the historic center of Mexico City. The plaza used to be known simply as the "Main Square" or "Arms Square," and today its formal name is Plaza de la Constitución...
, and the raising and lowering of it. Also, are those who are selected from another scout (Mexican historic society: Eagle warrior and Cougar Warriors, schools, Sports centers, celebrities, etc...)

The Honor Guard in Poland
Poland
Poland , officially the Republic of Poland , is a country in Central Europe bordered by Germany to the west; the Czech Republic and Slovakia to the south; Ukraine, Belarus and Lithuania to the east; and the Baltic Sea and Kaliningrad Oblast, a Russian exclave, to the north...
is the Batalion Reprezentacyjny Wojska Polskiego (Ceremonial Battalion of Polish Forces) from 1 January 2001.

Honor guard service is carried out by all units of the Swedish Armed Forces
Swedish Armed Forces
The Swedish Armed Forces is a Swedish Government Agency responsible for the operation of the armed forces of the Realm. The primary task of the agency is to train, organize and to deploy military forces, domestically and abroad, while maintaining the long-term ability to defend the Realm in the...
although the Life Guards regiment
Life Guards (Swedish Army)
The Life Guards is a combined cavalry/infantry regiment of the Swedish Army, with responsibility for training. The infantry battalion trains ordinary infantry soldiers in both the mechanized and rifle roles, as well as training clerical soldiers. The Guards Battalion consists of three companies,...
(Livgardet) accounts for the main part of the honor guards.

The Grenadier company of the Life Guards is used as a honor guard at state visit welcoming ceremonies. A detachment of grenadiers is also used as honor guard at the opening of the Swedish parliament
Parliament of Sweden
The Riksdag is the national legislative assembly of Sweden. The riksdag is a unicameral assembly with 349 members , who are elected on a proportional basis to serve fixed terms of four years...
(Riksdagen), when an ambassador meets with the King at an audience to present his credential
Credential
A credential is an attestation of qualification, competence, or authority issued to an individual by a third party with a relevant or de facto authority or assumed competence to do so....
s and when the King attends an annual meeting of one of the Royal Academies
Swedish Royal Academies
The Royal Academies are independent organisations, founded on Royal command, that act to promote the arts, culture, and science in Sweden. The Swedish Academy and Academy of Sciences are also responsible for the selection of Nobel Prize laureates in Literature, Physics, Chemistry, and the Prize in...
.

Drabantvakt ("Royal Bodygard"), commonly known as Karl XI:s drabanter ("The Bodyguard of Charles XI
Charles XI of Sweden
Charles XI also Carl, was King of Sweden from 1660 until his death, in a period in Swedish history known as the Swedish empire ....
") and Karl XII:s drabanter ("The Bodyguard of Charles XII
Charles XII of Sweden
Charles XII also Carl of Sweden, , Latinized to Carolus Rex, Turkish: Demirbaş Şarl, also known as Charles the Habitué was the King of the Swedish Empire from 1697 to 1718...
") is a ceremonial guard used at state occasions such as state visits, investiture of a monarch, royal weddings and funerals etc. The guard was formed in 1860 based on historical royal bodyguards. The design of the uniforms of the guard is inspired by, but not identical to uniforms used during the reign of Carles XI and Charles XII respectively. The guard consists of 24 soldiers and one officer selected from the Life Guards.