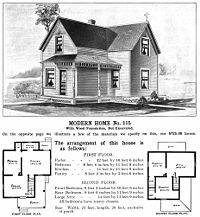 A home is a place of residence
Residence
The term residence may refer to:* House* Home* Nursing home* Residence in English family law, pertaining to where children should live in the case of disputes* Habitual residence, a civil law term dealing with the status of refugees, and child abduction...
or refuge
Safety
Safety is the state of being "safe" , the condition of being protected against physical, social, spiritual, financial, political, emotional, occupational, psychological, educational or other types or consequences of failure, damage, error, accidents, harm or any other event which could be...
. When it refers to a building, it is usually a place in which an individual or a family can rest and store personal property
Personal property
Personal property, roughly speaking, is private property that is moveable, as opposed to real property or real estate. In the common law systems personal property may also be called chattels or personalty. In the civil law systems personal property is often called movable property or movables - any...
. Most modern-day household
Household
The household is "the basic residential unit in which economic production, consumption, inheritance, child rearing, and shelter are organized and carried out"; [the household] "may or may not be synonymous with family"....
s contain sanitary facilities
Sanitation
Sanitation is the hygienic means of promoting health through prevention of human contact with the hazards of wastes. Hazards can be either physical, microbiological, biological or chemical agents of disease. Wastes that can cause health problems are human and animal feces, solid wastes, domestic...
and a means of preparing food
Cooking
Cooking is the process of preparing food by use of heat. Cooking techniques and ingredients vary widely across the world, reflecting unique environmental, economic, and cultural traditions. Cooks themselves also vary widely in skill and training...
. Animals have their own homes as well, either living in the wild or shared with humans in a domesticated environment. "Home" is also used to refer to the geographical area (whether it be a suburb
Suburb
The word suburb mostly refers to a residential area, either existing as part of a city or as a separate residential community within commuting distance of a city . Some suburbs have a degree of administrative autonomy, and most have lower population density than inner city neighborhoods...
, town
Town
A town is a human settlement larger than a village but smaller than a city. The size a settlement must be in order to be called a "town" varies considerably in different parts of the world, so that, for example, many American "small towns" seem to British people to be no more than villages, while...
, city
City
A city is a relatively large and permanent settlement. Although there is no agreement on how a city is distinguished from a town within general English language meanings, many cities have a particular administrative, legal, or historical status based on local law.For example, in the U.S...
or country
Country
A country is a region legally identified as a distinct entity in political geography. A country may be an independent sovereign state or one that is occupied by another state, as a non-sovereign or formerly sovereign political division, or a geographic region associated with a previously...
) in which a person grew up or feels they belong, or it can refer to the native habitat
Habitat
* Habitat , a place where a species lives and grows*Human habitat, a place where humans live, work or play** Space habitat, a space station intended as a permanent settlement...
of a wild animal. Sometimes, as an alternative to the definition of "home" as a physical locale ("Home is where you hang your hat
Hat
A hat is a head covering. It can be worn for protection against the elements, for ceremonial or religious reasons, for safety, or as a fashion accessory. In the past, hats were an indicator of social status...
"), home may be perceived to have no physical location—instead, home may relate instead to a mental or emotional state of refuge or comfort. Popular sayings along these lines are "Home is where the heart is" or "You can never go home again".

There are cultures in which members lack permanent homes, such as with nomadic
Nomad
Nomadic people , commonly known as itinerants in modern-day contexts, are communities of people who move from one place to another, rather than settling permanently in one location. There are an estimated 30-40 million nomads in the world. Many cultures have traditionally been nomadic, but...
people. 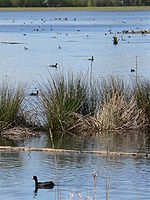 The word "home" can be used for various types of residential community institution
Institution
An institution is any structure or mechanism of social order and cooperation governing the behavior of a set of individuals within a given human community...
s in which people can live, such as nursing
Nursing home
A nursing home, convalescent home, skilled nursing unit , care home, rest home, or old people's home provides a type of care of residents: it is a place of residence for people who require constant nursing care and have significant deficiencies with activities of daily living...
, retirement home
Retirement home
A retirement home is a multi-residence housing facility intended for senior citizens. Typically each person or couple in the home has an apartment-style room or suite of rooms. Additional facilities are provided within the building, including facilities for meals, gathering, recreation, and some...
s for seniors, prison
Prison
A prison is a place in which people are physically confined and, usually, deprived of a range of personal freedoms. Imprisonment or incarceration is a legal penalty that may be imposed by the state for the commission of a crime...
s for criminals, treatment facilities, etc.), and foster homes. A home is generally a place that is close to the heart of the owner, and can become a prized possession.

In computer terminology, a 'home' may refer to a that branches off into other tasks, e.g. a homepage
Homepage
A home page or homepage has various related meanings to do with web sites:* It most often refers to the initial or main web page of a web site, sometimes called the front page ....
or a desktop
Desktop environment
In graphical computing, a desktop environment commonly refers to a style of graphical user interface derived from the desktop metaphor that is seen on most modern personal computers. These GUIs help the user in easily accessing, configuring, and modifying many important and frequently accessed...
. In a full screen editor, home is often used to mean the top-leftmost character cell, or the leftmost cell on a line in a line editor
Line editor
A line editor is a text editor computer program that manipulates text primarily by the display, modification, and movement of lines. Line editors precede screen-based text editors and originated in an era when a computer operator typically interacted with a teleprinter , with no video display, and...
. These are the initial ones used by left-to-right languages. A standard 101-key PC keyboard contains a Home key. Many home pages on the with introductory information, recent news or events, and links to subpage
Subpage
A subpage usually refers to a lower level web page in a website or wiki with the same main name as the starting level page plus a slash and text identifying the location of the subpage...
s. "Home" may also refer to a home directory
Home directory
A Home directory is a file system directory on a multi-user operating system containing files for a given user of the system. The specifics of the home directory is defined by the operating system involved; for example, Windows systems between 2000 and 2003 keep home directories in a folder...
which contains the personal files
Computer file
A computer file is a block of arbitrary information, or resource for storing information, which is available to a computer program and is usually based on some kind of durable storage. A file is durable in the sense that it remains available for programs to use after the current program has finished...
of a given user
User (computing)
A user is an agent, either a human agent or software agent, who uses a computer or network service. A user often has a user account and is identified by a username , screen name , nickname , or handle, which is derived from the identical Citizen's Band radio term.Users are...
of the computer system.

Since it can be said that humans are generally creatures of habit
Habituation
Habituation can be defined as a process or as a procedure. As a process it is defined as a decrease in an elicited behavior resulting from the repeated presentation of an eliciting stimulus...
, the state of a person's home has been known to physiologically influence their behavior
Behavior
Behavior or behaviour refers to the actions and mannerisms made by organisms, systems, or artificial entities in conjunction with its environment, which includes the other systems or organisms around as well as the physical environment...
, emotion
Emotion
Emotion is a complex psychophysiological experience of an individual's state of mind as interacting with biochemical and environmental influences. In humans, emotion fundamentally involves "physiological arousal, expressive behaviors, and conscious experience." Emotion is associated with mood,...
s, and overall mental health. The loss of a home (due to whatever reason, be it through accident or natural disaster, repossession
Repossession
Repossession is generally used to refer to a financial institution taking back an object that was either used as collateral or rented or leased in a transaction. Repossession is a "self-help" type of action in which the party having right of ownership of the property in question takes the property...
, or in the case of children simply the decision to move on the part of the parents) can be a valid cause of relocation.

Some people may become homesick
Homesickness
Homesickness is the distress or impairment caused by an actual or anticipated separation from the specific home environment or attachment objects....
when they leave their home over an extended period of time. Sometimes homesickness can cause a person to feel actual symptoms of illness.

It has been argued that psychologically "The strongest sense of home commonly coincides geographically with a dwelling. Usually the sense of home attenuates as one moves away from that point, but it does not do so in a fixed or regular way." Furthermore, places like homes can trigger self-reflection, thoughts about who one is or used to be or who one might become. These types of reflections also occur in places where there is a collective historical identity, such as Gettysburg
Battle of Gettysburg
The Battle of Gettysburg , was fought July 1–3, 1863, in and around the town of Gettysburg, Pennsylvania. The battle with the largest number of casualties in the American Civil War, it is often described as the war's turning point. Union Maj. Gen. George Gordon Meade's Army of the Potomac...
or Ground Zero
Ground zero
The term ground zero describes the point on the Earth's surface closest to a detonation...
.